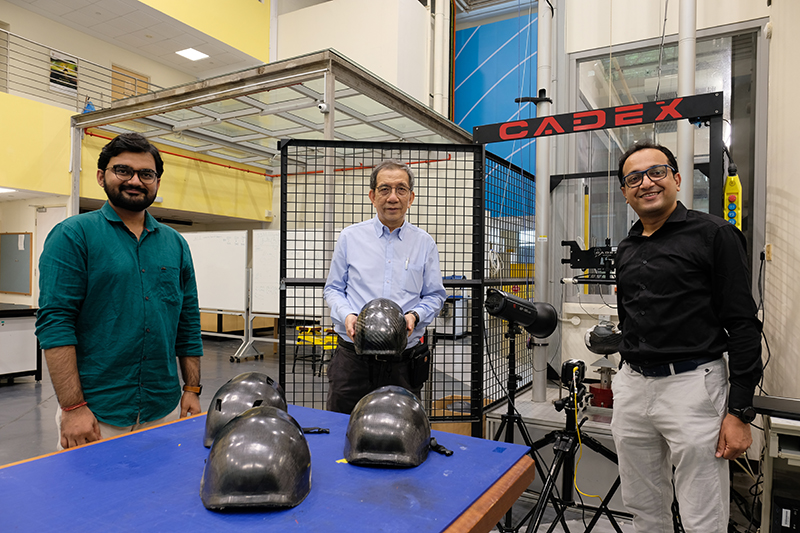 As cities worldwide expand their networks of cycling paths and more cyclists take to the streets, the chances of cycling accidents and potential collisions increase as well, underscoring the need for proper cycling safety in dense urban areas.

A team of researchers from NTU’s School of Mechanical and Aerospace Engineering, in collaboration with French specialty materials leader Arkema, have developed a safer bicycle helmet using a combination of materials.

The helmet’s outer shell is made from a new thermoplastic resin developed by Arkema named Elium® and is reinforced with carbon fibre. This reinforcement makes the outer shell tougher, stiffer, and less brittle than a polycarbonate shell.

It also increases the helmet’s contact time, which is the total time of impact in which the helmet experiences impact load.

These properties allow the outer shell to absorb more impact energy over a longer period, while also dissipating it evenly throughout the helmet. This results in less overall force reaching the head, thereby reducing the chances of critical injury.

To test their helmets, the team sent them hurtling at high speeds down at metal anvils with enough force to crack open a durian. The helmet’s composite outer shell was able to absorb the bulk of the impact, providing better results than current mass-produced helmets.

The NTU team worked with Arkema engineers to develop a moulding process for Elium® to manufacture stronger bicycle helmets. Helmets produced through their method would offer the same protection of current top-tier helmets, but potentially at the price of mid-tier helmets.