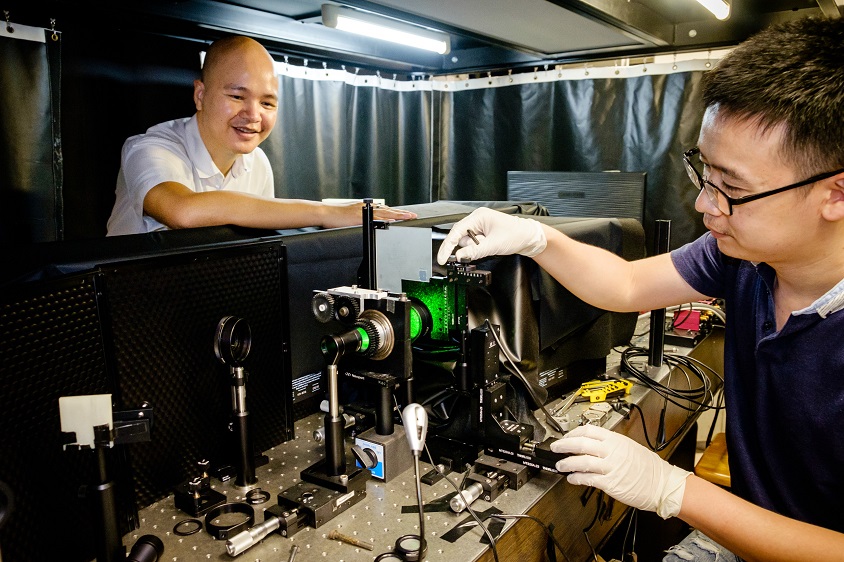 Being able to image cells or viruses that are underneath the skin or behind biofilms without the use of a microscope maybe a reality in future.

Asst Prof Steve Cuong Dang from the School of Electrical and Electronic Engineering and his team have developed a new algorithm that can reconstruct ultra-high-resolution images of objects as small as 100 nanometres, based on how light scatters off a membrane.

Called stochastic optical scattering localisation imaging, the technique was demonstrated in a laboratory set up consisting of a laser projector that shone an image on the back of an eggshell membrane, and a camera that took hundreds of photos of light scatter patterns from the front of the membrane.

Published in Nature Communications, this is the first time that scientists have shown that it is possible to produce images of what is behind translucent objects using a non-invasive technique, which holds promising applications for life sciences.

Director of imaging at Singapore Centre for Environmental Life Sciences Engineering, NTU Prof Peter Torok, who was not involved in this study, said that one of the most challenging tasks optical microscopists face is imagining through strongly scattering media.

Although other techniques have been developed to cope with this challenge, they are limited in terms of resolution, speed in processing images, and their need for contrast agents. In comparison, the new method by Asst Prof Dang’s team possesses several advantages over currently available methods.

With the image quality being eight times the limit of an optical microscope, it is on par if not better than those produced by ultra-high resolution microscopes that are currently used to study nanoscale objects.