Serial tinkerer third-year Renaissance Engineering Programme student Melvin Foo has a new feather in his cap: a fleet of self-driving delivery robots built by Whizz Mobility, a start-up he founded with his peers from NTU’s flagship interdisciplinary undergraduate engineering programme.

The five electric-powered robots have been trundling along pre-mapped routes around campus and even to the nearby CleanTech Park since June last year, delivering lunch and dinner orders as part of a pilot with Cates, a food delivery app developed by NTU-incubated start-up Wecome.

To date, the FoodBots have safely completed over 6,000 deliveries at designated food collection points. The enterprising students recently added a special 3pm to 4pm bubble tea delivery slot to sate demand for these thirst quenchers. 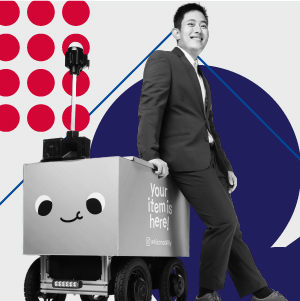 “It was such a surreal feeling when FoodBot first hit the ground running as Singapore’s first outdoor delivery robot,” says Melvin, 23. “We made the robots from scratch, including its navigation smarts.”

Armed with rugged wheels, onboard cameras and algorithms, the FoodBots deliver rain or shine with a “smile”. Each robot can carry a 50kg load and last a few days in between charges.

Curious students who have tried to waylay the robot may have heard the robot’s matronly reminder to leave it alone. Melvin lets on that his mother is the woman behind this voice-recorded message. “We wanted an authoritative voice, and I thought, nothing beats a mother’s stern tone,” he says with a grin.

Now vying for a slice of the food delivery pie, Whizz is going ahead full throttle, talking to potential food & beverage collaborators, and exploring the option of extending its delivery services to non-food partners.

“It was serendipity that we were already building our prototype when COVID-19 hit us at the start of last year,” says Melvin. “Pivoting into the food delivery market became timely when we plunged into a pandemic that sent demand for food deliveries soaring.”

And this is only the beginning, says Melvin. “Just like what the Internet did for the transmission of information, we want to make the vascular system of cities with our mobility solutions.”

The heat is on for these whizz kids!

This story was published in the Jan-Mar 2021 issue of HEY!.

Find the space to innovate