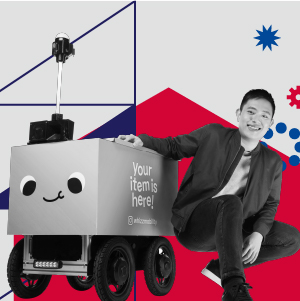 In a video that has been viewed over 148,000 times on TikTok, a food delivery rider humorously challenges an adorable blue box on wheels to a fight for encroaching on his territory. That blue box is the FoodBot. It is part of a fleet of self-driving food delivery robots developed by Renaissance Engineering Programme student Melvin Foo and his team at Whizz Mobility.

Since June 2020, the FoodBots have chalked up over 12,000 deliveries to hungry students on campus and others at the nearby CleanTech Park, an impressive feat for the five robots that were built from scratch in NTU.

“Most of the parts are 3D-printed and assembled on campus, and 80% of the technology, from algorithms to fleet management software, was developed by NTU undergrads in the maker labs provided to us right beneath our hall rooms,” says Melvin.

The founder of Whizz Mobility has always been a whiz kid. At nine, he began tinkering with technology. By the time he was 18, he had made smartphone apps, remote-controlled airplanes, smart security cameras and Internet of Things devices. When he couldn’t find the necessary parts for a robot he was planning to make, he built his own 3D printer to make them, using recycled factory discards and after countless hours of online research.

That love of innovation led Melvin to join NTU’s premier engineering programme, as he was keen to flex his inventive muscles whilst getting a world-class education. Graduating with a Master of Science in Technology Management is a bonus, he adds.

“Apart from the many engineering disciplines this programme offers, I liked that we could go abroad for a year. I wanted to visit and learn from tech hubs overseas and bring that knowledge back home. In addition, I was keen to take business modules as I wanted to run my own business.”

The serial inventor went from strength to strength in his first two years as an undergrad, buoyed by his work on the Nanyang Venture XI, which competed in the Shell Eco-Marathon, an annual competition that challenges global student teams to design, build and drive ultra energy-efficient vehicles.

“Working as part of an interdisciplinary and talented team of NTU students was an amazing experience. We all handled different aspects of the car, which became a source of pride and joy for us when everything came together in the end,” recalls Melvin.

“The techniques I picked up from working on the car were used to great success when I was developing the FoodBot. If you think about it, a robot is not so different from a really small electric vehicle.”

Find the space to innovate

On a quest to build the best deal discovery website

Encouraged by the culture of innovation and interdisciplinary learning at NTU, Gabriel Sze has turned his passion project into a successful business.