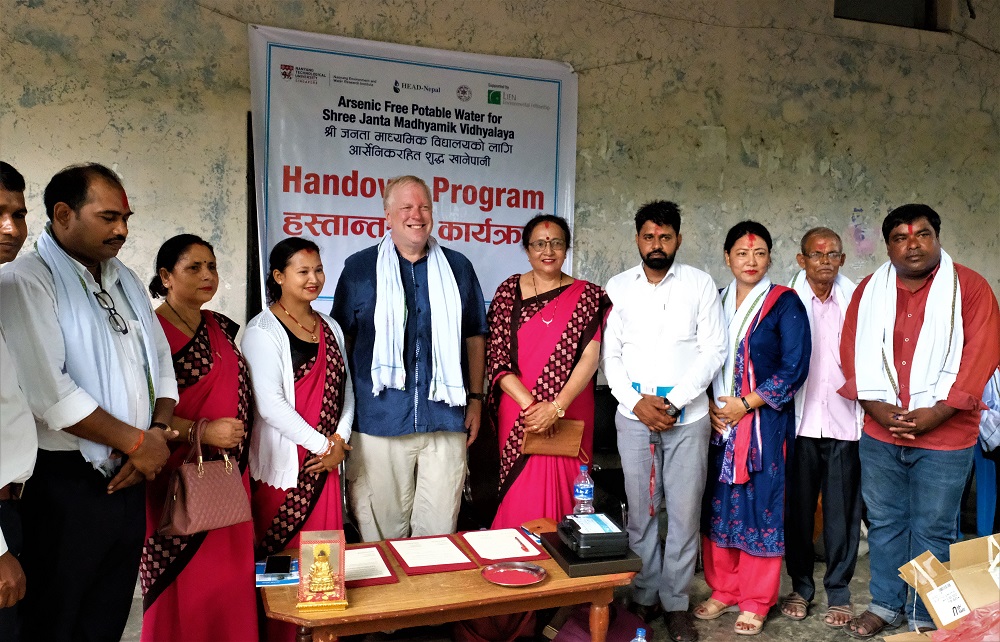 Photo: The clean water facility at the Shree Janta Secondary School was officially handed over to the school management on Wednesday, 15 June 2022, at a ceremony attended by NTU Singapore's Professor Shane Snyder (5th from left), Executive Director of NEWRI, and HEAD-Nepal representatives.

In some parts of Nepal, people have difficulties accessing clean and safe drinking water. This is due to reliance on hand-pumps which draw water directly underground without treatment, and a lack of awareness on the dangers of drinking water obtained in such a manner.

Without treatment, water drawn from the ground may contain chemicals such as arsenic, a cancer-causing toxic chemical, is fatal in high doses. Elevated arsenic levels in groundwater used for consumption purposes in parts of Nepal is an ongoing public health concern.

Past studies have found that Nepal’s Nawalparasi district is a severely arsenic affected area. A proportion of its tube-wells were found with arsenic concentration above 50 parts per billion (ppb) - above the WHO recommended limit of 10 ppb.

To help prevent health issues for people without access to clean water, scientists from NTU Singapore and Nepal have constructed a clean water facility for children at the Shree Janta Secondary School and their communities.

Located in the in the Newalparasi district, the clean water facility comprises three 1,000 litre tanks arranged in a descending order. The sedimentation tank is placed at the highest stand. Here, particles suspended in water are allowed to settle out. Next, the water gets transferred to the middle tank, where it is filtered using a combination of iron nails, brick chips and sand. Crucial to this process are the iron nails, which are known to be an excellent adsorbent for arsenic. Once the arsenic-toxic element is absorbed, the clean water is stored safely in the third and lowest tank, where users can easily access through taps.

The design of the bio-sand filter system is simple, which makes it a sustainable option when we consider operations and maintenance in the long run, said Professor Shane Snyder, Executive Director of NTU’s Nanyang Environment and Water Research Institute (NEWRI), which provided the engineering and technical expertise for the water facility construction through its philanthropic arm NEWRI Community Development (NEWRIComm).

The project is supported by the Lien Environmental Fellowship (LEF), a non-profit programme that empowers leading academics and researchers from ASEAN, South Asia, and Central Asia to tackle water and sanitation challenges in their home countries.

While there have been many initiatives to build clean facilities for the arsenic affected Newalparasi district, a lack of technical support for operation and maintenance of such filtration systems meant that there are few who could help repair the facilities whenever they malfunction, leaving the community with little choice but to fall back to drinking untreated water.

Aside from ensuring sustained clean water access, the project team will also be embarking on education campaigns at the school to raise awareness about arsenic-induced health risks among the community. It is hoped that students will then be able to help promote safe drinking water habits in their own households.

“Many local people living in the school area are not sufficiently aware of the health risks involved in drinking untreated water and are not ready to change their behaviour. We believe young children can become change agents within their own communities too, once we empower them with the right knowledge,” said Dr Makhan Maharjan, Programme Director of the non-profit organisation Health and Environment Development, Nepal (HEAD-Nepal), who is the project implementer and LEF fellow.

Already, a similar project completed by the NTU-Nepalese team at the Saraswati Secondary School in 2020 has shown positive impact on more than 300 students and their communities.

The second site at Shree Janta Secondary School this year is expected to benefit more than 600 students and staff at the school, more than double the number of the inaugural project.

The clean water facility at the Shree Janta Secondary School was officially handed over to the school management on Wednesday, 15 June 2022, at a ceremony attended by NTU Singapore and HEAD-Nepal representatives. 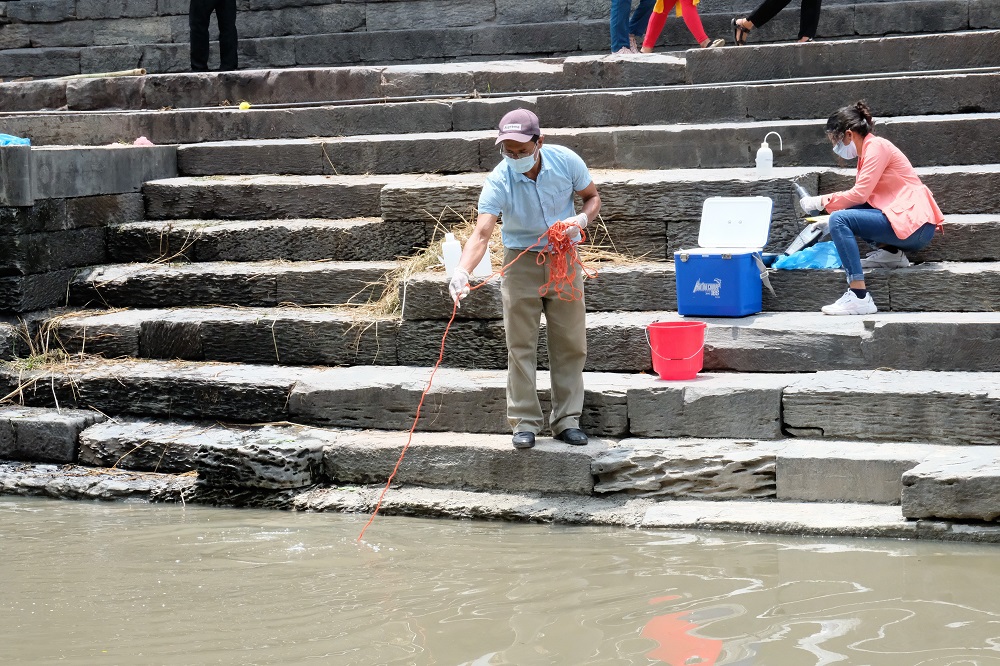 Photo: Dr Makhan Maharjan and a research assistant collecting samples near the Pashupatinath Temple to assess the water quality of the Bagmati River.

With the project at the school now completed, the scientists will next be focusing on water quality research at the Bagmati River which runs through the Kathmandu Valley.

The clean-up of the Bagmati River has been a priority of the Nepalese government, and the scientists hope to trace the organic contaminants found in the river through their research, to reveal the extent of the water pollution.

Findings of the study are expected to reveal the extent of water pollution and help to advocate for preservation of the river in future.