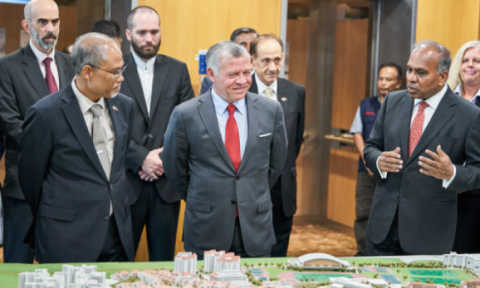 His Majesty King Abdullah II of Jordan and his delegation visited the NTU Smart Campus and learnt more about NTU's flipped classroom pedagogy and technological innovations.

King Abdullah, who is in Singapore for his third state visit, was hosted by NTU President Prof Subra Suresh and senior university leaders on his arrival at the University's Administration Building. The King was accompanied by HRH Prince Hashim, His Majesty's chief Royal councillor, and HRH Prince Ghazi, His Majesty's chief adviser for religious and cultural affairs and personal envoy. Minister for the Environment and Water Resources Masagos Zulkifli and senior government officials were also present. 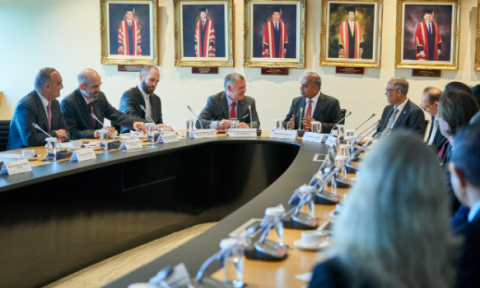 After an introduction, the King was given a presentation of NTU's programmes, including the University's flipped classroom pedagogy and the National Institute of Education's unique role in preparing every teacher and school leader for Singapore's education system. 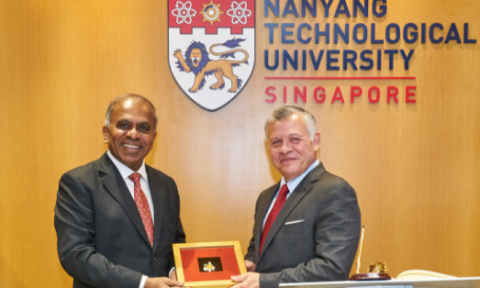 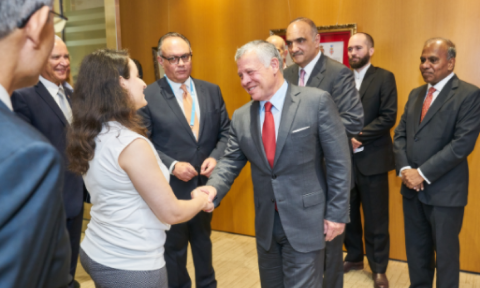 His Majesty then signed the University guestbook, in which he wrote: "A pleasure to visit this extraordinary institution and see first-hand its latest innovative technology in education. Special thanks to Prof Suresh for the gracious hospitality." To commemorate the visit, Prof Suresh presented the University flower, Dendrobium Nanyang, plated in rhodium and gold to King Abdullah. 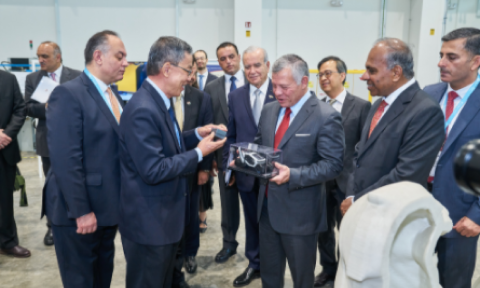 His Majesty also spent a few moments speaking to NTU PhD student Sirin Fayez Saleem Haddad from Jordan who is specialising in autonomous vehicles. Sirin, who has been studying in Singapore for the past 2 1/2 years, said, "I never expected to meet the King when I was coming to Singapore. I was very excited to meet His Majesty, and he gave me some nice words of encouragement."

The King also toured NTU's Singapore Centre for 3D Printing, where he was given a presentation on the Centre's latest technology that can 3D-print a bathroom unit within a day, as well as other cutting edge technologies such as bioprinting, and the translation of these advanced technologies for industrial applications.

King Abdullah, who graduated from Sandhurst Royal Military Academy and went on to become an elite Cobra attack helicopter pilot, also took some time to visit NTU's Air Traffic Management Research Institute, where he was briefed on its 13-metre wide aerodrome control tower simulator that simulates the working environments of the Changi Airport Control Tower Cabin with a 360 degree-view of the aerodrome.

Earlier in the day, His Majesty delivered a keynote address at the inaugural International Conference on Cohesive Societies at the Raffles City Convention Centre organised by the S. Rajaratnam School of International Studies (RSIS) at NTU.