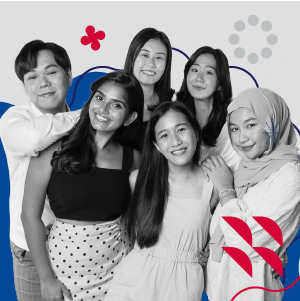 These communication undergrads took part in a global competition as a class project in integrated platform advertising and ended the term as world champions, with US$1,000 and US$500 in prize money.

For the six students, Nurfatin Rahim, Janessa Tan, Tiffany Chee, Abner Chong, Charmaine Goh and Sejal Bagaria, the odds were stacked against them as they were taking part in a United States-based competition dominated by American varsity teams.

However, the NTU students, who formed two teams of three students each, took home the first and second prize at the Digital Marketing Competition organised by weight loss company Wondr Health in December last year.

“We had little understanding of the consumer markets outside Singapore, but we used Reddit and Twitter to gather opinions and attitudes of American consumers on various weight loss programmes,” reveals Janessa, who is from the champion team. Her team also took home the Data-Driven Award as the judges recognised the value of their well-researched pitch.

The win wouldn’t have been possible, say the undergrads, without the perks of an NTU education.

“Our class lecturer, Ms Wong Pei Wen, invited numerous top-level executives from Google and TikTok to show us the inner workings of their business, including how advertising buys actually work. In addition to these guest lecturers, we were also directly mentored by an associate director at a media buying agency,” recalls Charmaine.

“Nothing beats learning from the industry giants themselves. I can confidently say I picked up programmatic advertising from Google – and this is going to make my CV stand out,” adds Sejal.

The in-depth insights and direct mentorship made a huge difference to the way both teams crafted their campaign strategy for the competition, they reveal.

“We sent our ideas and presentations to the industry experts for their feedback, and I remember learning a lot from their comments and criticisms. Education doesn’t get more ‘real’ than that!” laughs Nurfatin.

Sejal agrees: “Our group sent them a long list of questions, which they so patiently answered in detail.”

More than just award-winning advice from top executives, the students also got an authentic look at advertising as a career, both the positives and downsides, says Abner.

“We had mentors from customer engagement firms, advertising research agencies, media buying companies and big tech. This breadth of knowledge gained may not even be possible with internships,” says Janessa.

NTU. It all starts here.

Skills for the ever changing business landscape