NTU Singapore welcomed the Prime Minister of India, His Excellency Narendra Modi, on 1 June 2018, where he received a warm reception from the NTU community, including NTU's Pro-Chancellors, Chairman, Board members, senior leadership, faculty, students and alumni, as well as distinguished guests.

In his welcome address, NTU President Prof Subra Suresh noted how NTU's close partnership with India had led to research collaborations with almost 170 Indian institutions, and that working together in the age of the Fourth Industrial Revolution would "contribute to the betterment of our society and create a better future for everyone, especially in Asia".

Together with Singapore's Education Minister, Mr Ong Ye Kung, Prime Minister Modi witnessed the exchange of six landmark agreements and statements of intent to advance innovation for the digital age. 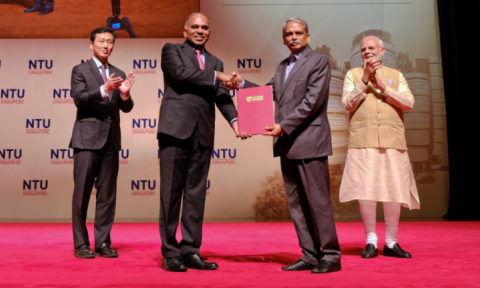 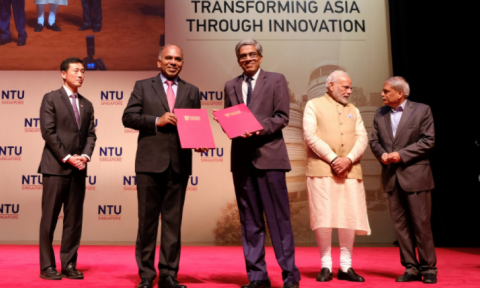 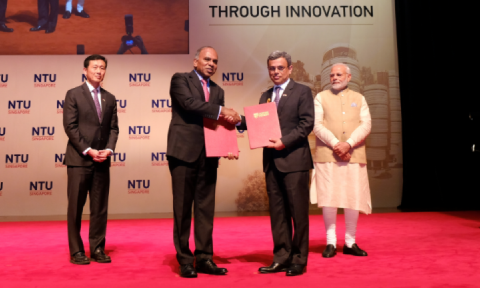 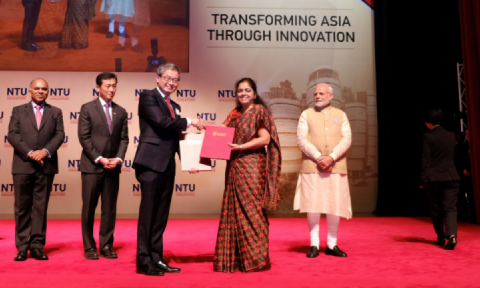 A generous S$4 million gift from Mr Kris Gopalakrishnan, Chairman of Axilor Ventures and co-founder and former CEO of Indian IT giant Infosys, was also announced at the event.

Of the S$4 million, S$2 million will go towards creating the Gopalakrishnan-NTU Presidential Postdoctoral Fellowship that will enable some of the world’s most promising postdoctoral candidates to carry out their research at NTU.
Of the other S$2 million, the Indian Institute of Science (IISc) Bangalore and Indian Institute of Technology (IIT) Madras will each receive about S$1 million, which will fund research collaborations for their students at NTU.

In his introduction of Prime Minister Modi, Education Minister Ong Ye Kung said India is set to become the most populous nation on our planet, and is a continent of creativity, boosted by reforms under PM Modi’s leadership. He added that Singapore was proud to be a steadfast partner of India. At a dialogue session with Prof Suresh on the topic, “Transforming Asia Through Innovation”, Prime Minister Modi congratulated NTU for providing a glimpse of the future through its innovative, life-changing research, adding: “NTU is giving birth to a new world.”

He gave examples of India’s navigation of the digital age through the use of space and satellite technologies, and said that “disruption” from the Fourth Industrial Revolution could bring together human talent and creativity in positive outcomes if paired with human values.

Throughout the session in the Nanyang Auditorium, he drew laughter with his witty replies. Earlier in the afternoon, His Excellency Modi toured an exhibition of NTU’s innovations. He took a special interest in AI-driven technologies and celebrity social robot Nadine, as well as NTU-made satellites and Singapore’s first 3D-printed eco-friendly car. He also previewed technology-enhanced learning at NTU and novel applications developed by NTU researchers for healthcare and the environment. 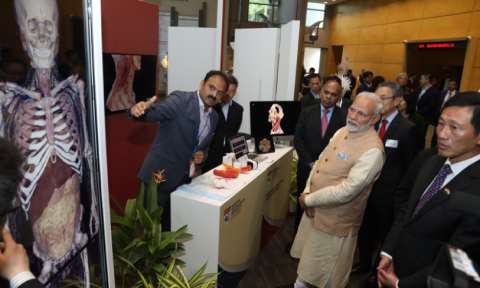 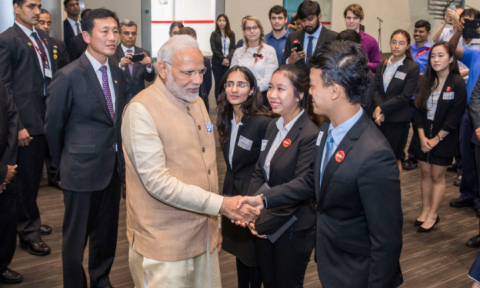 Prime Minister Modi, Prof Suresh and Minister Ong also planted a Neem tree as a symbol of strong bilateral ties and the flourishing of new ideas and partnerships.​ 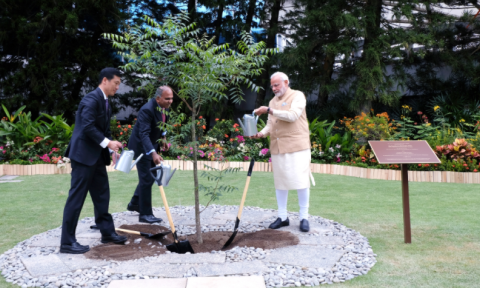 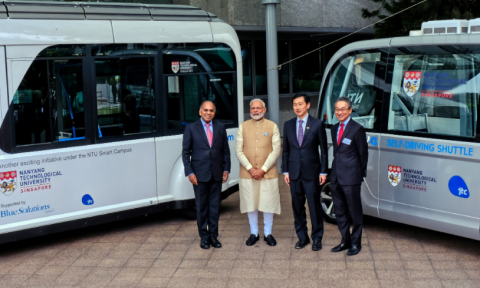