A five-year study by a team of researchers from LKCMedicine and Singapore General Hospital (SGH) reveals how mutations in a crucial gene called DDX3X are the key reason why some lymphoma patients do not respond to chemotherapy. 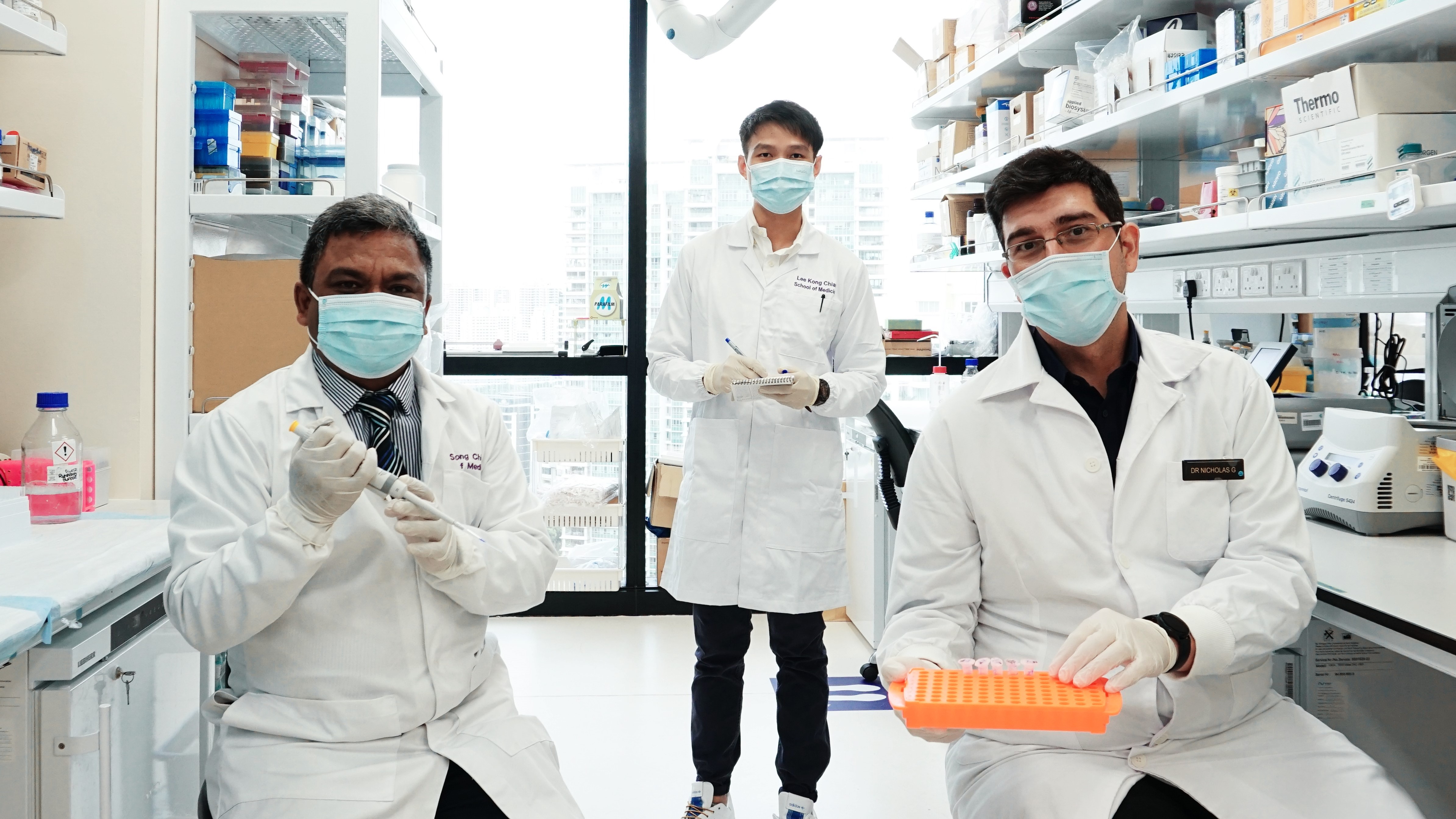 Majority of patients with aggressive forms of non-Hodgkin lymphoma do not respond well to traditional therapy. A sub-group of patients who respond initially suffer relapses and progress to fatal outcomes.

To unravel the puzzle of why chemotherapy fails in certain patients with non-Hodgkin lymphoma, the research team led by LKCMedicine Assistant Professor Navin Verma and Assistant Professor Nicholas Grigoropoulos, Senior Consultant from the Department of Haematology at SGH, scrutinised the publicly available genetic database of more than 1,000 patients in the United Kingdom. In addition, the team also analysed 167 non-Hodgkin lymphoma specimens from UK patients in collaboration with research groups from the University of Cambridge (UK).

Through advanced gene sequencing technology, the research team mapped cancer-causing gene abnormalities from samples of patients where chemotherapy treatment has failed. They found that mutations in the gene DDX3X – a type of protein responsible for processing and transmitting signals for cell growth – are the possible culprit behind the resilience of cancer cells. This finding was later confirmed using cutting-edge molecular techniques.

The researchers combined their genetic data findings and those from previous studies and found through advanced analysis that lymphoma patients with DDX3X mutations had a significantly lower survival rate than those without such mutations. They also found that DDX3X mutations lead to increased STAT activity – a type of signalling mechanism that allows cancer cells to survive.

Delving further into their investigations, the team tested the STAT3 inhibitors – a substance and member of the STAT family that interferes with biologic activity including growth and proliferation – and discovered that these inhibitors killed lymphoma cells with DDX3X mutation (or altered DDX3X) more effectively than standard chemotherapy agents.

Pending further research, these findings provide hope that new and better drugs could be developed to block STAT activity and therefore improve the chances of survival for non-Hodgkin lymphoma patients with DDX3X mutations. Clinicians may in future be able to test for such mutations to have a better gauge of chemotherapy outcomes for patients with non-Hodgkin lymphoma.

Asst Prof Navin said, “Now that we know DDX3X mutations are what make some cancer cells difficult to kill with chemotherapy, it is possible to identify patients with such mutations through lab tests before treatment starts. Early identification will allow clinicians to have a better understanding of general chemotherapy outcome for this group of cancer patients and enable them to offer personalised therapy from the get-go, buying precious time that would otherwise be spent on futile chemotherapy.”

The findings were published in the scientific journal Molecular Cancer in October 2021 and shed light on aggressive forms of non-Hodgkin lymphoma and provide insights into possible new therapy options for this group of patients with poor chances of survival.

Located on the X chromosome, the gene DDX3X processes cell information and transmits signals for cell growth. While past research studies have associated the gene’s involvement in many types of cancer, its role in non-Hodgkin lymphoma has not been studied at detailed molecular levels until now. 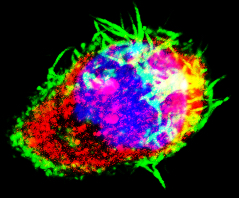 Pictured is a cultured cell of cutaneous T-cell lymphoma. The DDX3X protein is shown in red. Actin and nucleus are shown in green and blue to demarcate cell cytoplasm and nuclear area, respectively.

Asst Prof Grigoropoulos said, “We leveraged our extensive clinical experience in treating patients with lymphoma at the Singapore General Hospital to design and execute the research and proved that DDX3X mutation is associated with chemotherapy resistance. But more needs to be done. We are now continuing our research efforts and actively developing new drugs as well as diagnostics to help those with DDX3X mutations, not only in lymphoma, but other common cancers as well.”

Highlighting the significance of being able to access and use non-Hodgkin lymphoma specimens for their study, the research team added that without these specimens, research hypotheses and theories will remain as they are and there will be no treatment or a better way of diagnosing cancers.

Moving forward, the researchers are looking to conduct further research that could lead to the development of new cancer drugs based on their insights into DDX3X, which has the potential to be used as a target for a better cure for lymphoma and beyond.