A team of interdisciplinary researchers led by LKCMedicine Nanyang Assistant Professor Yasunori Saheki discovered a cellular mechanism that regulates cholesterol, paving the way for potential treatments for neurodegenerative diseases such as Alzheimer’s and Parkinson’s diseases.

Like all cells of the body, neurons are enclosed by the plasma membrane, which is built up primarily by lipids, especially cholesterol. Cholesterol is a major building-block of the plasma membrane and is important for the function of various organs, including the brain.

Despite decades of research on cholesterol metabolism, it remained unclear how cells detect the amount of cholesterol in the plasma membrane and adjust its production and uptake.

The researchers found how exactly cells monitor cholesterol levels in the plasma membrane and pass that information to the cell’s internal organ, called the endoplasmic reticulum, where cholesterol production and uptake are controlled.

Their findings were published in The EMBO Journal on 19 February 2021. 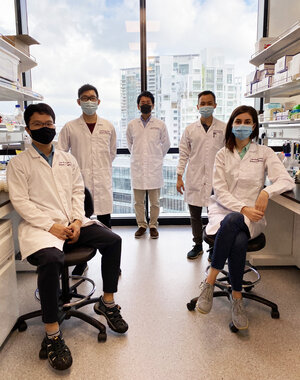 “These discoveries firmly established the crucial role of GRAMD1 proteins in maintaining cholesterol homeostasis. This opens new doors for developing a potentially new therapeutic approach to block or facilitate cholesterol transport inside neurons to counteract cholesterol metabolism defects that are observed in some neurodegenerative conditions,” said Asst Prof Saheki.

The study expands on an earlier study published in eLife in 2019. In that study, Asst Prof Saheki led a team of researchers from LKCMedicine, the National University of Singapore and Kumamoto University, Japan.

In that study, the researchers found that GRAMD1 proteins transport cholesterol inside cells and facilitate the communication between the plasma membrane and the endoplasmic reticulum.

Going forward, Asst Prof Saheki said the team is planning to identify small molecules (prototype of drugs) that can inhibit or enhance the function of GRAMD1 proteins.

“By doing so, we hope to discover an effective approach to prevent or even reverse the progression of neurodegenerative disorders, such as Alzheimer’s and Parkinson’s diseases,” he added.