Communicating with a patient who speaks in a dialect, coping with the death of a patient, and watching a patient fully recover. These are some experiences that current LKCMedicine Year 5 students gained in their first month of the Student Assistantship Programme (SAP).

The SAP is a nine-week programme which ends on 2 April 2021, covering three core specialities: General Medicine, Family Medicine, and General or Orthopaedic Surgery. During the programme, our final-year students join other healthcare teams across Singapore to prepare for life after medical school. 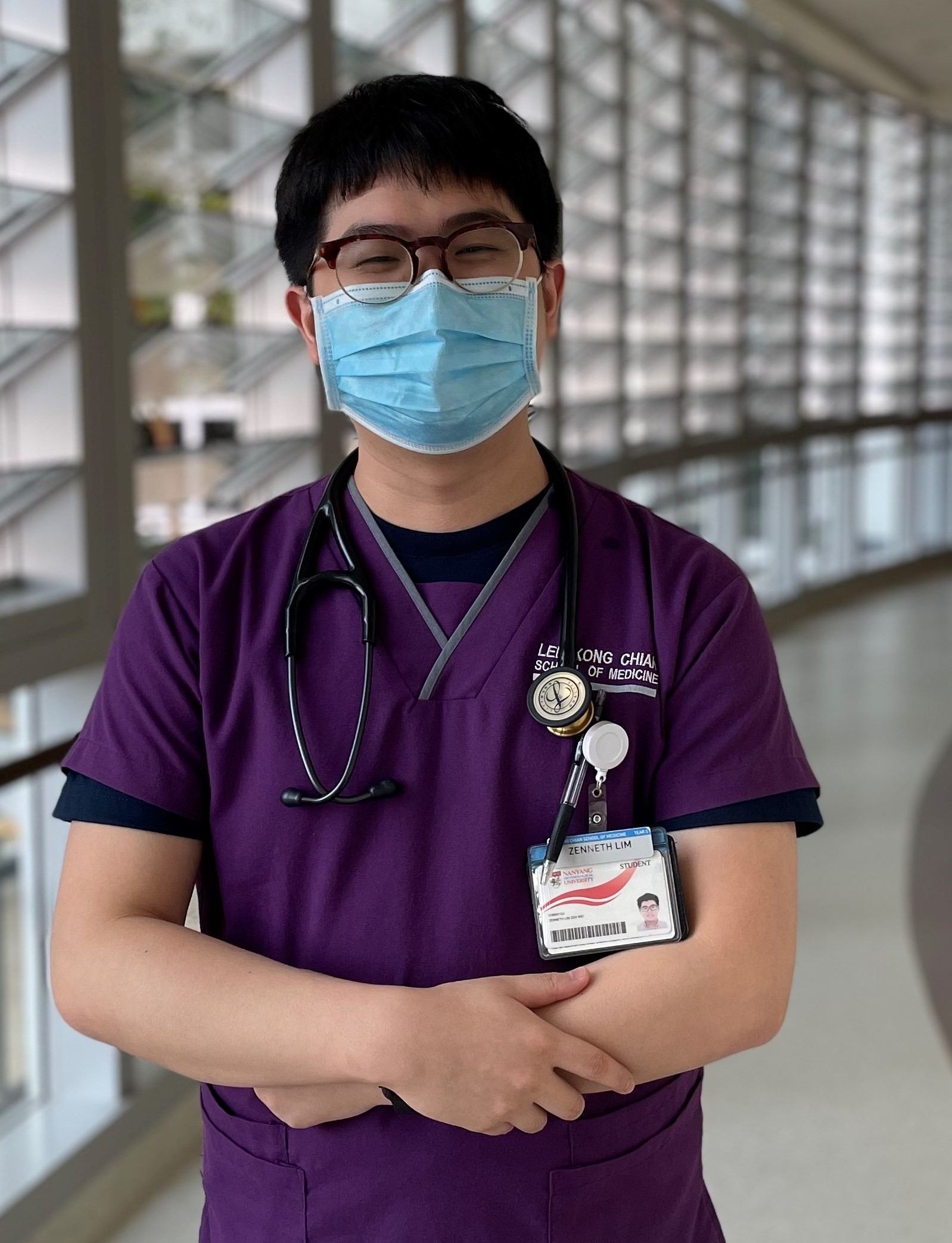 “While my previous postings in my clinical years revolved around clinical education and honing our clinical skills of history and physical examination, this time round it was mainly learning the ropes of how to become an effective soon-to-be PGY1 doctor,” said Zenneth Lim, who started his posting at the Department of General Surgery at Khoo Teck Puat Hospital (KTPH).

His classmate, Gayatiri Raveentheran, who began her posting at Singapore General Hospital’s Internal Medicine Department, said the SAP has been an eye-opening experience. “The SAP has given me a taste of what life as a houseman in the wards will be like. I am thrilled to be finally able to put whatever I have learnt in medical school into practice,” said Gayatiri. 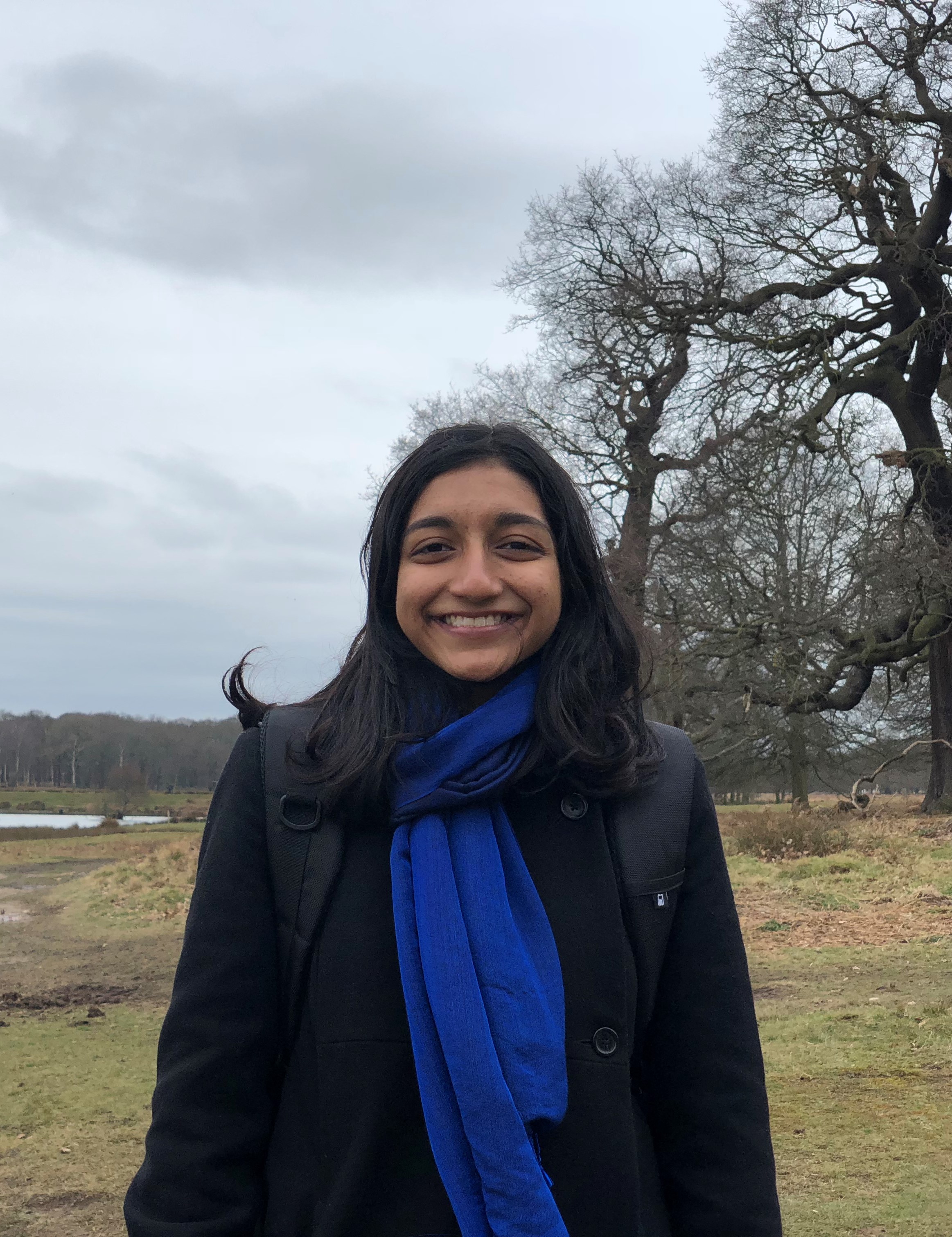 Life in the healthcare workforce

Transiting from being a medical student to a junior doctor is a big jump. The Class of 2021 is no longer observing patient care from the sidelines during clinical rotations in their clinical years. Today, they are expected to give their inputs on how to manage patients’ medical conditions and perform procedures as part of a larger medical team.

Starting his day at 7am, Jeremy clerks the patients that he is taking charge of. This involves checking in with the patient and carrying out the necessary history taking, physical examinations, and documenting his proposed investigations and management plans. 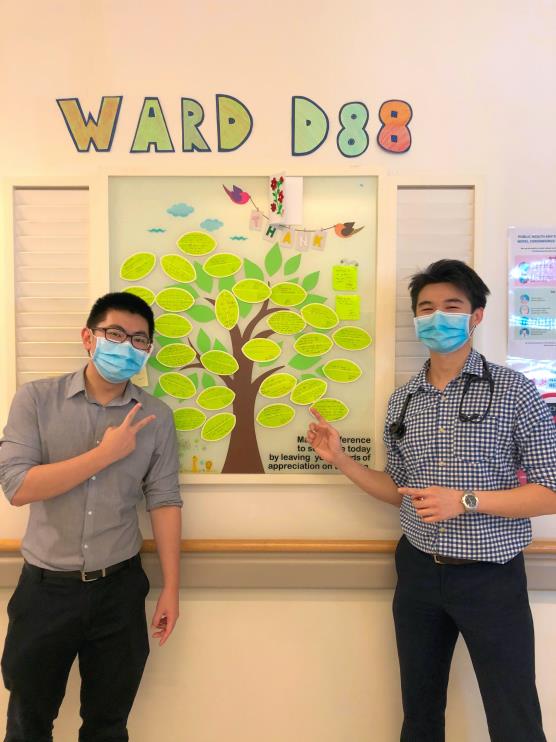 “During morning rounds, we juniors will present the patient and our plans to our Consultant. The Consultant will then adjust the plans according to their assessment of the patient and their many added years of clinical expertise,” said Jeremy.

Over in the Northern region of Singapore, Ashwin S/O Singaram began his Family Medicine rotation at Woodlands Polyclinic under the guidance of Family Physician-Consultant, Dr Richard Lee.

One of Ashwin’s most memorable encounters was attending to a middle-aged patient with chest pain and significant cardiovascular risk factors.

“Even though the patient appeared well, and his initial electrocardiogram (ECG) was normal, my tutor and I had a high index of suspicion that he could be suffering from a heart attack. Thus, we strongly advised him to seek further treatment, and he was referred to the Accident and Emergency Department immediately.” he added. 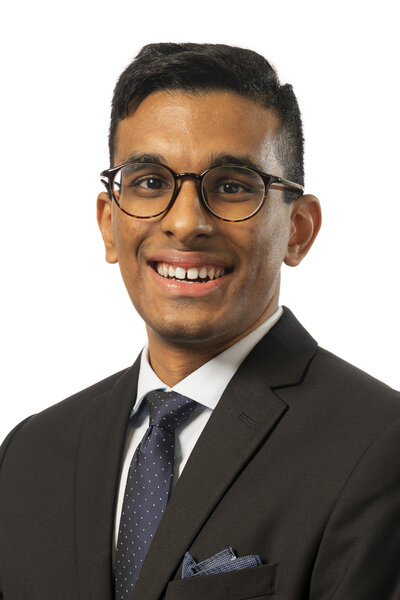 Ashwin was at Woodlands Polyclinic for his Family Medicine rotation

A week later, when Ashwin and his tutor followed-up with the patient, they learned that he suffered from a heart attack and had required an angioplasty.

“It was extremely fulfilling to know that I had positively impacted the patient’s life,” said Ashwin.

Starting out in the wards is no easy feat. As soon-to-be doctors, the students must be prepared under all circumstances in the clinical settings.

Nadia Nasuha Binte Mohammad Nazri who started her SAP posting at Tan Tock Seng Hospital’s General Surgery department, felt that it was initially challenging to adapt to the work environment. For instance, she had to learn the ropes fast and familiarise herself with the computer system. 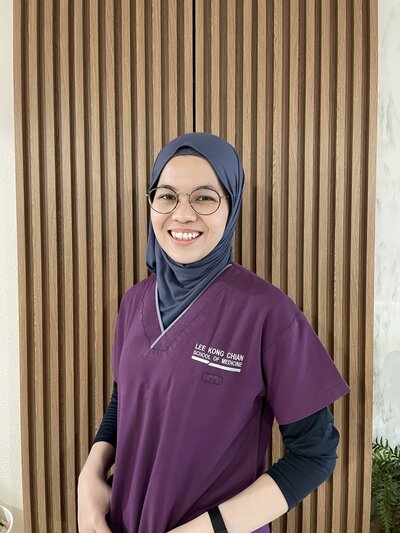 “Thanks to my kind and patient house officers who showed us how to navigate the wards and computer system, I managed to adapt and learn how to be functional so that I can assist the team in taking care of patients,” she added.

Completing medical education during a pandemic

Like their seniors, the 105 students from the Class of 2021 achieved a perfect score for their final MBBS written examinations and the Objective Structured Clinical Examinations. Their success is extra sweet, as they had to overcome challenges due to the COVID-19 pandemic.

From February to April 2020, clinical postings for this cohort had to be suspended and only resumed in May that year. This meant that with the safety and social restrictions implemented nationwide during that time, resulted in reduced learning opportunities for the students.

With case/patient loads at hospitals being lighter due to the postponement of elective procedures and restrictions on the movement of medical students, the Class of 2021 had to adapt quickly to changes in their clinical training. For instance, the trainings had to be conducted through various channels such as Google Classroom.

At the start of the SAP, Goh Xin Rong was at Hougang Polyclinic for her Family Medicine posting under the guidance of Family Physician-Associate Consultant, Dr Jeremy Koh.

She recounted that during one of her consultation sessions she met an elderly Chinese woman who only spoke Teochew dialect and was accompanied by her daughter, who spoke English.

“While I was able to speak basic Teochew, I still faced difficulties communicating with the patient effectively with my limited vocabulary especially in explaining the medical jargons. Despite the language barrier, I was constantly reminding myself to personally check in and connect with the patient instead of being too reliant on her daughter to seek her mother’s medical history and discuss her conditions,” said Xin Rong.

Recalling the experience, Xin Rong said she was appreciative of the communication training that LKCMedicine has provided in Year 2, which required students to simulate consultations with patients who had little shared languages.

She was also able to hone her communication skills by tapping on the Scholarly Project research experience in her fourth year, by exploring the nuances of triadic clinical communications with multiple language interplays. 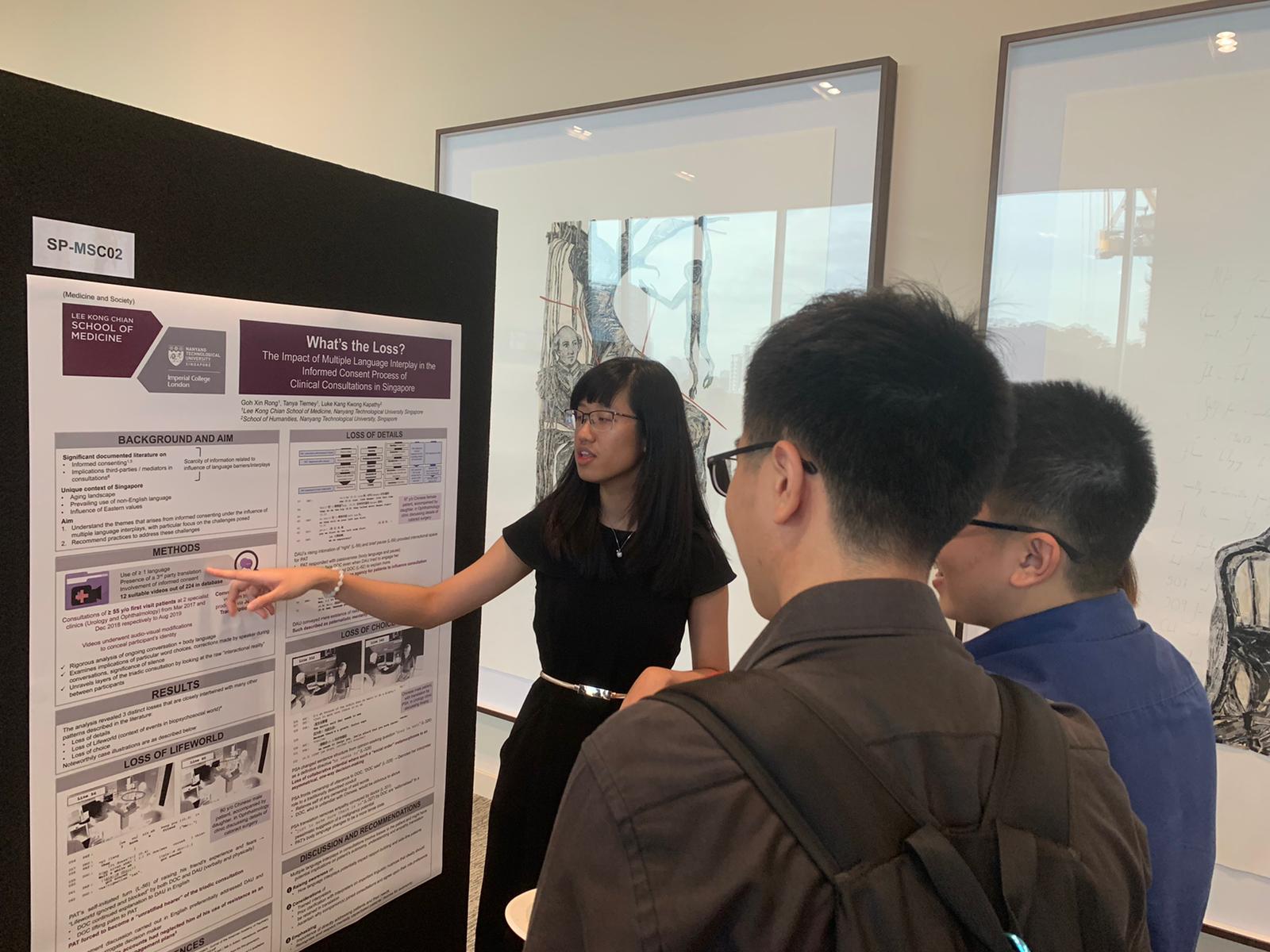 “The project taught me to be mindful of how subtle lexical choices and body language could very easily exclude patients from their very own clinical consultations, especially when there was a language barrier/accompanying family member in the room,” she added.

For Nadia, she felt that the practical skills she learned at LKCMedicine has helped her at her posting at TTSH. The skills include blood taking, inserting a urinary catheter, and performing an arterial blood gas.

“The ample practice that I have done on models in school gave me assurance before performing these procedures on actual patients,” said Nadia.

From students to soon-to-be doctors

Stepping into working world can be daunting for anyone. However, the Year 5 students shared that they have strong support from their co-workers who are always willing to help them.

In her posting at Sengkang General Hospital’s General Surgery department, Clara Lavanya Apollos said her team has been incredibly helpful in guiding her every step of the way.

For instance, they have taught her how to record what is happening during ward rounds and performing changes (discharging patients, making referrals, performing procedures).

“The learning curve is steep, but everyone in the team from the House Officers to the consultants have been supportive of us so far, and I am very appreciative of their encouragement,” said Clara.

Likewise, Zenneth is thankful for his team at KTPH, who have been encouraging and taught him well in the roles and responsibilities of a junior doctor.

“They have set high expectations of me yet have taken the time to guide me whenever I face difficulty. I believe that is the best way of learning as we are after all starting work soon, and it would be wise to aspire to match up to the workload and competence of a full PGY1 doctor!” he added.