Those who know and have worked with Professor Jennifer Cleland would agree that what sets her apart is her incredible motivation. This motivation has led Prof Cleland from studying the behaviour of rodents to improving medical education and practice through research. She has also drawn on it to develop several less well-known talents.

“From sommelier qualifications to long-distance cycling competitions, Jen can do anything she sets her mind to!” said Prof Cleland’s former PhD student Dr Kirsty Alexander. 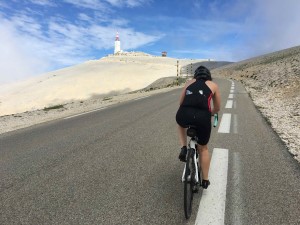 Prof Cleland brings the same determination and drive to her work as she does to her cycling. Here she’s on her way to conquer Mount Ventoux, also known as the Beast of Provence, one of the steepest climbs in cycling’s Tour de France

Now, she will bring this drive to a new role as she takes on the reins as Vice-Dean (Education) at LKCMedicine, a post she officially assumes on 1 September.
Following her mind’s desire 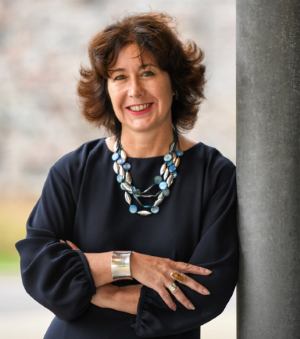 As an undergraduate in Scotland, Prof Cleland started her academic career studying monkeys, specifically the teenage flirtations of cotton-top tamarins. Enamoured with the experience, Prof Cleland applied to any openings to “watch monkeys in the wild” for her PhD.
“I got some nice letters back, but no jobs,” she said.

Being practical, she simultaneously applied to better-supported laboratory-based PhD programmes. Queen’s University in Belfast accepted her to study rodent behaviour. While she loved doing her PhD, what sparked her interest for a future career was occupational psychology. She taught the subject to fulfil the set number of teaching hours required of PhD students.
She so enjoyed it that she decided to pursue first a Master’s in Occupational Psychology, and later a Doctorate in Clinical Psychology. But psychology turned out to be a stepping stone on a longer journey.
When she was hired straight out of her second doctorate to split her time between clinical work and developing the communications course at the University of Aberdeen’s medical school, Prof Cleland, then aged 32, had found her calling.
“It was great. I finally found what I wanted to do,” she said.
Professor John Simpson, who was Vice-Dean for Education at the University of Aberdeen’s medical school, recalled his first impression of Prof Cleland.
“Jen impressed me right away because she was interested in the whole of the curriculum. [There was] somebody who was engaged enough in the process [of curriculum development] to be interested in, think about and comment on other bits of the programme, and not afraid to speak up,” he said.
It comes as no surprise that Prof Cleland quickly embraced more than the communications course. She started channelling her motivation into research that would influence medical education and practice more widely. Prof Cleland published Aberdeen’s first paper in the field, titled “Failing finals is often a surprise for the student but not the teacher” in 2005. She generated many more publications and attracted significant income before accepting the John Simpson Professorial Chair for Medical Education Research, the only such chair in the UK, in 2011. That appointment enabled her to spend 80 per cent of her time delving into medical education research while supervising as many as 13 PhD students. She also held a string of positions in national and international academic medical education bodies.
Her long-time collaborator and friend, Professor Peter Johnston also from the University of Aberdeen and a histopathologist by training, describes her as “one of the best completer-finishers” he’s worked with, using the Belbin Team Role term for a perfectionist who will often go the extra mile.
“She’s very good at rapidly analysing not only the nature of the question but the likelihood that people will be receptive to it,” he added.
Drawing on the full breadth of her background for her research, she has made a name for herself by combining the two strands of her career – occupational psychology and medical education research. Using this approach, she has been involved in work as diverse as widening access to medical school and examining the tensions between service and training in healthcare organisations.
“When you give people responsibility and autonomy, they generally step up to the mark. Otherwise, they are not happy in their work and in the medical field, patient safety becomes a concern,” said Prof Cleland.
And she walks the talk, said Prof Cleland’s former PhD student, Dr Alexander. “Jen was a fantastic supervisor, treating me like a respected colleague-in-training. She knows the worth of what she does and aims high – which makes her a great role model,” she said.
While opportunities continued to arise, it was family that kept Prof Cleland at Aberdeen, especially after the birth of her daughter in 2010. The paternal grandparents, who lived nearby, doted on the little girl. Any ambitions Prof Cleland and her husband, an anaesthetist, had to explore the world, were put on hold. When the grandparents passed on, the family faced a world of choices.

Being the more specialised half of the couple, Prof Cleland set about exploring opportunities in medical education research. She found opportunities in Singapore and elsewhere in the UK, but the adventure of a completely different way of living offered by Singapore won the family over. 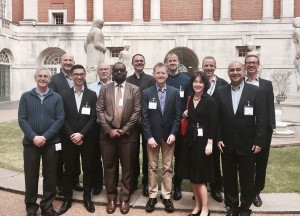 Prof Cleland with fellow executive committee members poses for a group photo after the inaugural meeting of the Society for Cost & Value in Health Professions Education in 2017, one of the many professional bodies she is involved in

Reflecting on Prof Cleland’s legacy on Scottish medical education research, Prof Johnston said, “She was a very positive influence and [has left us] stronger than we were before and many would readily acknowledge that Jen has been a very positive influence in their research career development.”
The Singapore chapter
In January 2020, she joined LKCMedicine first as Professor for Medical Education Research, helming the Medical Education Research & Scholarship Unit, before adding the role of Assistant Dean for Assessment to her purview. Less than eight months later, she’s been appointed to the role of Vice-Dean (Education).
“I am excited to step into the role of Vice-Dean for Education,” said Prof Cleland.
Building on the strong foundations laid by Professor Naomi Low-Beer, Prof Cleland hopes to use this opportunity to take stock. “LKCMedicine today is at a different point of organisational development and now is the time to reflect on the systems and processes,” she said.
Taking stock will ensure the School remains on track to be a leader in education and innovation.
“I also want to explore how we can further develop visible links between LKCMedicine and Imperial, particularly for the students, and engage more with colleagues from the National Healthcare Group (NHG) for education and research purposes,” she added.
She may have only just arrived on the little red dot, but to many in the medical education circle, hers is a familiar name.
NHG’s Group Chief Education Officer Associate Professor Nicholas Chew knew of her before meeting her while teaching the Leadership & Innovation in Health course at Monash University in Melbourne, alongside her. Recalling the experience, A/Prof Chew said, “She exuded a confidence in teaching that stemmed from competence and a wealth of practical experience few others had.”
“She put learners (and co-facilitators) at ease with the learning tasks at hand,” added A/Prof Chew, who is looking forward to working with her again.
LKCMedicine Lead for Educational Engagement Emmanuel Tan who has been working with Prof Cleland said, “She [has shown] to be someone who constantly provides opportunities for our professional and personal growth, listens actively and is open to new ideas. She has this special ability to bring out the best in people.”
As Prof Cleland takes on the helm for education, LKCMedicine MBBS programme is sure to rise to new heights.