Receiving an award that recognises a person's lifetime achievements surely says a lot about the recipient. But for Professor Pang Weng Sun, who received the Lee Foundation-NHG Lifetime Achievement Award from the National Healthcare Group (NHG) on 24 May, he modestly attributes it to the great support he has received from fellow colleagues for the past 30 years.

Prof Pang is the Vice-Dean of Clinical Affairs at the Lee Kong Chian School of Medicine. He concurrently holds the positions of Deputy Group Chief Executive Officer (Population Health) at NHG and the Executive Director of the Geriatric Education and Research Institute. 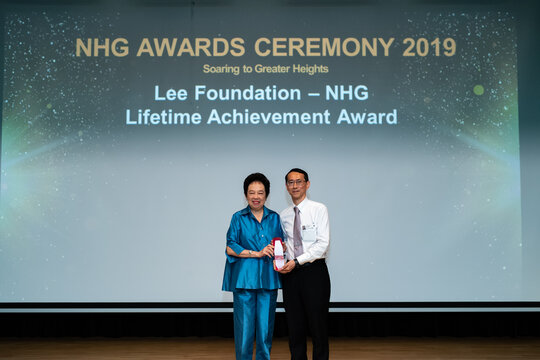 "I am grateful for NHG's kind recognition. I am sure there are several others deserving of the award for contributions in their respective fields. The achievements and progress that have been made in geriatric medicine and palliative medicine are not mine alone, but that of many colleagues over the years," said Prof Pang.

He recalled that in the 1980s, geriatric medicine was non-existent in Singapore. The need for this specialisation only came about after the Committee on the Problems of the Aged realised that Singapore's demographic pattern and life expectancy were changing profoundly.

To address the situation, Dr Francis Joseph Jayaratnam of Tan Tock Seng Hospital (TTSH) was tasked by the then-Minister for Health to set up geriatric medicine and build up geriatric care in the public health service. While Dr Jayaratnam conceived the plans, Prof Philip Choo, the current Group Chief Executive Officer of NHG, helped to draw up the proposals.

Prof Pang, together with a few other colleagues that included Dr Ee Chye Hua and Dr Chan Kin Ming, were tasked to help make these plans a reality. Over the years, the team not only helped to develop geriatric medicine departments and services in all the public hospitals but also worked with community services and other organisations to support elder care. Dr Jayaratnam also foresaw the need for hospital-based palliative care services and supported Prof Pang's additional training in palliative medicine.

"I am particularly grateful to many of my colleagues who have assisted me tremendously after I left TTSH. In fact, they were the ones who built up the services when I moved on. So this award is not about me but a recognition of my colleagues who came alongside and helped build up geriatric and palliative care," said Prof Pang.

He remembers well that Dr Angel Lee took over the palliative care service in TTSH after he left and how she went on to raise and nurture a team that eventually became a department. Prof Pang said, "Today, almost every geriatric medicine department has a geriatrician who is also trained in palliative medicine."

Prof Pang also credits Dr James Low for taking over the Geriatric Medicine department in Alexandra Hospital (AH) after he became the Chairman of the Medical Board, and how Dr Low built up both geriatric and palliative care in AH and thereafter, with its transition to Khoo Teck Puat Hospital.

When Prof Pang took on a new role as Vice-Dean of Clinical Affairs in LKCMedicine in 2011, Dr Kenneth Mak took over the reins as Chairman of the Medical Board and led the massive transition from AH to KTPH.

"I could do what I did only because of my colleagues who supported and eventually took over and did a better job," said Prof Pang, who is also involved in several committees at the national level, including the Society for Geriatric Medicine and the Chapter of Geriatricians, among others.

One of the most important lessons that Prof Pang has learned from his teachers is "caring for the patient and not about treating the disease". This has since become his philosophy when it comes to practising medicine.

"I had the privilege of working under senior physicians who demonstrated holistic care and compassion for patients. Just as they passed their philosophy to me, I need to make it a point to pass that on to my younger colleagues, so that they too will remember their calling and seek to be compassionate doctors," he said.

Another lesson he learned from his seniors is that being compassionate is not enough. A good doctor, he stresses, must also have sound medical knowledge and clinical skills. He or she must also have good communication skills to ask the right questions and think logically about how to find a solution to the patient's concerns.

After so many years as a doctor, Prof Pang still finds it gratifying to know he has done his best in treating his patients, both medically and emotionally. "I am heartened when I see patients and their families journey on well; even if the patient eventually passes away, and knowing their family members have peace of mind and being able to move on in their lives," he said.

When it comes to nurturing his juniors, Prof Pang feels it is a good job done when "my younger colleagues gain recognition themselves and move on to do a better job than me".

As a senior member of LKCMedicine, he hopes to instil the right values in its students.

"They all enter medical schools with their own dreams and aspirations. By the time they leave LKCMedicine, they should have the strong foundation to move on in their careers, not only academically, but also have the right heart for their patients and willingness to contribute to society and the public good. Hopefully, they would in turn become teachers of yet another generation. Someone taught me, I taught others, and this philosophy must be passed on," he said.