​When Executive Vice-Dean of Strategic Affairs and International Relations Professor Lionel Lee retired at the end of March 2019, the students, staff, and faculty both past and present gave him a rousing farewell and appreciation event. 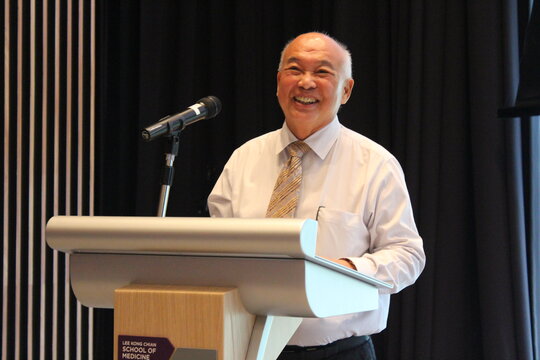 The opening tongue-in-cheek video with its Lionel-isms such as "seek forgiveness, not approval", "learn from the master", "I like to fire and forget", all delivered in Prof Lee's trademark roar tickled the audience, especially those who have had these phrases ring in their ears during the past eight years when they've worked closely with him.

During the course of the event, staff, faculty and students took to the stage at the Ong Tiong Tat & Irene Tan Liang Kheng Auditorium to show their appreciation in speech and song.

LKCMedicine Dean Professor James Best stepped up to the stage just as the video ended, saying "just for today, Lionel, you can be the master", and added that "we could not have a better guy in the Singapore system than Lionel".

Toh Kian Chui Distinguished Professor and Professor of Developmental Biology Phil Ingham FRS followed, describing how Prof Lee possessed the gentle art of persuasion coupled with a personality full of warmth, generosity and hospitality. He had worked closely with Prof Lee in setting up the PhD programme, which today has an enrolment of 63 students over seven intakes.

Following on was Professor Pang Weng Sun, Vice-Dean for Clinical Affairs, who called Prof Lee "a superb negotiator" who did a great job supervising the completion of the Experimental Medicine Building and the Clinical Sciences Building.

Chief Operating Officer Chan Wei Chuen shared the three most important lessons in leadership he learned from Prof Lee including being a "gardener-leader" who allows staff to grow and develop themselves.

"He can be loud but is extremely kind at heart and will help without intent, whether friends or strangers," he said.

Emotions got the better of him when it came time for Prof Lee to share his thoughts on retiring from the School. He said that it was not always plain sailing to build up the School and recalled at least three occasions when things were difficult enough to threaten the life and fabric of the School. "I hope to leave behind with each of you fond memories of the great times and the great adventures we had," he said.

He proceeded to perform with colleagues Professor Naomi Low-Beer on the piano, Professor George Chandy on the harmonica and Associate Professor Eric Yap on the violin. The group serenaded the audience with their rendition of Barbra Streisand's hit song "The Way We Were", whose lyrics, Prof Lee said, articulated what he really means.

LKCMedicine a cappella group MedLee then performed a medley of Disney hits such as "Fly Me to the Moon", "Gravity" and "If I Ain't Got You".

The event closed with Prof Best presenting a token of appreciation to Prof Lee – a pair of Peranakan porcelain teacups featuring a pair of fenghuang or phoenixes – wishing him the best for his retirement years.

What's next for the 68-year-old Prof Lee? "I hope to build a primary and secondary school in northern Chiang Mai," said the big-hearted man with the big voice.