When prominent historical figures in the field of nursing such as Florence Nightingale or Edith Cavel spoke of their vocation, they were often cited as viewing it early on as their "calling." Indeed, many professional nurses who have followed in their footsteps have always known that this was what they wanted to do, recognising their drive and passion at perhaps an early age. For some, however, their fervent love of nursing is something that is cultivated after embarking on their career.

If anyone asks LKCMedicine's Senior Assistant Director and Lead for Clinical Procedures, Ramani Saravanan, about what led her to first become a nurse, they will find she is the first to admit it was more out of necessity than desire.

"Sometimes, you are not given an opportunity to choose; the opportunity comes to you and you have to accept it," she said, adding, "I was not born with a silver spoon, but I managed to polish my rusty spoon to make it shine."

And shine she did. Early this month, she was one of three recipients of the inaugural Dean's Awards for Education, initiated this year to commend LKCMedicine's 10th anniversary. 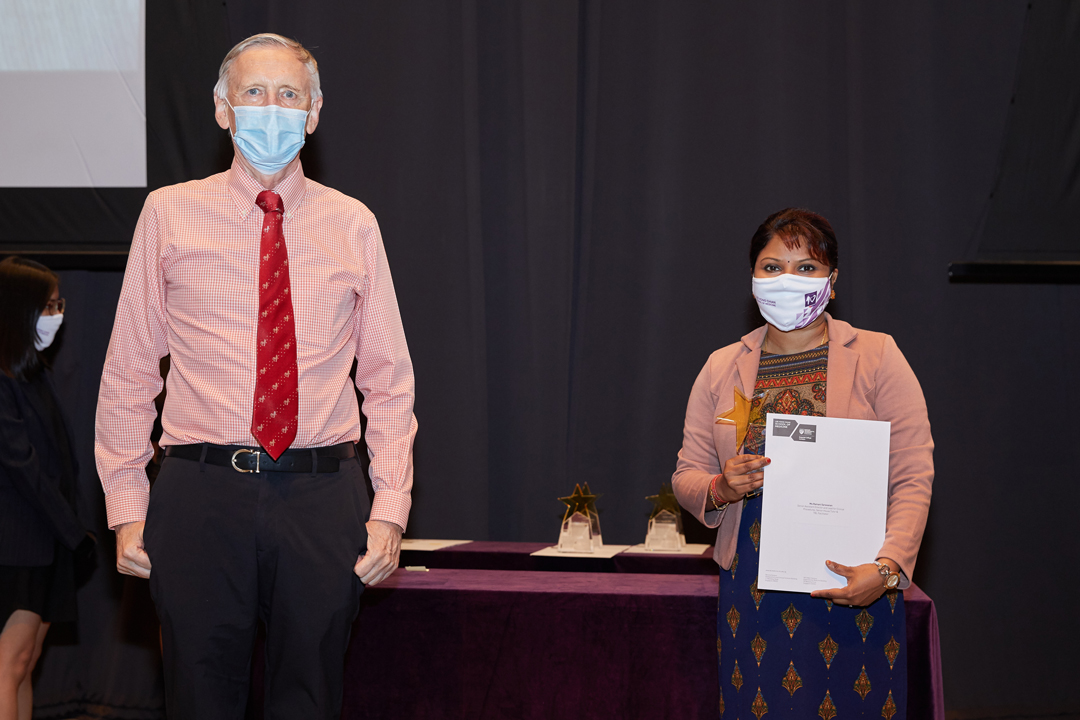 Ms Ramani is extremely grateful for the acknowledgement, saying it made all her past hardships worth it.

Growing up was not easy when Ramani was young. The eldest of three in a single parent family, she juggled her schoolwork with working in a school bookshop.

"My mum and I had to work day and night to make ends meet," she recounted, "and at times there were no lights and no electricity in the house."

Humbled by the opportunities the vocation had given her, she explained, "I'm very grateful to nursing because it suited me well and it meant that I could support my family. After I joined nursing, I started to appreciate my job. I would say that [it] taught me many values, such as righteousness, patience, autonomy, altruism and more."

As fulfilling as nursing turned out to be, it was her husband, a former lecturer at Singapore Polytechnic, who identified a natural talent as an educator in Ramani. Inspired by her husband's innovative and creative approaches in motivating students and fuelled by her own sense of satisfaction in passing on her knowledge and experience to student nurses as a clinical instructor, she joined Ngee Ann Polytechnic's teaching team for the immensely popular programme, Health Sciences (Nursing). Here, she became the module leader for Nursing Skills (Year 2.1) and Nursing Science (Year 3).

Hungry for more, Ramani then moved to Jurong Health Services (JHS) as Nurse Educator, where she left somewhat of a legacy.

"I was the first Nurse Educator to join the hospital," she explained. "As a NE, my primary responsibilities were to plan, organise, coordinate, evaluate and implement new training activities to close learning gaps identified by nursing staff, and I was very proud to leave my own personal mark on the organisation."

It was after her time at JHS that her LKCMedicine journey began. Much as the fire in her belly was lit in seeing her student nurses succeed, since joining the School in 2012, Ramani feels her greatest sense of pride has been in nurturing her students as they transition into the field. 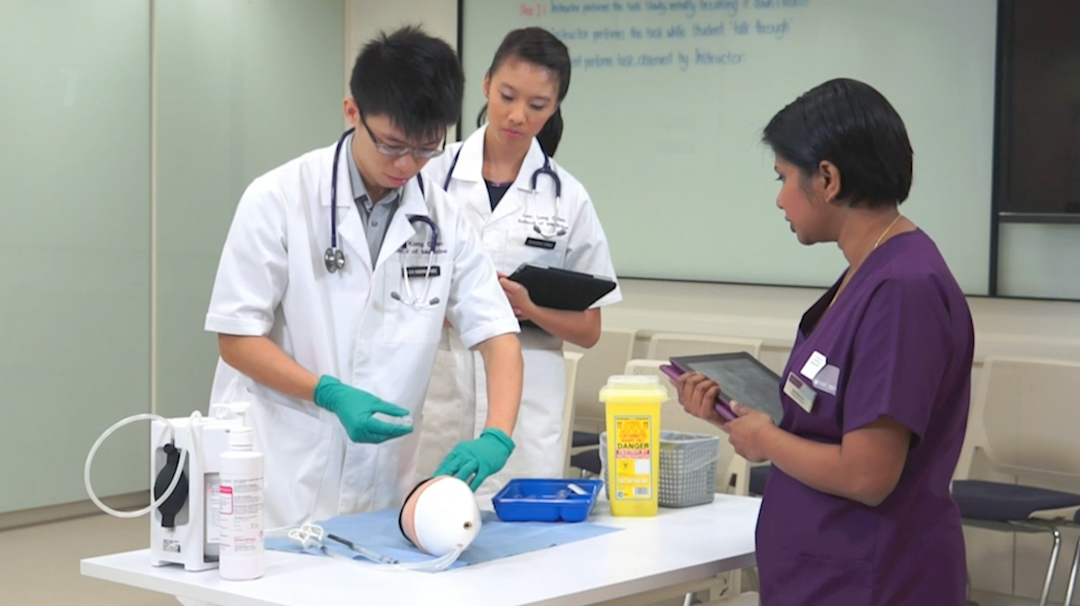 "I must say that my proudest moments at LKCMedicine are when my students become doctors and, in the hospital, they come to me and say, "Sister Ramani, do you remember me?" That really touches my heart," she said.

The warmth and generosity of spirit that Ramani imparts to both her current and former students is clearly reciprocated. Laughing as she recalled the 2013 trailblazing cohort graduating, she continued, "On the day their academic results were out, they actually threw me into the air! I felt on top of the world. I really miss them."

While Ramani's drive is firmly ensconced in education, she remains true to her roots, and in early 2020, she signed up to volunteer for the Singapore Health Corps. However, Covid-19 changed the course of where her expertise was needed, and she remained at the School to prepare her students for the front line.

She said, "As a healthcare professional, when the [School] needed my expertise the most, I could not turn my back on it." 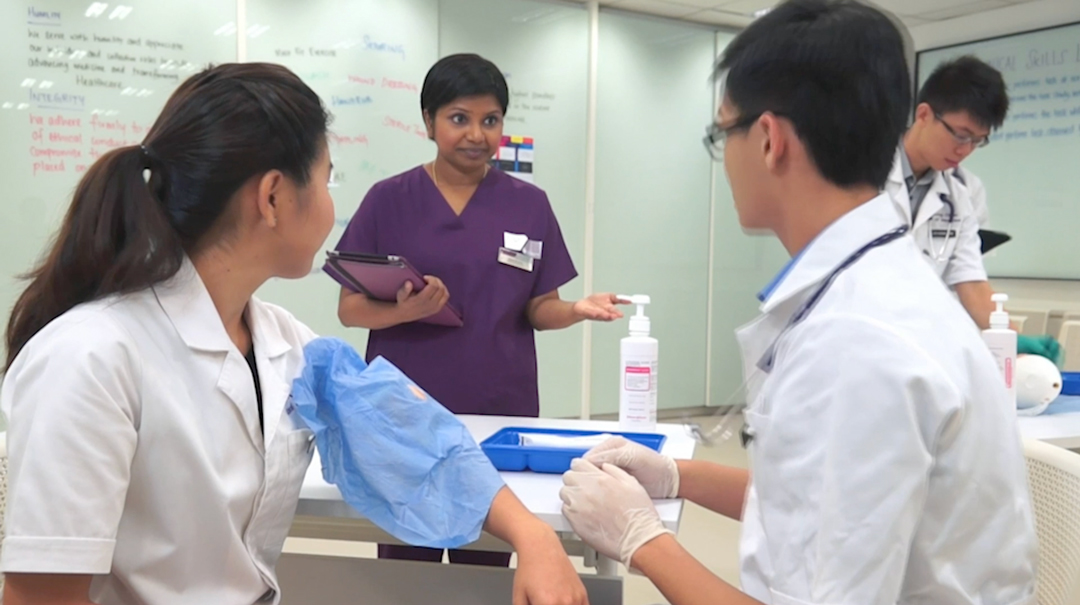 Over the course of this period, she has been involved in the training of the School's rising penultimate year students in infection control practices, the donning and removal of personal protective equipment and swab collection to support the nation's efforts in the fight against the pandemic. In one way or another, nurse or educator, she has served the cause.

In many ways, nursing and teaching are sister vocations. It takes the same level of education to enter the profession, as well as continuing education to remain current in the field. However, as far as personal traits are concerned, it takes a special passion, love of people, patience and dedication to succeed.