So impressive is their respective research in cholesterol and the human kidney that Nanyang Assistant Professors Yasunori Saheki and Xia Yun are among nine selected from around the world to join a prestigious programme for young leaders in science – the European Molecular Biology Organisation (EMBO) Global Investigator Network. Asst Prof Xia is the only female awardee this year. 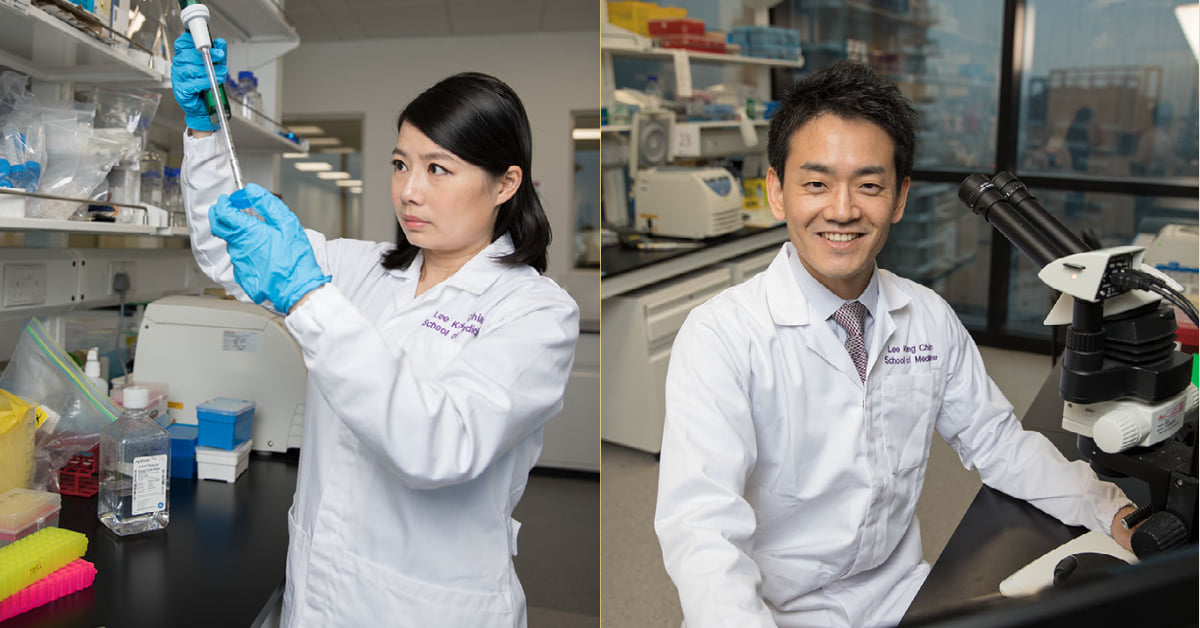 For his study that looks closely at how cholesterol is transported and distributed inside cells, Asst Prof Saheki now joins the second cohort of the EMBO Global Investigator Network. The Lee Kong Chian School of Medicine (LKCMedicine) Principal Investigator (PI) will start the four-year tenure in January 2021.

What makes Asst Prof Saheki's research an important one is its impact on our understanding of neurological disorders like Alzheimer's and Parkinson's diseases. For the brain to function properly, there must be a well-balanced cholesterol level in the plasma membranes that wrap around neurons and other cells in the human body. These plasma membranes, made up mostly of fatty molecules known as lipids, protect the brain's neurons from the external environment and keep them functioning well. Cholesterol is a major type of lipid, and any cholesterol imbalance would result in the membrane becoming too hard or too soft, reducing the neuron's ability to function and communicate properly with other neurons. This compromised ability has been observed in various neurodegenerative conditions.

"Improper distribution of cholesterol in neurons has been linked to many brain diseases," said Asst Prof Saheki. "If we can understand the fundamental basis of cholesterol transport and its impact on neuronal functions, we will be able to more efficiently diagnose and treat neurodegenerative disorders like Alzheimer's and Parkinson's diseases." By being able to correct the plasma membrane's cholesterol levels, Asst Prof Saheki believes that this will pave the way for a new therapeutic approach to treating neurodegenerative disorders.

According to the National Kidney Foundation, Singapore has one of the highest incidences of kidney failure in the world, with one new case diagnosed every five hours. Given Singapore's ageing population and the rising prevalence of diabetes and obesity, the number of people suffering from kidney failure in Singapore is expected to increase. And so it is here that Asst Prof Xia's research study shines.

Dedicating her days in the lab to growing miniature kidneys (known as kidney organoids), Asst Prof Xia is closing in on being able to create these mini organs that could present some key features of the actual human kidneys in living bodies. Such advancement is key to unlocking the potential of personalised treatments for people with kidney disease as it would allow scientists to better understand how the disease worsens in an individual patient.

"A patient's genetic make-up is closely intertwined with how their kidney disease will develop, as the type of mutation within the disease-causing gene can differ from patient to patient," said Asst Prof Xia, a PI in Stem Cell Lineage Specification and Organ Regeneration at LKCMedicine. She believes that these organoids will allow them to find out which drug treatments will be most effective for specific patients in a faster, more affordable, less invasive way, and with a higher rate of success.

Like Asst Prof Saheki, Asst Prof Xia joins the second cohort of the EMBO Global Investigator Network and will begin her four-year tenure in January 2021.

Benefits of the EMBO Programme

Both Asst Profs Saheki and Xia have similar plans for how they would like to maximise the benefits of being an EMBO Global Investigator. They intend to use this prestigious network to reach out to the European scientific community and other EMBO member countries (namely India, Chile, and Taiwan) for more opportunities to collaborate on research projects. They appreciate the support from EMBO in fostering communication between scientists across regions, as well as the additional support in promoting various activities of their own laboratories and getting papers published in EMBO press journals.

Asst Prof Saheki said, "I am honoured and thrilled to join the EMBO Global Investigator Network. It is thanks to the hard work of my former and current lab members, as well as the supportive environment of LKCMedicine". Addressing the other young scientists in LKCMedicine, Asst Prof Saheki said, "If there is an opportunity for you to apply to be an EMBO Global Investigator, you should grab it."

When congratulated on her selection to the EMBO Global Investigator Network, Asst Prof Xia shared her joy. "I was really happy," she said. "This year has been a very tough year and so this is a good conclusion to 2020."

Like Asst Prof Saheki, would she too, encourage other LKCMedicine scientists to apply to join the EMBO Global Investigator Network? "Yes, I would say you should. But always remember that science comes first. Don't focus on the awards. Focus on the science. Compete with other first-tier scientists," she advised. "Compare yourself to what you were three years ago, and then picture yourself three to five years from now. Always work towards making yourself better."