In the last year, LKCMedicine's early-career female faculty has been hitting it out of the ballpark in the research stakes, earning them well-deserved accolades, awards, and grants. We find out more about their work.

Growing up, LKCMedicine Associate Professor of Molecular Medicine Wang Xiaomeng has been fascinated by nature. Her parents showed her the world of wildlife and guided her with scientific books. However, another area of science caught her attention when she was older: biology.

"When I started to learn biology systematically, I knew there was nothing more intriguing than finding out how things work and do not work in our body. The idea of discovering something new that could be translated into new treatment of diagnostic strategies is fulfilling. That's why I decided to work in research," said A/Prof Wang, who is now an established scientist and part of LKCMedicine's growing pool of early-career female faculty.

Concurring, A/Prof Wang said, "I certainly see more women entering the research field, although it is still not comparable to males. Perhaps modern women are more confident and independent. They now have the freedom to decide what they would like to pursue for their career without being much affected by social and gender stereotypes."

A/Prof Wang, who became a tenured Associate Professor in March this year, said, "The ultimate goal is to identify biomarkers that could predict disease progression or treatment efficacy and develop novel treatment for these diseases."

For her research, she was awarded five grants (totalling about $5.3 million) including the Ministry of Education (MOE) Academic Research Funding (AcRF) Tier 1.

"These grants support manpower and other experimental costs in my lab. They also provide a platform for information, technology and knowledge exchange between different research institutions," said A/Prof Wang.

Women scientists on the international stage

From clinching prestigious titles and prominent grants, Nanyang Assistant Professor Christine Cheung is no doubt a renowned scientist in the international scientific community.

Asst Prof Cheung, who researches at the Laboratory of Molecular and Vascular Medicine at LKCMedicine, was the only woman named as Honouree of Medical Innovation at the Junior Chamber International Ten Outstanding Young Persons Singapore Award show in 2018. She was also awarded the L'Oréal Singapore Science National Fellowship that year.

In March this year, she won the prestigious Human Frontier Science Program (HFSP) Young Investigator Grant to study how the human brain's structure is assembled during the embryonic stage and the role that blood vessels play in that process. In the same month, Asst Prof Cheung was also conferred the NTU Provost's Chair in Medicine.

Currently, her research aims to study why certain people are genetically predisposed to vascular diseases.

"We pioneer novel methods of converting human stem cells into blood vessel cells, including those found in the heart or brain. These personalised blood vessel models have enabled us to investigate how the underlying biology is perturbed in individual patients. We are finding means to restore blood vessel health before adverse outcomes of diseases occur with the goal of working towards preventive medicine," said Asst Prof Cheung.

As experts in their own area of research, these women faculty have contributed greatly to science. Take LKCMedicine Nanyang Assistant Professor Xia Yun, for example.

In August this year, she led a team of LKCMedicine researchers – including Assistant Professor Foo Jia Nee – to grow 'mini kidneys'. The research garnered attention not only locally, but also across the world.

These miniature versions of a human kidney – measuring one millimetre to two millimetres wide – are used at NTU to test how effective some drugs can be in curing polycystic kidney disease, which causes cysts to form on a kidney. 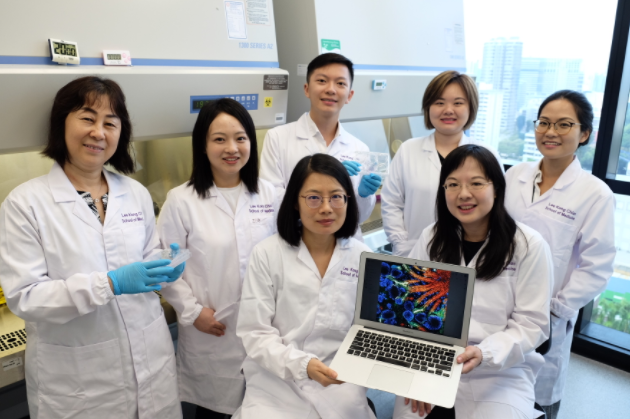 "We believe that this approach can be extended to study many other types of kidney disease, such as diabetic nephropathy," said Asst Prof Xia, who works on stem cell in vitro lineage specification with a special focus on generating kidney-related cells.

"We are interested in coaxing human pluripotent stem cells into three-dimensional mini-organs, for example mini-kidneys, which can be utilised for studying human diseases. Comparing with traditional tissue culture and genetic animal models, such stem cell-based model platforms offer unprecedented opportunities to recapitulate human disease with high accuracy and fidelity," she added.

"These two grants will not only allow us to explore some novel aspects of our current kidney organoid model system, but also provide us with the possibility to collaborate with other research teams to increase the dimensionality of our study," she added.

"We have identified heritable DNA variants that influence risk to Parkinson's disease in Asians and have shown that there are important differences between Asian and European genetic risk. We are now keen to apply this knowledge to early risk protection and monitoring of local patients, and also to understand disease biology," said Asst Prof Foo.

Creating an impact on research

The achievements attained by LKCMedicine early career faculty are a source of pride not only to the School, but also Dean of LKCMedicine Professor James Best. It was one of his goals to make LKCMedicine's research prowess known when he became the Dean in 2014.

"We wanted to develop a strong research programme, building on the clinical capabilities of our major healthcare partner, National Healthcare Group (NHG). We saw potential in working with NHG to develop clinician-scientists and in joint research projects. We also wanted to link our research programme closely with Imperial College London and with NTU. There has been a strong emphasis also on recruiting outstanding early career faculty and creating a cohesive team across research areas within LKCMedicine. I am very pleased with our progress towards all of these goals," he added.

Attracting the brightest minds to LKCMedicine

As a young and innovative medical school with a vision to redefine medicine and transform healthcare, LKCMedicine aims for the best in research and education.

Fundamental to the School's research strategy is an emphasis on Ageing and Population Health, underpinned by LKCMedicine's growing expertise in these key areas: Metabolic Disorders, Neuroscience and Mental Health, Infection and Immunity, Dermatology and Skin Biology, Developmental Biology and Regenerative Medicine as well as clinical and other disciplinary research.

These areas directly address Singapore's future healthcare challenges and caring for its rapidly ageing population. To excel in these research areas, the School looks at building synergies with stakeholders such as NTU, Imperial College London, the Agency for Science Technology and Research (A*STAR) and the National Healthcare Group.

To attract exceptional young academics throughout the world, NTU launched the Nanyang Assistant Professor Scheme (NAPs) in 2007. In LKCMedicine, there are currently 13 NAPs under the scheme, eight of them female.

There is also the National Research Fellowship scheme (NRF) which, in recent years, resulted in the appointment of brilliant early career scientists in the School at the level of Assistant Professor (tenure-track). In most years, one or two researchers are appointed through these schemes which are processed by the University for NAPs and by the National Research Foundation for NRFs.

The School has the opportunity to examine the applicants' records of achievement and their CVs, their fit in the School considering the research strategies and areas that need strengthening, and upon shortlisting, will involve faculty in their research seminars, interviews prior to final interviews, ranking and final recommendation to the University.

Yet another young female scientist with great potential is Assistant Professor Anna Barron. Her early career research has been recognised by a number of prestigious awards, including the 2008 Women in Endocrinology Young Investigators Award, 2009 American-Australian Neurological Fellowship, 2010 Invitational Postdoctoral Fellowship from the Japan Society for the Promotion for Science, and the 2014 Alzheimer's Association Imaging Consortium Fellowship. In 2016, Asst Prof Baron received the elite Nanyang Assistant Professorship Award.

Asst Prof Barron who works at LKCMedicine as a Principal Investigator of Neurobiology of Ageing and Disease, is studying the cellular and molecular mechanisms of normal and pathological brain ageing.

In September this year, it was announced by NTU President and Distinguished Professor Subra Suresh at his second State of the University Address that Prof Augustine is part of the Neuroscience Task Force that has developed the newly launched campus-wide Neuroscience PhD programme. The programme includes faculty from across NTU.

LKCMedicine's new Vice-Dean of Research Professor Lim Kah Leong added, "I feel that a talent is a talent, and we should be colour- and gender-blind in talent recruitment. However, the reality is that female scientists everywhere face a lot of unconscious gender bias. Given this, I now realise that being gender-neutral may not be good enough. Indeed, we have to take a more proactive role to bridge the gender divide. I am very happy to note that the leadership at LKCMedicine is very supportive of women in science, and I look forward to work with them to further promote equal opportunities for our female colleagues."