On 6 June, the annual LKCMedicine Dinner and Dance event for all students and faculty members took place at Chijmes Hall. Themed "Crazy Rich Asians", the night featured games, musical entertainment, a magic act and a photobooth to captivate the audience.

This event has traditionally been held before the beginning of the succeeding academic year, with mostly Year 1 students attending the event. This year's event was shifted to the end of the academic year as a celebration of students' achievements for the entire academic year.

The change is well received, with everyone attending in good spirits, as evidenced by their enthusiastic participation in the games.

The event was fittingly held at Chijmes Hall, in line with the theme of the night, with its glamorous and redecorated former church hall. Fairy lights and candles were placed around the venue to achieve the ambience that we desired for the event.

With the setting done, the event began with speeches by MedSoc President Gabriel Tan and Vice-Dean for Education Professor Naomi Low-Beer.

They were followed by three games titled "Who am I?", "Minute to Win it" and "Kahoot". The games were punctuated by three rounds of lucky draw and three performances from talented performers from the Class of 2023.

The games, performances and lucky draw were met with rapturous response from the enthusiastic audience.

Another popular feature at the Dinner and Dance was the photobooth and a printing booth where photographs tagged #lckmeddnd2019 on Instagram were printed. Throughout the event, students and faculty members alike flocked to the booth to create photo mementoes for the event. 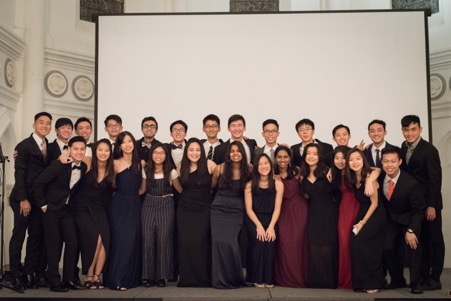