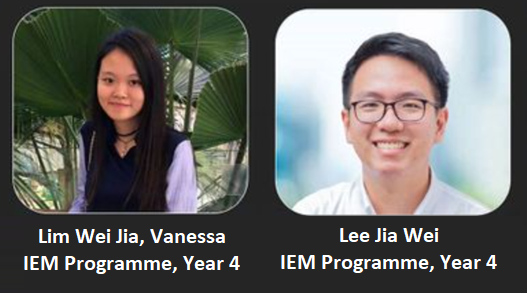 The students worked closely with Dr Wesley who is a senior lecturer at EEE and the EEE Programme co-ordinator. He told the students about Microsoft Imagine Cup and that it is possible to participate in the competition with their Final Year Project (FYP). The students felt that it will be a great opportunity for them to join the competition as they would be exposed to more opportunities, and they will also be able to learn a lot from competing with other teams all around the globe and push themselves to come up with the best idea that they could have. They signed up for the optional Epic Challenge as they felt that it could help them to have a good gauge of their FYP idea in the competition on a global scale. Furthermore, they also wanted to gain judges' feedback in order to do better for the official rounds of the competition.

They elaborated that “Our idea is a web-based game application that uses Flow-Based Programming to teach programming concepts to children aged 10-14 years old. We plan to teach skills that are not mainly taught in current applications such as efficient coding and collaboration.”

Dr Wesley has helped them a lot by guiding them through this competition and helping them to connect with the past winners to learn more about the competition. The students also approached some professors in National Institute of Education (NIE) as well as Accessible Education Unit (AEU) for their previous ideas to seek feedback from them.

The students faced immense competition. There were hundreds of teams from across the globe that have submitted their proposals to the Epic Challenge. They were particularly  impressed by one team called MakeaBLE from Taiwan. The team’s education based idea allowed AI-enabled IoT sensor gadget to help students create prototypes of their AI-IoT ideas.

There were two other winning teams. One was a team named KAPI (from the United States), whose idea is a keyboardless, ASL-inspired Programming Interface (KAPI), which leverages emerging low-code platforms (PyCaret, Github Co-Pilot) computer vision, and Machine Learning, so that people can sign their code using only a webcam. The other team was Roz Development Team (from Pakistan) who idea was a mobile application to assist in early detection of breast cancer.

The student feel gratitude to the knowledge they learned in IEM. They said “IEM has equipped us with programming and designing skills which helped us greatly in developing our idea. The Design and Innovation Project (DIP) and Introduction To Design & Project (IDP) modules were especially helpful when it comes to ideation and report writing.”

While the competition is still on-going, the Epic Challenge is the first challenge of the competition, but it is also an optional challenge. For this challenge, the students have won in the Asia Region with their solution and are excited by the prospects of their FYP becoming a reality.