19 March 2022 marked another milestone for the Lee Kong Chian School of Medicine (LKCMedicine). The young medical school launched its first ever named lecture, the  James Best Distinguished Lecture, which forms part of the LKCMedicine 10th Anniversary (2020) Distinguished Visitor Programme, funded by a $500,000 gift by an anonymous donor. Under this programme, two Distinguished Visitors will be nominated each year to interact, network, and share their expertise with the NTU and LKCMedicine faculty, students, and the wider community, including delivering a public lecture.
Held as a hybrid event, last night’s lecture attracted some 200 registrants from the School and its partner institutions in Singapore, the region and Europe. About 80 attended on-site at the School's Ong Tiong Tat and Irene Tan Liang Kheng Auditorium, under relaxed COVID-19 safe management measures which took effect this week.
Professor James Best is the first speaker of the series, as a nod to his invaluable contributions as LKCMedicine’s first resident Dean – an appointment made back in 2014. Prof Best retired last year, and is now a Visiting Professor. His lecture was titled “Preserving the art and furthering the science of medicine”.
The donor, who wishes to remain anonymous, made the gift as he was impressed with the immense progress LKCMedicine has made in its first decade under former dean Prof Best’s leadership. He hopes his donation will turn into a gift of knowledge for the NTU community, supporting the medical school’s mission to transform medical education and advance healthcare research in Singapore. With matching by the Singapore government, the total gift is S$1 million.

Said the donor, “Being such a young medical school, LKCMedicine has impressed me with its achievements over the past decade. My personal interactions with its then-Dean Prof James Best over the years served to reinforce this, and that is why I decided to make this gift in its 10th anniversary year. I am hopeful that the gift will bring to LKCMedicine world-renowned medical luminaries who will not only enrich the research environment of the School, but also inspire both faculty and students towards reaching for ever greater heights of achievement.” LKCMedicine Dean Distinguished University Professor Joseph Sung, who is also NTU Singapore’s Senior Vice-President for Health & Life Sciences, then delivered the opening address. He said, “Today, we celebrate another first for LKCMedicine – our first named lecture, the James Best Distinguished Lecture. To be held twice a year, the series feature eminent professors who are global leaders in their respective fields. Through this platform, the School will play a vital role in bringing together thought leaders and industry experts to address thought-provoking issues in medicine, with the perspective of fostering dialogue and advancing discourse in the transformation of medicine, medical education, and research.” 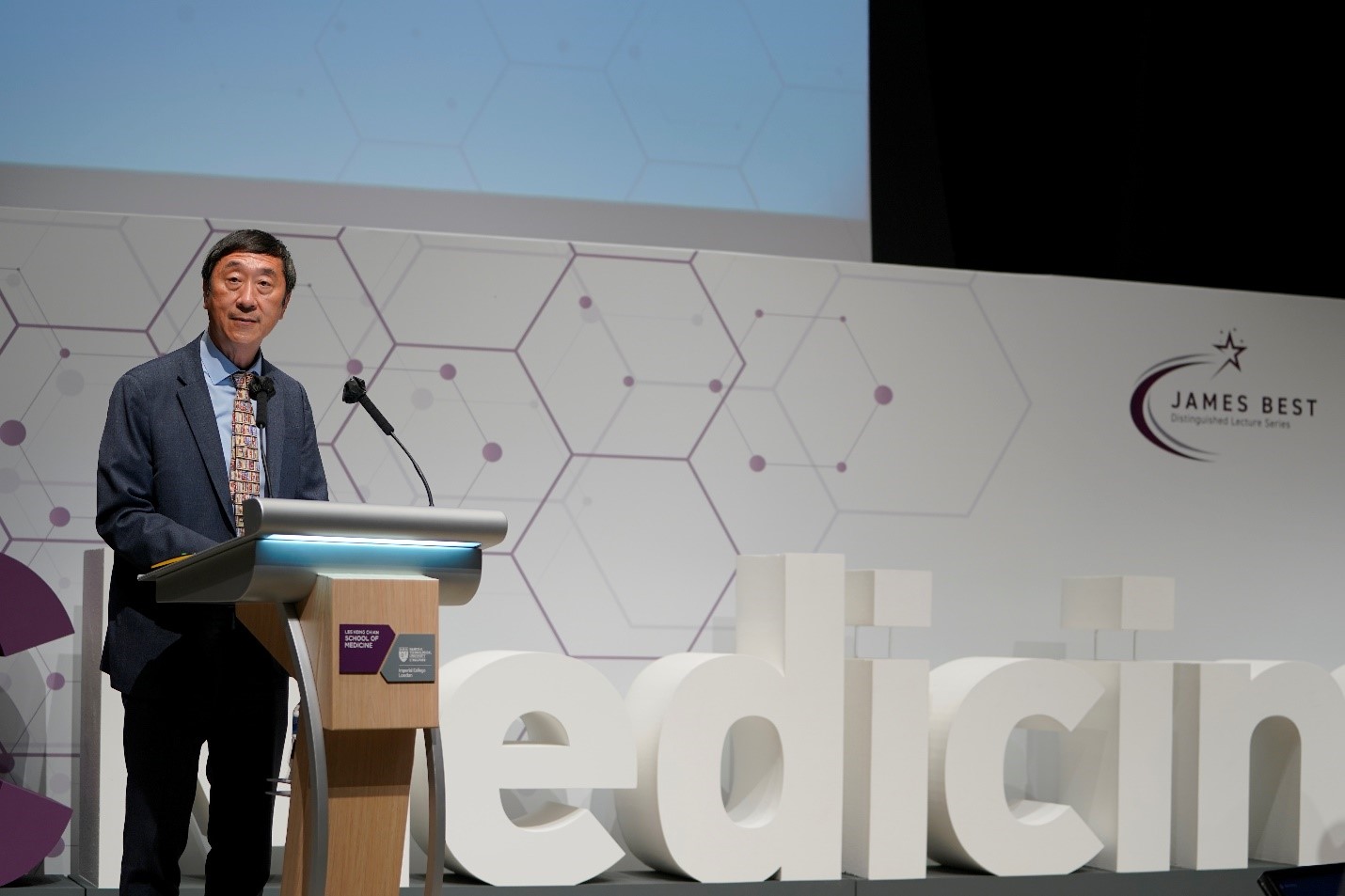 Next, NTU President Distinguished University Professor Subra Suresh welcomed the audience with a heartwarming message, pre-recorded as he is away on a work trip to the US.

Acknowledging the generous donor, he said, “The university is grateful for his contribution and the strong belief in this initiative and its potentially immense impact. His gift makes it possible for NTU and LKCMedicine community to engage with renowned experts who are eminent leaders and movers in their fields.” Then came the highlight of the event, the lecture by Prof Best.

“This evening, I want to explore the nature of medical schools at this stage of their evolution and their role in determining the future of medicine as the fourth industrial revolution plays out through the merging of the physical, digital and biological worlds. As well as my own experience over the past 14 years, I have interacted with many other medical schools. I will draw on those interactions and other observations. I do not believe these fundamental roles are likely to change in the foreseeable future. Although the tools are at our disposal, the nature of the medical practice will undoubtedly progress dramatically in this era of extraordinary technological advances.” 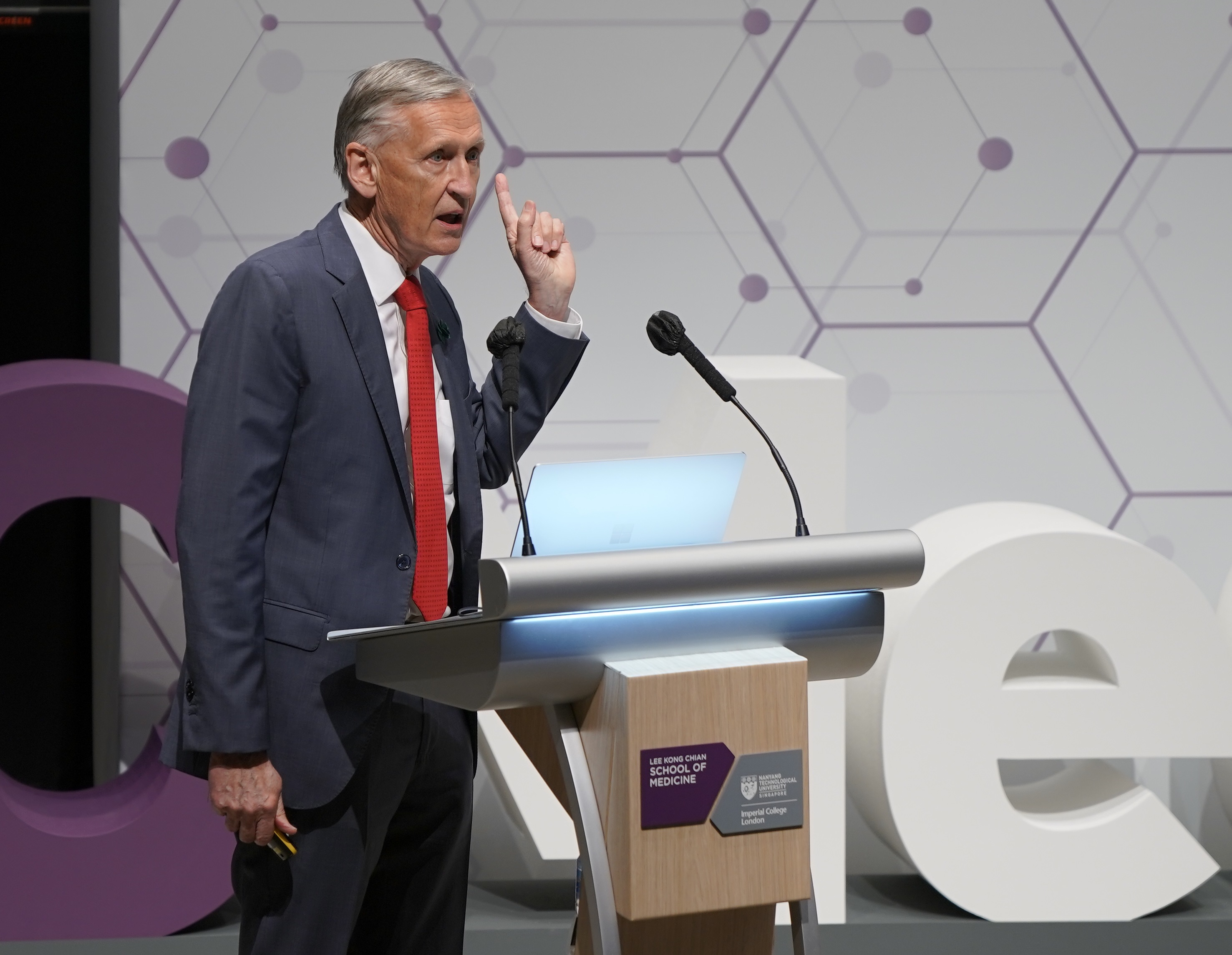 A Question & Answer session then followed, chaired by Professor Lim Kah Leong, LKCMedicine Vice-Dean for Research and President’s Chair in Translational Neuroscience. It was a lively session that slightly overran due to the many questions coming from the floor and via Zoom.

In opening the session, Prof Lim said, “I believe you will all agree that we have just had the best lecture of our life and it’s on a very important topic. It’s also a timely reminder for doctors to treat the patient, not just the disease – that is the science; but also the person – that is the art.” 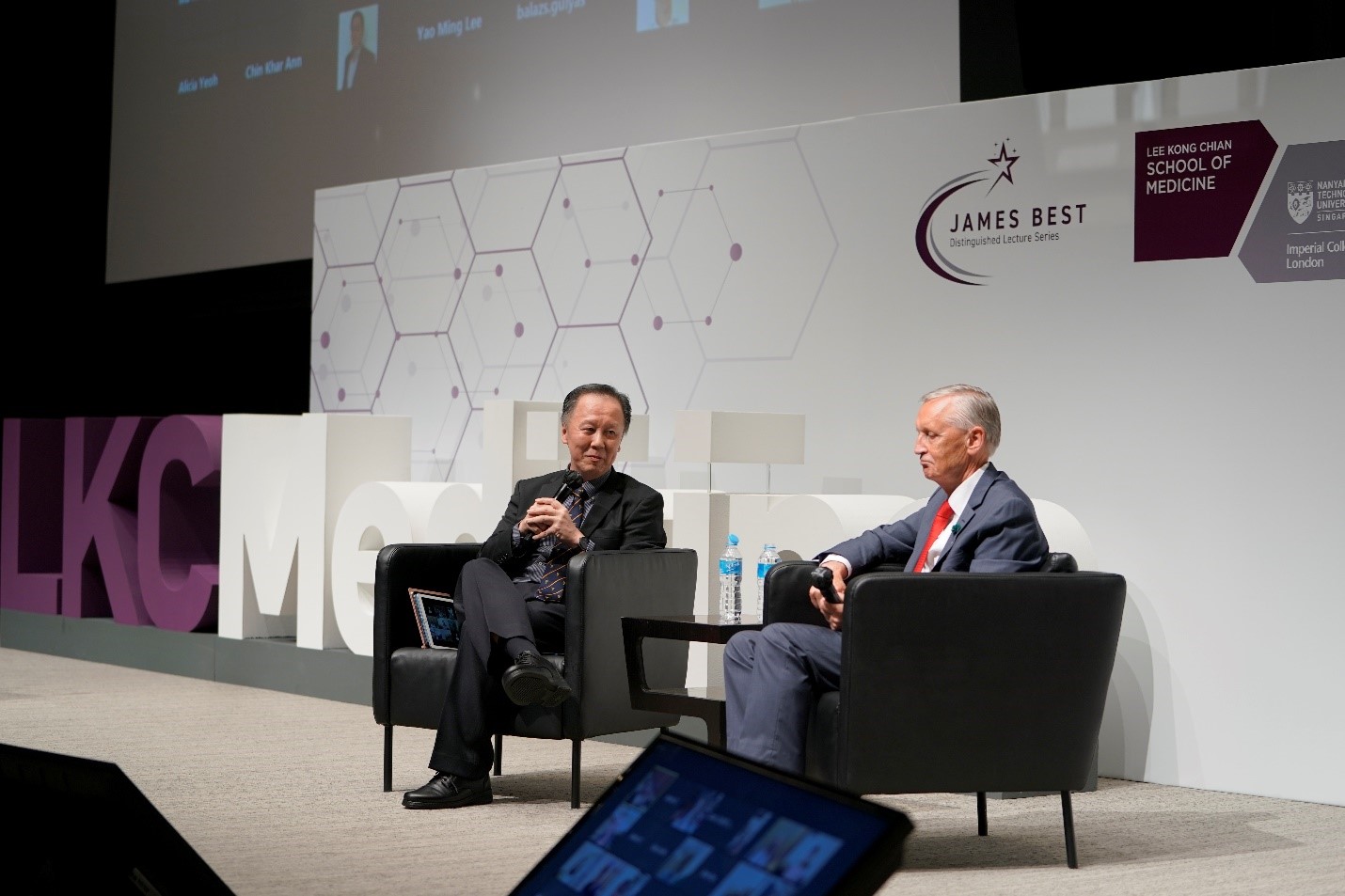 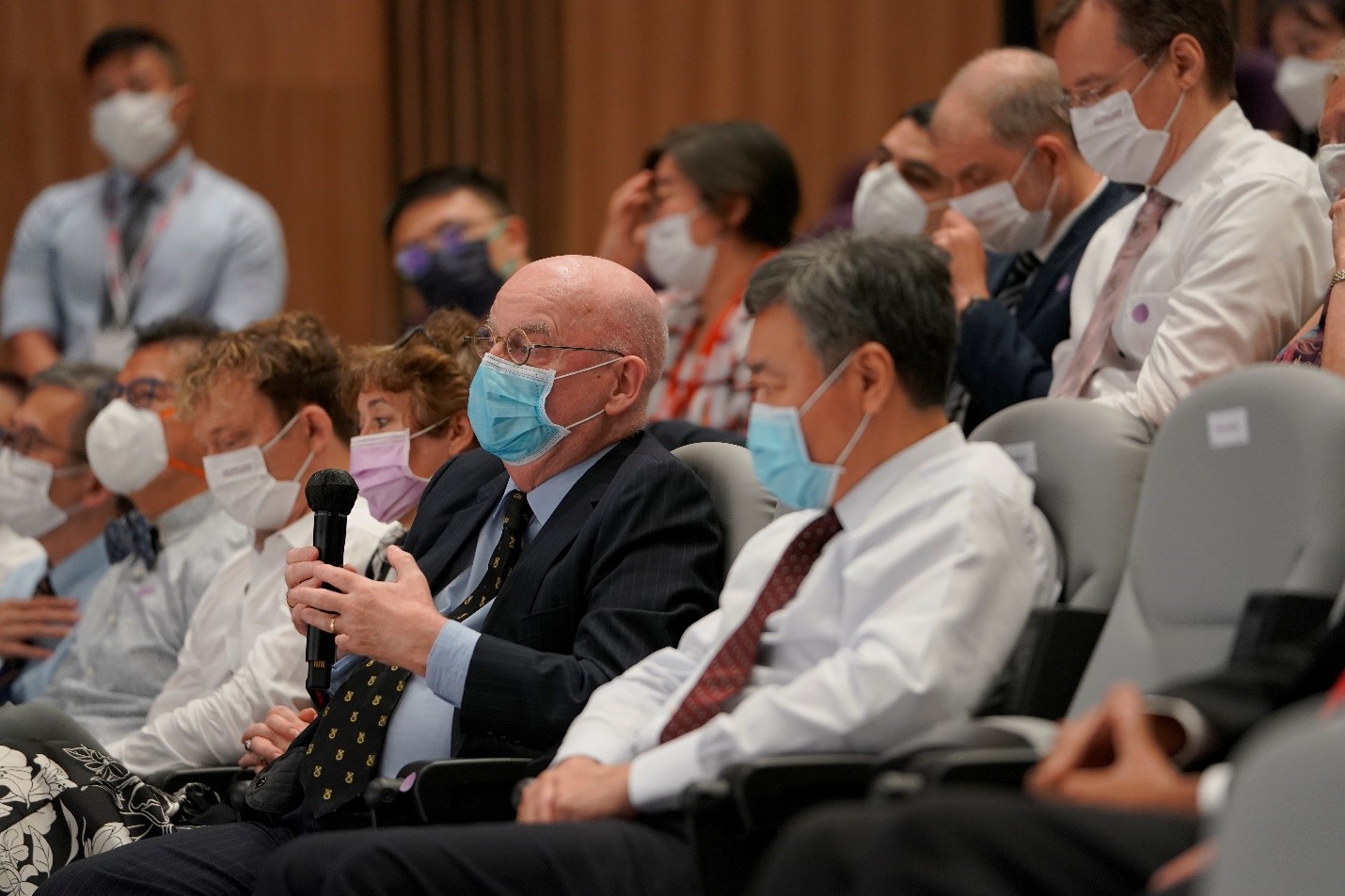 A lively Q & A segment: several questions came from the floor and via Zoom

Right after the Q & A segment, it was announced that the next speaker of the James Best Distinguished Lecture Series will be Nobel Laureate Professor Barry Marshall, who has accepted the invitation to speak at LKCMedicine later this year. Professor Marshall is an Australian physician and recipient of the Nobel Prize in Physiology or Medicine. He is also Professor of Clinical Microbiology and Co-Director of the Marshall Centre at the University of Western Australia.

Joining us virtually from Perth, Prof Marshall said, “The concept of NTU bringing together young doctors with scientists and engineers and mixing them both, is really what makes for a more interesting academic experience.” 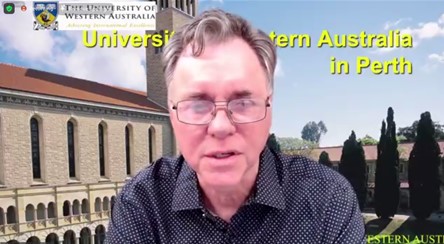 The event closed on yet another high. Nine Year 1 LKCMedicine students, who call themselves the LKChamber musical ensemble, performed an uplifting classical piece that was a treat for the ears and soul. 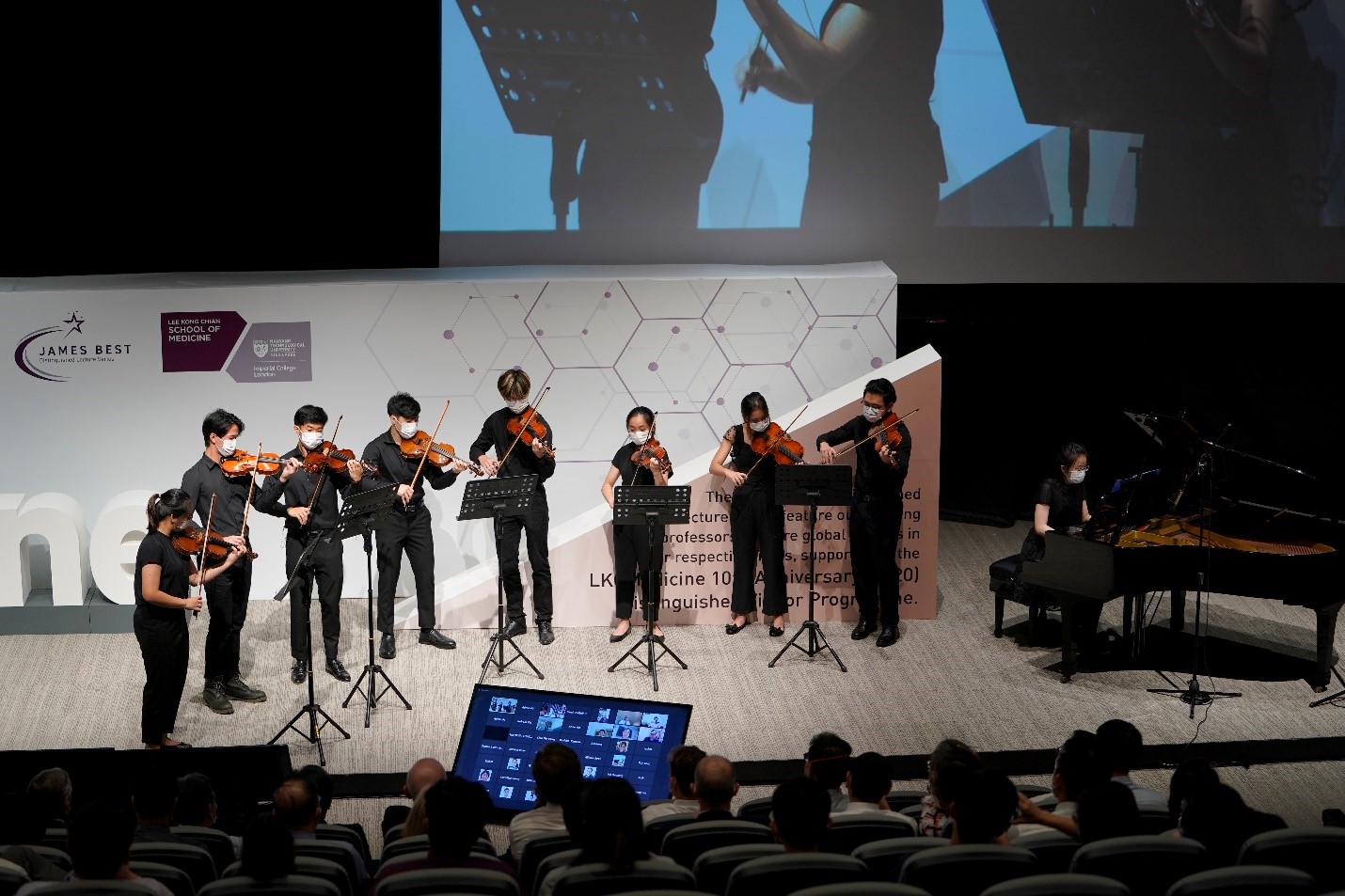 What a way to end the evening! We look forward to the next James Best Distinguished Lecture in August.