LKCMedicine hosted the much-anticipated distinguished lecture by Nobel laureate Professor Barry Marshall on 4 August. Over 200 registrants from the School, and local and international partner institutions, attended the event online and on-site at the Ong Tiong Tat and Irene Tan Liang Kheng Auditorium.
The School is honoured to have Prof Marshall as the speaker of the second James Best Distinguished Lecture, its first ever named lecture. The series is part of the LKCMedicine 10th Anniversary (2020) Distinguished Visitor Programme, funded by a $500,000 gift from an anonymous donor. With matching by the Singapore government, the total gift is S$1 million.
Under this programme, two Distinguished Visitors will be nominated each year to interact, network, and share their expertise with the NTU and LKCMedicine faculty, students, and the wider community, including delivering a public lecture.
The series was launched earlier this year on 19 March with a well-received inaugural lecture by former LKCMedicine Dean Professor James Best himself, titled “Preserving the art and furthering the science of medicine”. Prof Best remains with the School as Visiting Professor and also holds an honorary role with the University of Melbourne. 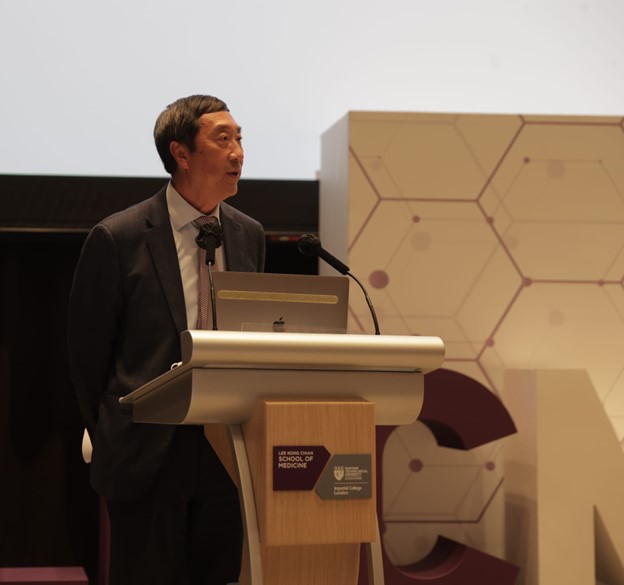 LKCMedicine Dean Distinguished University Professor Joseph Sung, who is also NTU Senior Vice-President (Health & Life Sciences), warmly welcomed the attendees in his opening address.
“The James Best Distinguished Lecture, held twice a year, features eminent professors who are global leaders in their respective fields. Through this platform, LKCMedicine will play a vital role in bringing together thought leaders and industry experts to address thought-provoking issues in medicine, with the perspective of fostering dialogue and advancing discourse in the transformation of medicine, medical education, and research,” he said.
Prof Sung also shared a personal story about Prof Marshall’s Nobel Prize-winning discovery. As a young gastroenterologist, he used to attend a clinic that saw 150 new peptic ulcer patients every week. He would see about 50 patients and perform endoscopy on those known to have ulcers. At that time, ulcer disease was a huge medical problem which was treated by drugs. After reading an article in The Lancet about two professors who discovered the bacteria that causes peptic ulcers, he was very intrigued by the findings. They started to treat the condition with antibiotics and bismuth, which resulted in the patients dropping from 150 to almost zero and the clinic was eventually closed. He light-heartedly added that this was when he became Vice-Chancellor of a university.
Addressing Prof Marshall, he said, “You have saved so many lives. We are greatly honoured that you are here with us to share your adventure in the discovery of Helicobacter pylori.” 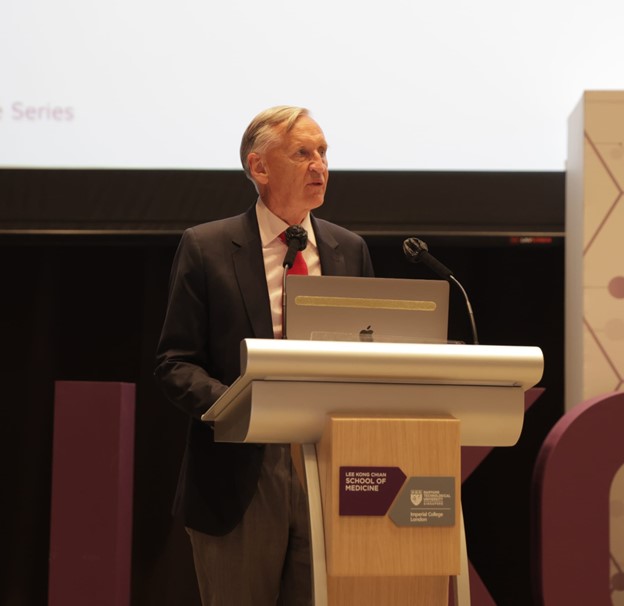 Next, Prof Best introduced the speaker for the night – Professor Barry Marshall. A clinical professor, gastroenterologist and Nobel Laureate, he is known as a pioneer researcher responsible for the most significant medical discovery in the history of gastroenterology.

Highlighting Prof Marshall’s contributions to medicine, Prof Best said, “His remarkable discovery, in partnership with pathologist Robin Warren, that Helicobacter pylori (H. pylori) causes gastritis and peptic ulcer disease and more importantly, can be treated rapidly and inexpensively with a course of antibiotics. It was a revolutionary discovery, seen as a miracle cure by so many people who suffered in agony for years from peptic ulcer disease. For many more, it prevented major surgery.”

“In addition, establishing the causative link between H. pylori and gastric cancer has prevented untold numbers of gastric cancers, which as we know, is a very serious and often fatal disease. In 2005, Barry was awarded the Nobel Prize in Physiology or Medicine, together with pathologist Professor Robin Warren.” 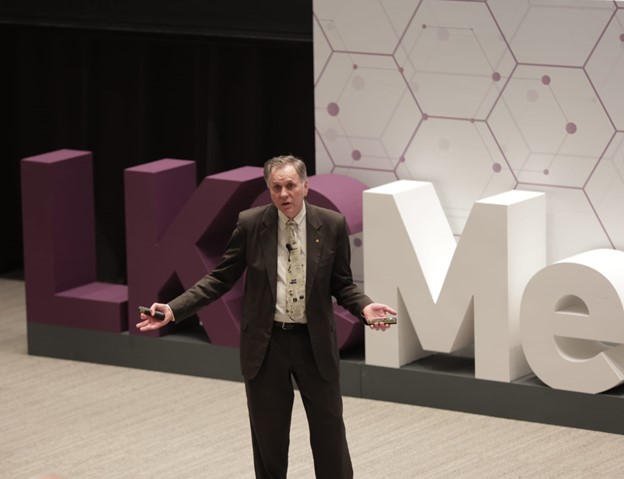 Prof Marshall then took to the stage for the highlight of the evening – his lecture titled “Life Lessons from a Biotech Entrepreneur”.
Kicking off the inspiring session, he spoke about the concept of entrepreneurship and the timeline of an entrepreneur. He shared his advice for young people, “You don’t have to have the same pressure [as we used to]. Be a bit patient, do things a bit better and expect to get a long-term return.”
Prof Marshall shared how he started off as a young investigator presenting a poster at a meeting. It was there that a chance encounter through someone he knew led him to work with Proctor and Gamble.
He went on to share the difficulties that he faced including how his first attempt at publication in 1983 was rejected. It was then that he realised that there were many causes of ulcers which were already known but these were false and an illusion of knowledge.
In 1984, when he was unable to find a suitable animal model, he experimented on himself and drank the H. pylori bacteria. This was followed by placebo controlled double-blind studies where he was able to prove that H. pylori infections caused peptic ulcers.
Drawing from his experience as a biotech entrepreneur, Prof Marshall shared the lessons that he learnt.
Pointing out that everyone is the same, he said, “What works in your hometown will work anywhere. You don’t have to be in the middle of Beijing or New York City to make an innovation a useful innovation. If it works in your hometown, it is probably good enough and you can roll it out.”
He also spoke humorously about dealing with failures and how the people who reviewed his funding applications were failed biotech entrepreneurs. “If your biotech fails… don’t worry there are jobs out there and you’ll be a great one to work for a VC fund because you will be very cynical about all these entrepreneurs,” he added with a laugh.
On relationships with investors, he said, “As an entrepreneur, you have to develop relationships with investors. Don’t just focus on the end point, enjoy the ride. Make a sustainable work ethic or you will burn out. My experience is: allow three years on a project, maybe in five years, it should pay off.”
He added, “A scientist entrepreneur never finishes the product. At some point, the entrepreneur needs to leave or the product will never go out. Make sure you enjoy the journey.”
On relationships with others, he said, “The people you deal with might be around for many years, even the length of your career. I would say those people are still going to be sitting next to you so don’t make any enemies. It is not necessary.” The audience participated enthusiastically in the Q&A session that followed, chaired by LKCMedicine Associate Professor of Nutrition, Digestion and Metabolism Sunny Wong, who is also the Programme Director of Microbiome Medicine and Assistant Dean of Academic Medicine.
Addressing questions from the floor and via Zoom, Prof Marshall gave advice to young scientists who are interested in entrepreneurship to focus on curiosity driven research and new technology, how to apply his philosophy in medical education, and what will be helpful for scientific establishments to do so they do not make the same mistake of rejecting his paper. 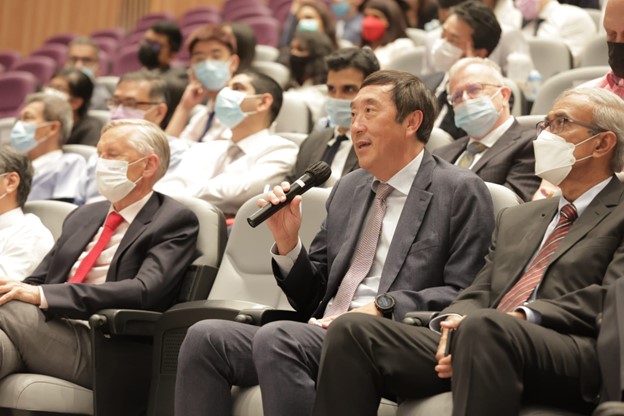 The audience, including Dean Professor Joseph Sung, participating enthusiastically in the Q&A session

Following the Q&A session, it was announced that Professor Dame Sally Davies, 40th Master of Trinity College, will be the next speaker in the series. Prof Davies, an internationally renowned academic leader, is the Chief Medical Officer for England and Chief Medical Advisor to the UK government. She is a Fellow of the Royal Society and a Fellow of the Academy of Medical Sciences. She was also made Dame Commander for services to Medicine in 2009. We look forward to hosting Prof Davies and the upcoming lecture next year!