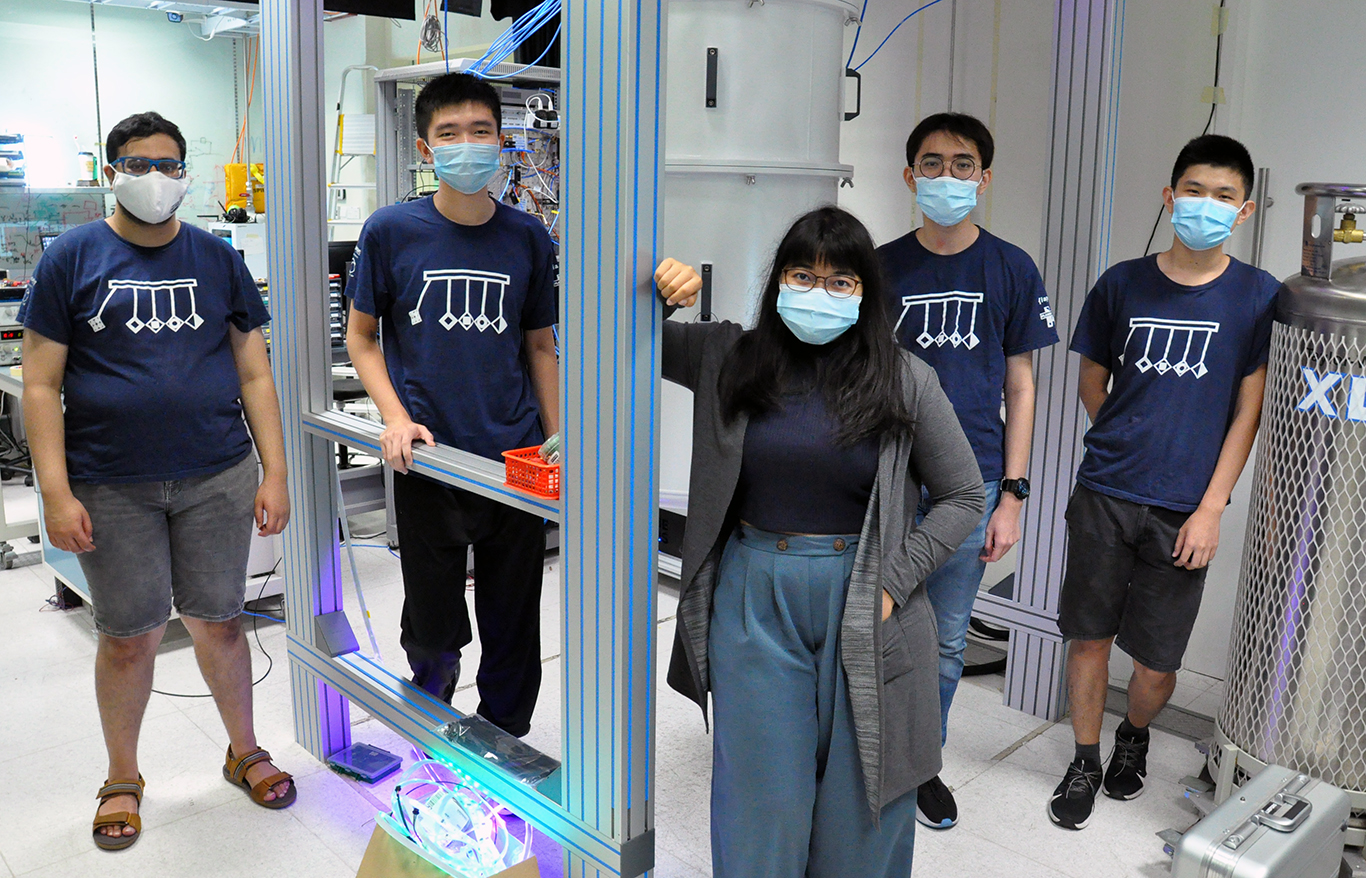 In May 2021, a team of four undergraduate students represented NTU and Singapore in PLANCKS, an international physics competition for undergraduate and masters students. After a 36-hour problem-solving marathon, the team placed 21st out of 50 participating teams worldwide. This year’s PLANCKS team benefitted from training by an extensive network of NTU alumni working and studying in Singapore and overseas.

Organised annually by the International Association of Physics Students (IAPS), the 2021 edition of PLANCKS (the Physics League Across Numerous Countries for Kick-ass Students) was conducted fully online due to the Covid-19 pandemic. Hosted by students from the Physics, Engineering Physics and Astronomy Society of the University of Porto, Portugal,  the competition consisted of 50 teams of 3-4 students each, tackling a set of difficult problems ranging across all fields of physics. The competition took place over a non-stop period of 36 hours, in an open-book format. While solving the problems, the competitors were allowed to consult any resources, either online or offline.

In preparation for the competition, weekly training sessions were held from March to May, to improve the team members’ ability to solve difficult problems quickly. These training sessions were an evolution of a tradition established by SPMS alumni who had taken part in previous PLANCKS competitions.
For many years, PLANCKS training sessions at SPMS had been organized by Nguyen Tin Nghia (Class of 2014), who worked as a teaching assistant at SPMS from 2015 to 2018. Tin’s training sessions comprised of focused problem-solving in fundamental physics topics such as classical mechanics, quantum mechanics, statistical mechanics and electromagnetism. He also coordinated with other staff and faculty members to organise workshops in advanced topics such as relativity, electrodynamics and fluid dynamics.
After Tin left SPMS in 2019 to pursue PhD studies abroad, his responsibilities were taken up by a new group of PLANCKS alumni, supported by SPMS faculty members such as Associate Professor Chew Lock Yue and Dr Koh Teck Seng.
This year’s PLANCKS team and their trainers had to cope with the unique challenge of training for the competition in the midst of Covid-19 restrictions. However, these circumstances also opened up new opportunities, such as allowing the NTU team to connect with PLANCKS alumni studying overseas.
One of the trainers, Erickson Tjoa (Class of 2017), is currently pursuing a PhD at the University of Waterloo in Canada. “The virtual training sessions provided a chance for me to give back to SPMS even from abroad,” says Erickson. “I was able to coach the team on general relativity and particle physics, topics related to my current studies.”
Tin, who is currently pursuing a PhD at the University of Colorado, also returned to conduct trainings on atomic physics and electromagnetism.

The other trainers, Ha Quang Trung, Khatee Zathul Arifa, and Wang Yuzhu, are all currently working or pursuing graduate studies at SPMS.

During the 36-hour PLANCKS competition, the V6 team gathered and undertook the written test together in the Odyssey Room at SPMS. They engaged in hours of brainstorming around a conference table, collecting thoughts and clarifying concepts in the process.
The problems they faced during the competition were designed by professors from all over the world, covering many different areas of physics. The problems dealt with the accretion of stars, the detection of exoplanets, working principles of MRI, and other cutting-edge topics.
“The competition introduced us to the plethora of fields of physics that exists,” says Gupta Chaitanya, one of the team members. “The questions challenged our insights into the theoretical foundations of physics, and gave me an awareness of the beauty of the subject as a whole.”
Chai Siao Yang, another team member, said: “During the competition, we scribbled, debated and struggled. During the breaks, we joked, chattered and laughed. The questions were difficult but we had each other’s backs. I will never forget this amazing adventure with my friends, and I’m looking forward to more in times to come.”

Aside from the competition, the organizers of PLANCKS treated participants to a range of online scientific talks and social events. The students attended talks covering topics on the frontiers of physics research, including plasma physics, space weather, and pulsars.

Strengthening the physics community in NTU and Singapore

Moving ahead, the PLANCKS community at SPMS intends to build on the tradition of close collaborations between existing undergraduate students and alumni.
Both the 2021 PLANCKS team and their trainers hope that the PLANCKS community at SPMS will continue to flourish in the years to come. They are also grateful to all the faculty members who have supported the PLANCKS teams through the years. Next year’s PLANCKS competition will be held in Munich, Germany, and SPMS hopes to have a strong in-person showing! 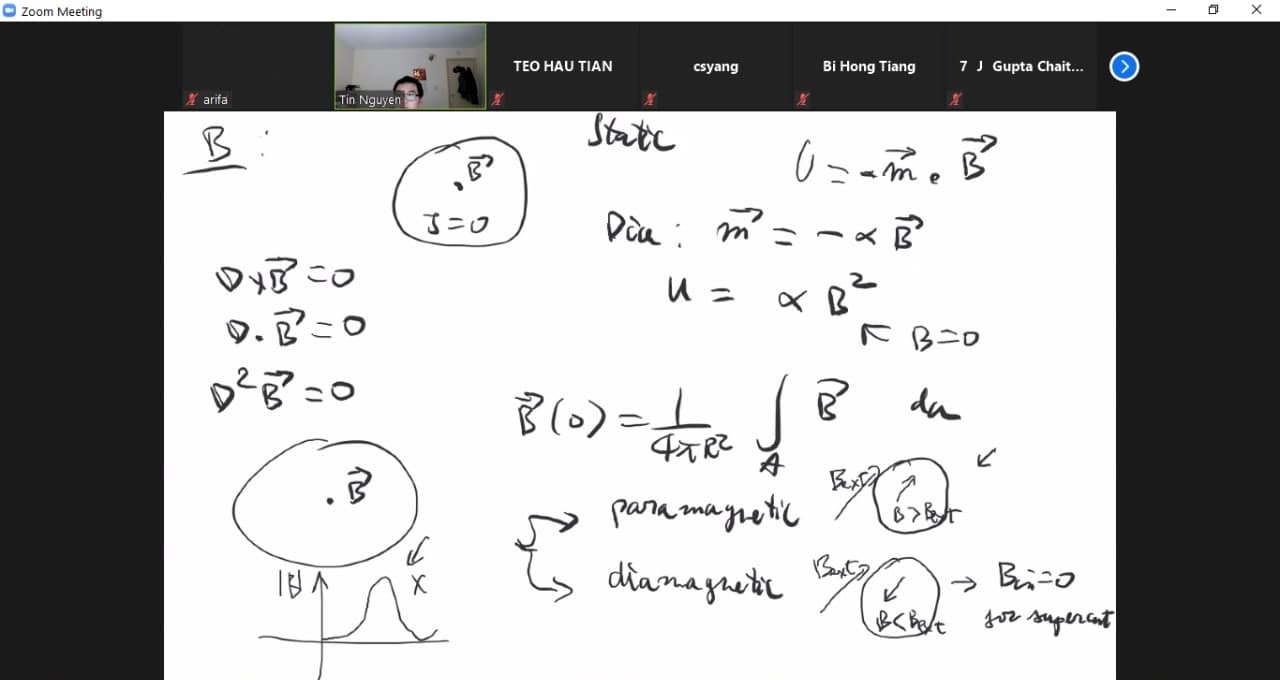 Photo: A Zoom screen cap of the first training on electromagnetism with Arifa and Tin (trainers) and the four PLANCKS team members.

Congratulations to the winners of the 29th International Mathematics Competition