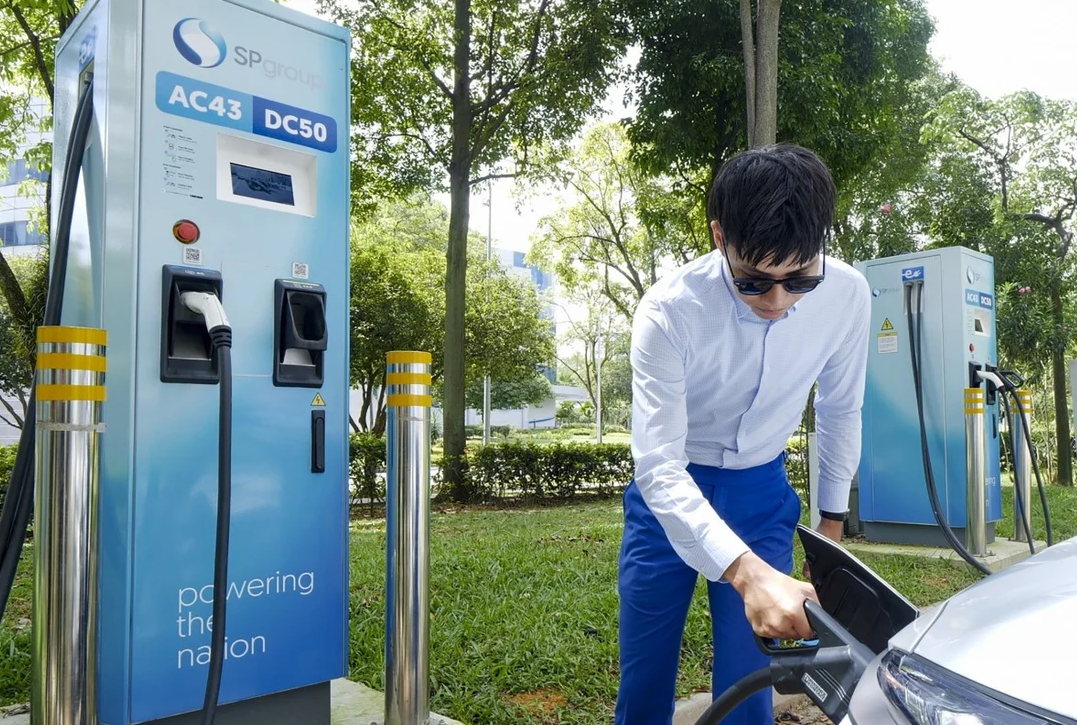 SP Group has 276 EV charging points installed across Singapore and plans to ramp up installation when EV adoption picks up in the city state. Photo: Handout

Singapore is likely to see a boom in electric vehicle (EV) charging operators as efforts are made to expand the charging infrastructure for green cars amid moves by the government to phase out internal combustion engine (ICE) vehicles by 2040.
Under the Singapore Green Plan unveiled on February 10, 60,000 EV charging points will be built by 2030 at public car parks and private premises, more than double the target of 28,000 set last year, a move that has enthused EV charging providers.
“With the anticipated growth of EVs, key infrastructure such as charging points will gradually increase … and we can expect [the EV charging market] to gain significant traction in the coming years,” said Anshuman Tripathi, programme director of the Energy Research Institute at Nanyang Technological University.
He said that with backing from the government, commercial operators were likely to help build up the EV charging infrastructure. 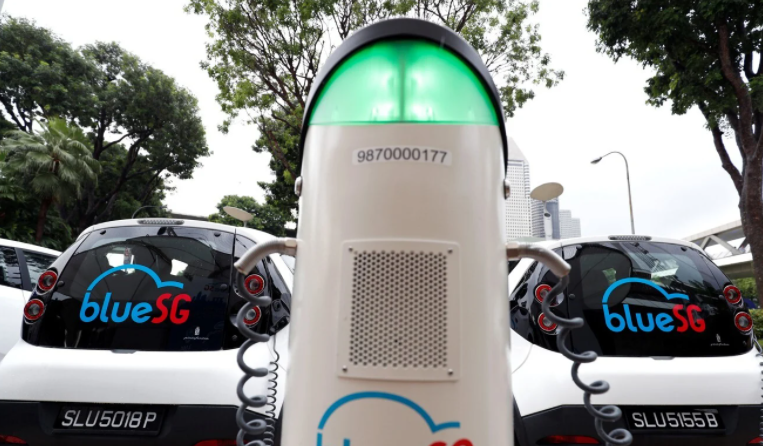 BlueSG electric car-sharing vehicles are parked at a charging station in Singapore. Photo: Reuters
Green cars – fully electric and plug-ins – are likely to account for one-third of the overall cars by 2030, according to a projection by transport minister Ong Ye Kung.
Singapore’s EV market is minuscule at present. As of January, there were around 1,274 fully electric cars and 561 plug-in hybrids out of 636,483 cars on the road, accounting for 0.2 per cent of the overall total, according to figures from the Land Transport Authority. Of these around 500 full EVs are privately owned and the rest are Bollore Bluecars owned by BlueSG, an electric car-sharing company.
BlueSG, a unit of France’s Bollore Group, also dominates the EV charging market alongside national grid operator SP Group. Out of the 1,900 charging points currently in Singapore, SP Group owns 276. BlueSG has 1,515 charging points, of which 295 are open to private EV owners.
SP Group has ambitions of becoming the largest EV charging operator in Singapore, with plans to corner around half of the market when EV adoption picks up, according to CEO Stanley Huang.
“[Our] 276 charging points today look small, but there are only 500 private EVs on the road,” Huang said. “We are building up slowly, calibrating based on the pace of EV adoption. When there is an explosive adoption of EVs, maybe in one to two years’ time, then we can ramp up the charging points to match demand.” 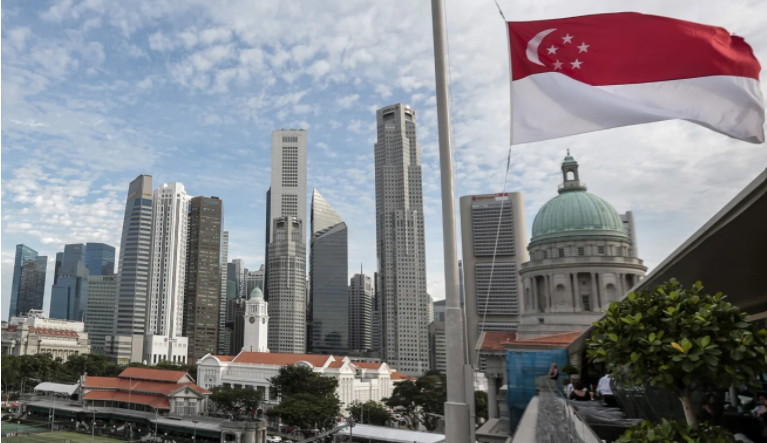 Electrics and plug-ins are likely to account for one-third of Singapore’s overall cars by 2030, according to a forecast by the city’s transport minister. Photo: EPA-EFE
Set up in 2017, BlueSG is in the process of being acquired by local vehicle leasing company Goldbell Group, with the deal likely to be completed by August.
“We remain the biggest operator of charging points,” said Jenny Lim, BlueSG’s commercial and network director. She said that they were closely following the government’s directions before finalising their plans for EV charging, pointing out that car-sharing remains the company’s business priority.
According to Goldbell, BlueSG’s existing EV charging infrastructure will be managed separately under Bollore as Goldbell has plans to partner with other EV charging providers for the car-sharing users.
Charge+, a subsidiary of Temasek-backed renewable energy firm Sunseap Group, is also keen to get into the game. It plans to build 10,000 charging points by 2030, of which 4,000 will be located in condominiums.
“It is a chicken and egg conundrum in Singapore – many are interested in EVs, but do not see enough chargers out there,” said Goh Chee Kiong, chief executive of Charge+, who pointed out that some 16 per cent of Singaporeans live in condominiums.
“We want to break the conundrum by investing ahead of time. Once you see a proliferation of EV chargers across Singapore, the mindset will change,” Goh said.
But analysts warned that for Singapore to increase the uptake of electric cars, the government must make them affordable by bringing down the cost to the level of petrol-driven vehicles. They said that Singapore has a much higher initial purchase price for electric and ICE vehicles compared to other countries.
Last week Tesla’s sales portal went live in Singapore amid greater fanfare. The company’s Model 3 has a starting price of S$115,000 (US$87,000). In China, the same model starts at 249,000 yuan (US$39,000) after subsidies. 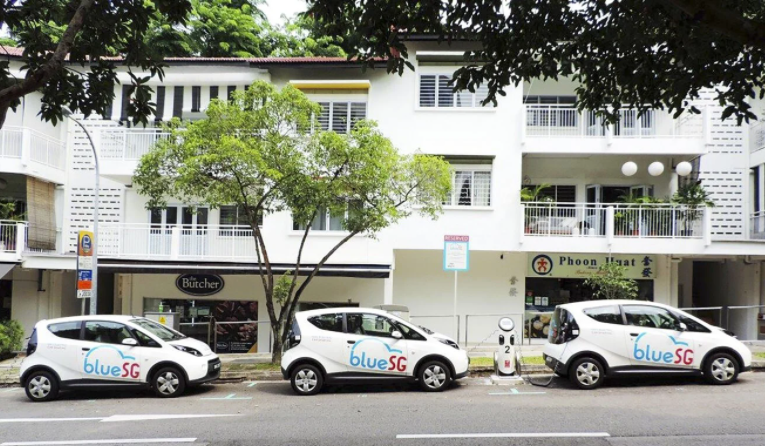 BlueSG has 674 electric cars deployed across Singapore for car-sharing use. Photo: Handout
“It would take the average driver about seven years of driving to break even the vehicle cost,” said Andrey Berdichevskiy, director of Deloitte’s Future of Mobility Global Solution Centre. “Despite the multiple EV subsidies from the government, it is difficult to achieve a levelled price.”
The Singapore government, however, is taking steps to encourage the shift to electric cars, announcing additional incentives in the budget on Tuesday to narrow the cost difference between EVs and ICE cars. Starting from January next year, the additional registration fee – the tax on the car’s import value – will be waived for a period of two years, and the road tax for EVs will be brought in line with ICE cars.
Goh of Charge+ said it is only a matter of time before electric cars become mainstream both in Singapore and globally.
“EVs are coming and we have to get ready now,” he said.

The Big Read: After a decade of fits and starts, it’s all systems go for Singapore’s electric vehicle dream

Amid push for electric vehicles, getting charging points installed in condominiums remains a challenge