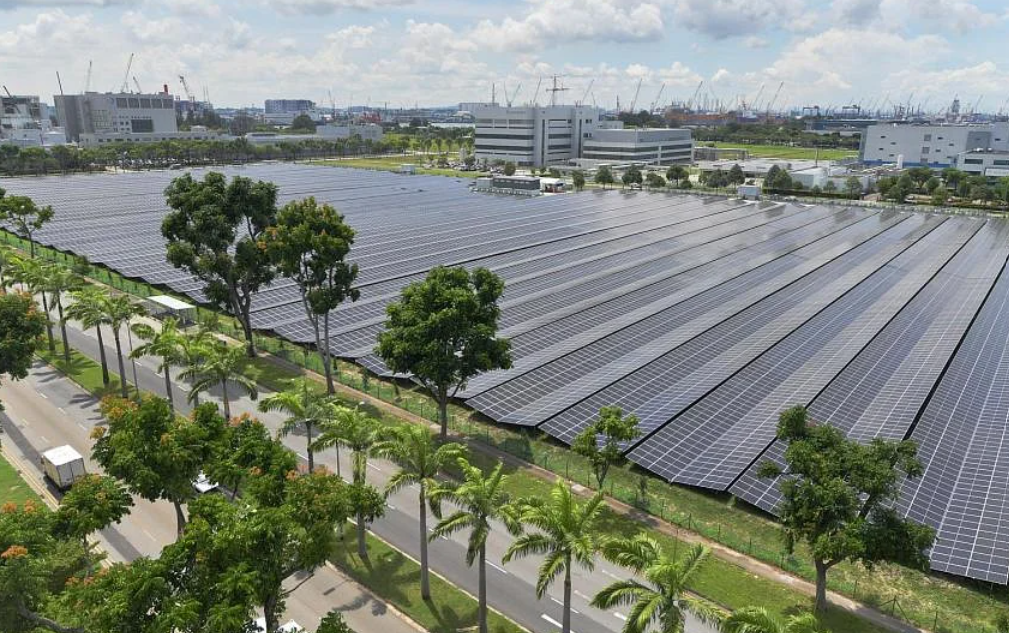 As newer technologies become available, it makes sense for customers to upgrade their solar panels to higher efficiency ones. ST PHOTO: ALPHONSUS CHERN

SINGAPORE - As Singapore ramps up solar energy deployment to meet its growing clean energy needs, the issue of how to deal with solar panel waste is proving to be a challenge.

Dr Stanley Wang, co-founder and chief executive of solar tech firm EtaVolt, estimates that up to 5,000 tonnes of photovoltaic waste could be generated within the next two years, assuming that these solar panels are not recycled properly.

EtaVolt, a spin-off from the Nanyang Technological University (NTU), works with firms to sustainably recycle their used solar panels and helps them determine when to upgrade to more efficient ones.

The country currently has a solar capacity of more than 630 megawatt-peak. It is aiming to ramp up solar energy deployment to at least two gigawatt-peak by 2030 as part of the Singapore Green Plan.

Countries around the world have also been rapidly increasing their solar energy deployments amid a push for renewable energy, but this has led to solar panel waste.

The latest report by the International Renewable Energy Agency (Irena) published in 2016 estimated that the world could face up to 78 million tonnes of photovoltaic waste by 2050.

As newer technologies become available, it makes sense for customers to upgrade their solar panels to higher-efficiency ones, said Prof Subodh.

Dr Wang said that while high-quality solar panels could have a lifespan of around 20 to 25 years, they are generally about 10 per cent to 15 per cent less efficient beyond the 10-year mark.

Thus, those deploying solar panels now would be looking to have them replaced in  seven to 10 years, said Prof Subodh.

Dr Wang said the lifespan of solar panels could also be shortened if they are damaged during transportation and installation, and in lightning strikes.

"Given that Singapore's solar panel deployment started to pick up over the past five years, we expect significant solar panel replacement or recycling to increase significantly by 2025," said Prof Subodh.

But solar panel recycling is not without problems.

They are made of materials such as aluminium, glass and silicon, which can be potentially recycled, but are often difficult to separate, said Associate Professor Nripan Mathews, who is the cluster director of renewables and low-carbon generation (solar) at ERI@N.

He said that while Singapore could develop new recycling technologies for a pilot plant here, it could be more cost-effective to have a large-scale recycling plant in the region, collating solar panel waste from countries in South-east Asia.

This is because Singapore does not have as much solar panel waste, compared with other countries.

A spokesman for solar panel firm EDPR Sunseap told The Straits Times that only about 300 of its solar panels have been recycled thus far, as most of its panels have yet to reach the end of their life cycle.

Some were damaged during installation, while others had manufacturing defects, lowering their efficiency.

"One of the challenges to solar panel recycling is the cost, and there are only a handful of recycling plants or vendors who are capable of recycling solar panels here," the  spokesman added.

Under the National Environment Agency's (NEA) Resource Sustainability Act, companies that import solar panels and sell or install them here must provide free take-back services for their customers when the solar panels reach their "end of life".

These companies can then engage NEA-licensed waste collectors or e-waste recyclers to dispose of or recycle these solar panels.

NEA said it is currently funding two projects under its Closing the Waste Loop initiative, and they involve recovering valuable materials through solar panel recycling.