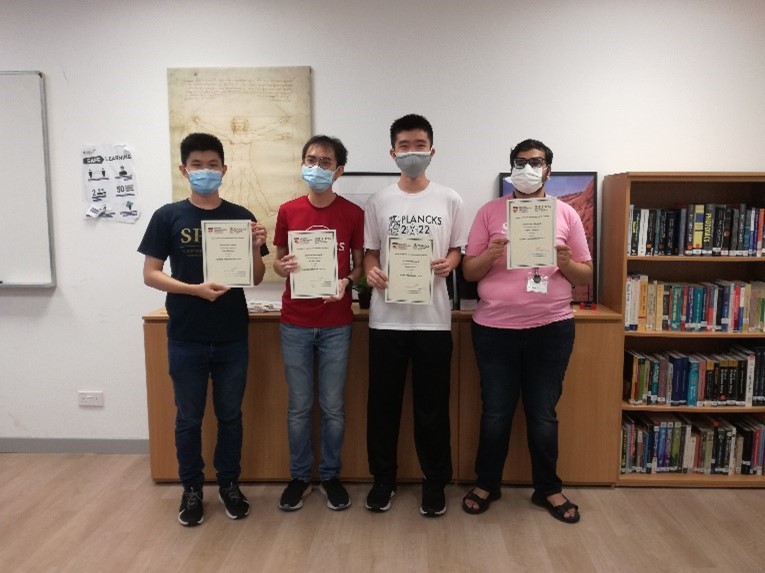 The PLANCKS 2022 Singapore Preliminary competition took place on the 19th and 20th of February 2022 in the School of Physical and Mathematical Sciences (SPMS), Nanyang Technological University, Singapore.

PLANCKS, which stands for Physics League Across Numerous Countries for Kick-Ass Students, is an annual international theoretical physics competition where teams of both undergraduate and postgrad students compete to solve 10 challenging physics problems in a stipulated time of 4 hours. The Singapore Preliminary was organised by the Odyssey Programme at SPMS, NTU.

In a first-time collaboration, the Singapore Preliminary was held jointly with the UK & Ireland PLANCKS Preliminary. Participants of the two preliminaries shared the same question paper, containing questions contributed by members of both countries.

In total, 24 students from 6 teams participated in this year’s competition. Over the two-day event, participants had the opportunity to engage in a line-up of exciting and intellectually stimulating activities, ranging from guest lectures on various topics in physics to the pivotal 4-hour problem solving session.

The top prize for the 2022 Singapore Preliminary went to Team V6, comprising of Teo Hau Tian, Chai Siao Yang, Tiang Bi Hong, and Gupta Chaitanya. They will be representing Singapore in the 2022 international PLANCKS competition in Munich later this year.

“This event not only provides us with a platform to think critically, creatively on challenging physics problems, but also allows team discussions while solving the questions,” says Teo Hau Tian, from the winning team, Team V6. “Compared to other competitions, this team-based competition enables us to exchange new ideas and to approach the questions from a totally different perspective.”

The 2022 international edition of PLANCKS will take place from the 5th to 8th of May 2022 in Munich, organised by the Faculty of Physics of LMU Munich and hosted by the German Physical Society (DPG).

Congratulations to all the winners and wishing all the best to Team V6 in the upcoming international PLANCKS!

Congratulations to the winners of the 29th International Mathematics Competition