The Lee Kong Chian School of Medicine (LKCMedicine) will be receiving an $11 million gift from the Estate of Irene Tan Liang Kheng to set up an endowment fund to further medical education and research in healthcare.

The gift to LKCMedicine is the largest by the Estate to a single beneficiary. With matching by the Singapore government, the total endowment raised is $22 million.

The Irene Tan Liang Kheng Memorial Fund will be established to support LKCMedicine's efforts in ensuring that deserving Singaporean students will not be deprived of the opportunity to pursue a quality medical education due to financial difficulties.

The gift will also go into establishing two chair professorships at LKCMedicine to study key diseases like diabetes and mental health, as well as research into serious games that aim to improve population health and provide patient-centric care.

The gift was formalised at a signing ceremony today between Nanyang Technological University, Singapore (NTU) President Subra Suresh and the Trustee of the Estate and nephew of Irene Tan Liang Kheng, Mr Tan Hsuan Heng.

In recognition of this generous gift, Professor Suresh unveiled the Ong Tiong Tat and Irene Tan Liang Kheng Auditorium at the school's Clinical Sciences Building on its Novena Campus. The 500-seat Auditorium is named in honour of the late philanthropic couple.

Professor Suresh said, "NTU deeply appreciates this gift from the Estate of Irene Tan Liang Kheng which will go towards research and education. This is an investment in the future of young minds and the betterment of the human condition that will see ever-growing returns for the state of humanity for years to come." 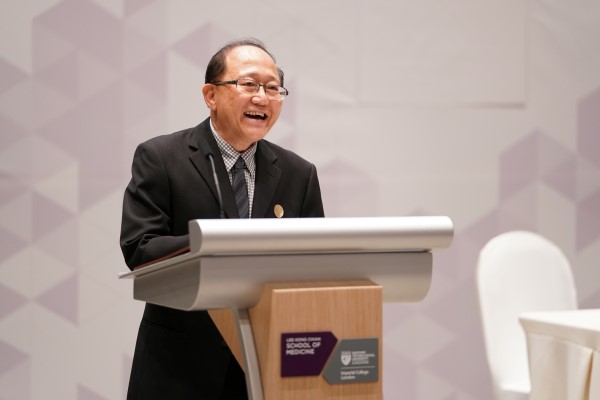 Mr Tan Hsuan Heng said, "My aunt and uncle, Irene Tan Liang Kheng and Ong Tiong Tat, strongly believe in the value of education and hence, they have chosen to donate to this worthy cause," adding that the two chair professorships at LKCMedicine revolve around causes close to his heart.

"My uncle had health problems, including diabetes. Mental health is important to me; my mother had dementia. I would like the two chair professorships to concentrate on medical research."

LKCMedicine Dean Professor James Best noted the gift would contribute greatly to the School's thrusts to produce impactful research and ensuring academic excellence. He said, "LKCMedicine, as a world-class medical school, places great importance on research as well as education. We strive to transform healthcare through excellent translational research and this funding for two of our major research areas will significantly extend our capability."

The gift will fund the newly set-up Irene Tan Liang Kheng Scholarship to be presented to academically bright but needy Singaporean students for the full five years of the LKCMedicine MBBS programme.

To be awarded from the 2019/2020 academic year, one scholarship will be awarded per new cohort each year.

The scholarship aims to allow outstanding students to join the medical profession and serve the community. "I hope the scholars will have a heart for the community and give back to society when they become doctors," said Mr Tan Hsuan Heng. 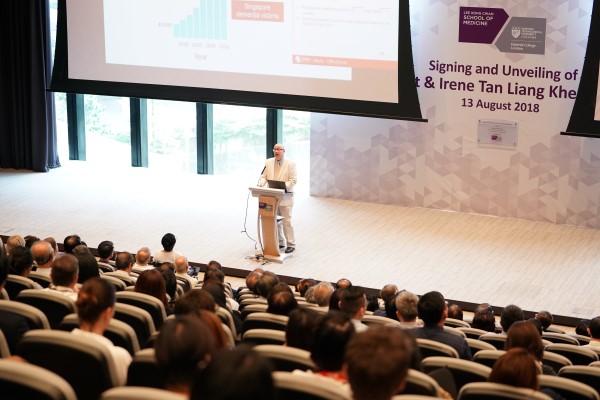 LKCMedicine Professor of Neuroscience and Mental Health George Augustine has been appointed the inaugural Irene Tan Liang Kheng Chair Professor in Neuroscience. He has recently attained an MOE Tier 3 Type B Grant of $19,441,800 toward dementia research, that forms part of the Ministry of Health's push to address the needs of Singapore's rapidly ageing population.

The Chair Professorship in Neuroscience will be a boost to the School's research ambitions in neuroscience and mental health, for the better understanding of the causes and potential treatments of these diseases.

The Ong Tiong Tat Chair Professorship in Diabetes Research will spur LKCMedicine's research into diabetes and other metabolic disorders, in line with the Singapore government's call for a war on diabetes in 2016.

According to the Ministry of Health, one in nine Singaporeans have diabetes while one in three have a lifetime risk of getting it. At this rate, by 2050, the number of Singaporeans with diabetes will reach a million in number.

LKCMedicine is currently conducting research on the roles that genetics, lifestyle and the environment play in the rising trend of diabetes. The search for the inaugural Ong Tiong Tat Chair Professorship in Diabetes Research is ongoing.

The gift will also support a Serious Games Grant at the Games for Health Innovations Centre (ALIVE) over five years.

ALIVE promotes collaborative research into serious games that aim to benefit public healthcare in Singapore and the region. It is a joint centre by LKCMedicine and Tan Tock Seng Hospital, the flagship institution of National Healthcare Group and the School's primary clinical partner.