Our nervous system encodes, computes and stores information by generating electrical signals. These signals are produced by ion channels, proteins found in cellular membranes. Channels possess a narrow pore that allows ions to diffuse from one side of the membrane to the other side, thereby generating electrical current. The 2021 Nobel Prize in Physiology or Medicine was awarded to Prof David Julius (University of California, San Francisco) and Prof Ardem Patapoutian (Howard Hughes Medical Institute, Scripps Research) for their studies of ion channels that are responsible for our ability to sense temperature and touch. 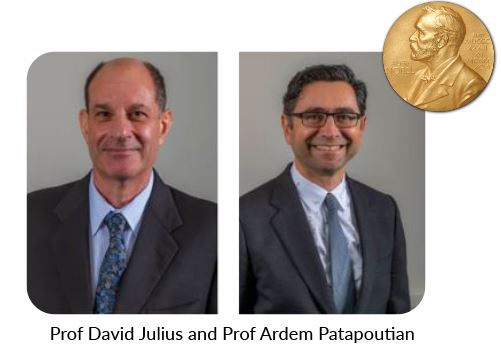 Although we are sensitive to stimuli such as temperature and touch, how our nervous system transduces such stimuli into electrical signals was very poorly understood until Julius began his ground-breaking research. He set out to understand how our bodies sense capsaicin, a chemical that gives us a hot sensation when we eat chili peppers. Julius and his colleagues identified a gene, called TRPV1, that encodes an ion channel that responds to capsaicin: inserting this channel gene into cells made the cells became very sensitive capsaicin. Remarkably, addition of TRPV1 also made the cells very responsive to heat, specifically temperatures above 40oC. Thus, the same ion channel that allows us to sense hot chilis also allows us to sense actual heat!

Patapoutian and his lab colleagues went on to do pioneering work to identify the ion channels involved in sensing touch. Using a clever genetic screening strategy, they identified two ion channel genes that confer mechanical sensitivity to cells. One of these, called Piezo2, seems to be involved in the sensation of touch in skin: genetic elimination of this gene in mice eliminated the ability to sense light touch of the skin. Human patients with defective Piezo2 channels also have impaired proprioception, the ability to sense the position of their limbs during movement. Piezo2 is thus a mechanosensitive channel that transduces mechanical force into cellular electrical signals.

In summary, the work of Julius and Patapoutian greatly enhances the understanding of how we sense our external and internal environments. This work was richly deserving of the 2021 Nobel Prize in Physiology or Medicine and is the latest - dating back to the 1963 Prize awarded to Alan Hodgkin, Andrew Huxley and Jack Eccles – to acknowledge the profound importance of ion channels in both physiology and medicine.

For more information, watch the video here on 2021 Nobel Prize In Physiology or Medicine.

Frontiers in Peptide Science and Drug Discovery: A Scientific Symposium in Honour of Professor James Tam

Good Recipe for Good Health – WHAT and WHEN to Eat

Bio-intelligent Lasers for Healthcare: Tiny Lasers that can Feel and Think