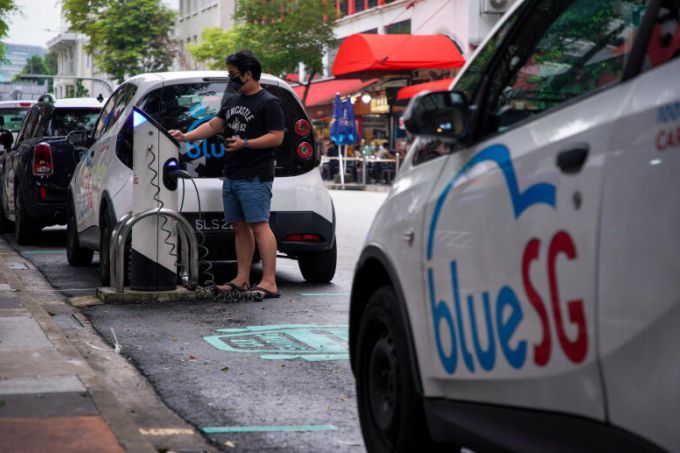 Singapore's push for electric vehicles (EVs) has lured companies from a myriad of sectors, from renewable energy to electronics and payments, eager to get a foot into the ecosystem. PHOTO: CMG

SINGAPORE’S push for electric vehicles (EVs) has lured companies from a myriad of sectors, from renewable energy to electronics and payments, eager to get a foot into the ecosystem.

While EVs are widely seen as an environmental asset, their economic imperative must also be examined.

In its most conservative scenario, the International Energy Agency estimates that the global EV stock, excluding two- and three-wheelers, will expand from about eight million in 2019 to close to 145 million by 2030, corresponding to an annual average growth rate of close to 30 per cent.

A June 2021 report by Fitch Solutions forecasts EV sales in Singapore growing at an average of 40 per cent year-on-year over 2022-2030 to reach a penetration rate of about 10 per cent of total vehicle sales.

“Singapore’s proximity to the markets in Asia will also enable companies to capture regional growth and in turn create more opportunities for Singapore and Singaporeans,” he added.

Professor Subodh Mhaisalkar, executive director of the Energy Research Institute at Nanyang Technological University (ERI@N), thinks EVs spell a new dawn for Singapore’s clean technology sector. “There are similar building blocks as well as similar platform technologies that can be used from transport and could be used for industrial applications,” he said.

For instance, the platform used in an EV’s battery management system can also be used on a harbour craft or in air transport applications, resulting in economies of scale, he explained. “There will also be economic benefits in terms of jobs, and so on. This, for me, is a clean tech industry. (Singapore) could be seen as a model of how it would work.” he said. He noted how the country’s Green Mark scheme to promote energy-efficient buildings has also been adapted by other countries in Asia.

Companies in the energy sector, too, have jumped on the bandwagon. Charge+, which offers ultra-slim EV chargers, is solar energy provider Sunseap Group’s foray into the sector. Charge+ chief executive Goh Chee Kiong noted the potential of capitalising on the growing demand for sustainable solutions as a whole. “The fact that our mothership is Sunseap is very beneficial. We often see the same landlord who has used renewable energy saying, ‘Shall I also look at EV charging?’ The synergies are tremendous. Landlords are not seeing sustainable measures in isolation,” Mr Goh said.

Charge+ is developing a proprietary ultra-slim alternating current charger with dual charging points designed for plug and play at existing car parks. It previously announced plans to install 10,000 EV charging points across Singapore in the next decade. That target has since been revised upwards, with the new figure to be announced.

BT reported earlier this month that manufacturing firms, too, are looking to tap the fast-growing sector. Taiwan’s Foxconn, for instance, intends to leverage its expertise in automotive and smartphone component manufacturing to manufacture EVs. Analysts suggest that Singapore-listed tech manufacturing stocks that have relationships with auto customers will benefit from the growing industry.

In Singapore, electric distribution business Lim Kim Hai Electric is another example of an entity in an adjacent industry vying for a slice of the EV pie. “We were initially already doing electrical materials distribution. We have a good client base across commercial and industrial sectors, so moving into EVs is quite a natural extension,” said Francis Pan, the company’s general manager.

Lim Kim Hai Electric has been working with the likes of local payments startup Beep and global manufacturing company ABB to present a “total EV proposal” to existing customers, Mr Pan said. Beep is an example of how the push for EVs presents business opportunities even to sectors outside transport or mobility. The Singapore startup, incorporated in 2018, began its journey in the vending industry. Beep was the brainchild behind the platform for Temasek’s mask and hand sanitiser distribution programmes amid the Covid-19 pandemic. Now, the firm has set its sights on the EV marketplace and is working with charge point operators across Asia Pacific to roll out backend technology and payments platforms.

“The good thing about South-east Asia is that it has a very established QR infrastructure which we can tap on,” said Terence Tan, Beep’s head of growth and e-mobility.

Beep’s research shows that some 300,000 charging stations will be installed across the region over the next three years. But the current charging landscape is fragmented, with users having to meddle with a dozen different apps, he said. Beep wants to solve these issues.

For instance, charging stations, including current petrol stations, could expand to include more shopping and food options as drivers may linger while waiting for EVs to be charged, Mr Pan said. Charging times depend on various factors, including the size of the vehicle, battery type, and speed of charging point.

Mr Tan added that shopping malls are another sector that can capitalise on this. “Maybe in the future, a mall owner could incorporate a simple plugin into the existing rewards app, and let consumers exchange rewards for free EV charging in the mall,” he said.

Despite the host of economic gains, it would be hard to place a value on the benefits of electrifying road transport, not least in view of the attendant health and environmental benefits – even as some have said that EVs alone are not yet the panacea for climate change.

As ERI@N’s Prof Mhaisalkar put it: “How do you project an economic value to improvements in public health? I think there are other benefits that are critical but cannot be put through a particular economic analysis.”