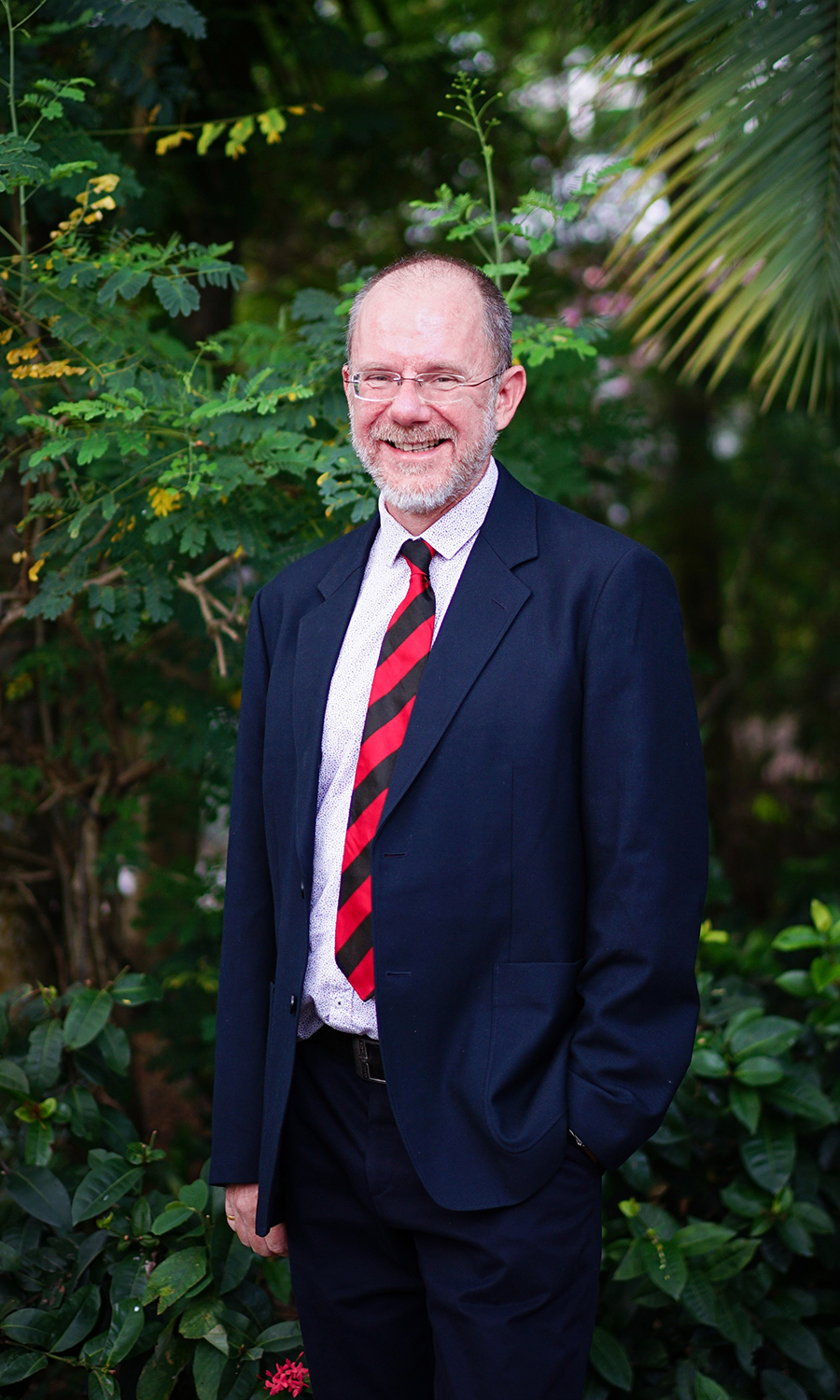 From the North Pole to the South Pole, our planet is going through rapid climate change linked to accelerated carbon dioxide (CO2) emissions from the burning of fossil fuels. Closer to home, one of the biggest threats Singapore is bracing against is sea-level rise. Combined with heavy precipitation, it will lead to the risk of flooding in low-lying areas.

These complex environmental issues are what keep Simon Redfern, a geoscientist and experimental materials physicist, up at night. Prof Redfern has led NTU’s College of Science since August 2019 and holds the appointment of the NTU President’s Chair in Earth Sciences.

He joined NTU after a distinguished career at the University of Cambridge in the UK, where he was Professor of Mineral Physics and Head of the Earth Sciences Department. He continues to serve as a member of the UK government committee on radioactive waste disposal.

In this interview with Pushing Frontiers, Prof Redfern shares his views on the leading role that NTU can play in tackling big environmental challenges facing Singapore and the region.

Q: What is mineralogy, and how does it provide insights into environmental issues?

A: Mineralogy is effectively materials science of the environment. Mineralogists study how materials behave, what their properties are under various environmental conditions, and how they control and interact with the environment. For example, we are currently going through a period of rapid climate change with accelerated CO2 emissions from fossil fuel burning. Looking at records of past climate—for instance, revealed in the trace elements stored in the calcium carbonate mineral shells of marine organisms that lived millions of years ago—we can work out CO2levels of the past and learn about the environmental conditions the organisms lived in. These analyses tell us about a large spike of atmospheric CO 2 approximately 57 million years ago that followed a rapid increase in temperature. After the spike, it took about 100,000 years for CO2 levels to return to previous levels in a process called the slow carbon cycle. So, we know that it would take about 100,000 years to bring the currently increasing levels of CO2 in the atmosphere back to pre-industrial concentrations—too long a wait for us as a species.

Q: What would you say are the biggest environmental challenges facing Singapore and the region?

A: One of the biggest threats to Singapore is sea-level rise, which will happen as ocean waters expand due to increasing temperatures and the melting of polar ice caps and glaciers. Another big threat is the increase in temperature variations. Projections forecast more days with extreme temperatures associated with more severe thunderstorms. Heavy precipitation together with higher sea levels will lead to the risk of compound flooding of Singapore’s many low-lying areas where the water can’t escape.

In addition, Singapore shares all the risks of developing and developed countries in how to sustain cities without impacting the environment.

Q: How is NTU helping to address these challenges?

A: NTU has many centres and institutes that work in a cross-disciplinary manner on environmental issues in energy, water and biological systems. It is also ranked highly in environmental sciences.

Since many environmental challenges are multi-dimensional problems that rely not only on understanding science and engineering, but also on understanding people’s behaviour and how societies work, NTU—as a comprehensive university that also includes humanities, arts, social sciences, business and medicine—is in a good position to bring people together to implement change.

Q: You recently gave a public talk titled “Surviving the Anthropocene: How will humanity look back on itself?”. What topics did you discuss?

A: The talk was the thought experiment of a geologist, and geologists normally think about the distant past. Let’s imagine we are geologists who—10 million years in the future—are looking back on today: What will we have left behind, and what will have changed the planet to provide evidence on how we lived?

There are, for instance, chemical signatures such as plutonium that we created through nuclear fission in atom bomb testing and in reactors. Another big change is that 96% of all mammals on Earth today are humans or livestock, while a huge number of organisms already do not or will no longer exist after our time in what constitutes the sixth mass extinction on Earth. There are other examples, such as of nitrogen, which we suck out of the air and put into the soil as fertilisers, ending up in the oceans.

The idea behind the talk was to give an overview of what is happening on the planet beyond the increase in CO2. We are changing the ecosystem so significantly and the system is so complicated that it’s very difficult to predict all the consequences.

Q: As Dean of the College of Science, which areas of science would you like to include in NTU’s research spectrum?

A: We are currently carrying out strategic reviews across all schools in the College of Science—the Asian School of the Environment, School of Biological Sciences and School of Physical and Mathematical Sciences—which will reveal the priorities of the faculty.

Among the gaps already identified that I hope to address is atmospheric science. Studying the atmosphere is pretty important in a world that is undergoing rapid changes in its atmosphere, and in a city where people’s health depends on what they are breathing. Atmospheric science is a unifying topic that bridges chemistry and environmental science and physics and health.

Q: How can the College of Science further its societal impact?

A: NTU has identified some big challenges for humanity that are not unique to Singapore, including societal issues like healthy ageing, which are already addressed by some of the College’s schools. Science provides an understanding of the problems to help design the solutions.

In the College of Science, we need to work closely with colleagues in engineering and medicine to guide the solutions that engineers or people in medicine can provide. By emphasising multidisciplinarity, I hope to build networks of academic excellence across fields to generate greater societal impact, for instance, by helping policymakers to recognise solutions and implement them.

Q: What research projects are you working on in NTU?

A: I’m just starting up with a small group. Mineralogists are environmental materials scientists, and so I called my lab Environmental Materials.

I have two main research projects. In the first project, we are looking at the materials that make up a planet. By studying the chemical and physical conditions deep inside the planet—such as high pressures and temperatures— we aim to apply this understanding to manufactured materials to explore how the physics and chemistry of materials change under extreme conditions of pressure and temperature.

In the second project, we use mineralogy to try to accelerate the slow carbon cycle—the capture of CO2 from the atmosphere into minerals. In particular, we look at how organisms make carbonate and how these mechanisms can potentially be used to remove CO2 from the system. We also work with mining companies and cement factories on ways to capture atmospheric CO2 by binding it to crushed rocks or to reduce CO2 emissions through the production of biocement.

Q: As a former British Science Association Science Media Fellow at the British Broadcasting Corporation (BBC), what is your take on the role of science communication in driving positive changes in environmental issues?

A: I think science communication is really important. My six-week journalistic stint in BBC in the summer of 2013 opened my eyes to the kind of information journalists, who are typically not scientifically trained, need from scientists, and to the necessity to communicate your ideas as a scientist in ways that are accessible.

Scientists have obligations to explain what they do. For one, we are publicly funded and thus have a responsibility to explain what we are doing. Secondly, we need to transfer our understanding of important things that are happening in the world, for example, the currently ongoing sixth mass extinction, to the public in appropriate ways to help change behaviours.

Q: What made you decide to move to Singapore? What unique opportunities did you see here?

A: Having lived and worked in Cambridge in the UK for over 30 years, I wanted to do something different before retirement. Singapore had always been in the back of my mind because I lived here as an infant in 1963 and I grew up seeing photos from that time. So, coming back to Singapore was a life choice for me.

Unlike Cambridge University, NTU is very young and nimble; like Cambridge, NTU is very research-intensive. It has links not only with East Asia and South Asia, but also with Europe and North America, and it is located in the tropics close to the equator. Singapore is therefore in a very interesting geographical position that makes it unique among global research-intensive universities.

Last but not least, NTU has the Earth Observatory of Singapore and other nationally funded Research Centres of Excellence. It has good people and resources, it is strong in engineering, and it provides fantastic collaborative opportunities. Equally important, Singapore strongly supports science and engineering, and has a government that values research work and works closely with its universities.

On the shoulders of pioneers: Asst Prof Aron Meltzner