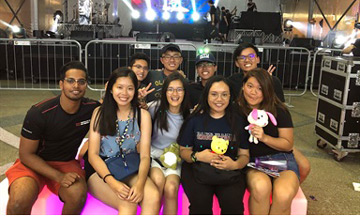 NTU EEE graduand Shawn Berqmans Pereira graduates with a Bachelor of Engineering in Electrical and Electronic Engineering. He reflects on this time in EEE, participating in camps and activities gave him a sense of belonging.
Shawn was a direct year 2 student, coming from a polytechnic and just finished his National Service. Being a direct year 2 student in EEE was not easy, having an extensive number of modules in EEE. But he never felt lost in EEE as he was always supported by Professors and peers alike in EEE. Shawn also likes that there was also plenty of opportunities given in EEE to upgrade one’s skill through internships and exchanges overseas.
There were plenty of activities organised by EEE but Shawn would highlight a few activities like Effinity camp and Innovation challenge that were his favourites. Those were the key events that introduced him to EEE and made him feel at home.
One of Shawn’s memorable experiences as an NTU EEE student is doing his internship in India which taught him a different work culture and to grow his ability to work independently. It also allowed him to use whatever he learnt in modules from EEE in his work environment.
Another experience would be the study sessions hosted by peers during every semester in preparation for final exams. Through these sessions, Shawn was able to further widen his understanding of his modules and perform well for the examinations.
Some of Shawn’s greatest achievements in NTU EEE would be obtaining a first place for his design innovation project and obtaining merit for my internship. It was a moment full of pride and a personal triumph.
His favourite module in EEE would be Artificial Intelligence and Data Mining which introduced him to the world of AI. He also expresses gratitude to Prof Tang Dingyuan who was extensively supportive throughout his final year project.