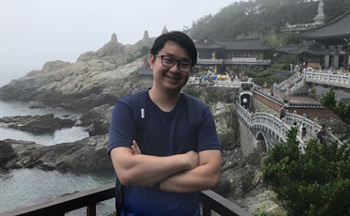 Prawira Genestonlia graduated with a double degree in Bachelor of Engineering (Electrical & Electronic Engineering) with Honours (Distinction) and Bachelor of Arts in Economics with Honours (Distinction). He is also the recipient of the EEE Excellence Award and shares with us his experience in NTU EEE.
Prawira truly enjoyed the vibrant student life that EEE had to offer. Being the largest engineering school in NTU, EEE offers many student bodies and activities. That meant Prawira had many opportunities to be involved in many things outside the classroom. For example, Makerspace, where he and his team organised a special freshman orientation program that involved technology. The team in charge designed a few technology-enabled escape rooms using maker tools such as Arduino and Raspberry Pi.
Prawira also liked the versatility that EEE provides. He joined EEE with the mindset to learn clean energy in depth and specialise in clean energy power systems. However, as he went through his undergraduate program, he realised that he prefered to specialise in software engineering. The school allowed him to take software modules in year 3 and 4 as compulsory technical electives. He loved this versatility as he was guaranteed to learn what he enjoyed through his specialisation.
As he was involved in numerous student bodies, Prawira had the opportunity to travel overseas with his fellow undergraduates. He loved being part of the Overseas Community Involvement Project in Chiang Mai, Thailand as well as the technological study trip to Silicon Valley in the U.S. During the OCIP trip, he was involved in the installation of circuit breakers for the local villagers. It was memorable as he experienced first-hand what it was like to install an electrical system from power grid to electronics such as fan. This allowed him to gain a deeper understanding of the practicality of his degree.
On top of the academic workload, Prawira participated in numerous industry hackathons where he put his NTU EEE knowledge into practice. Some of his greatest achievements were excelling in hackathons, like the ones organised by JTC, DBS and Facebook.
One of his favourite modules was Design and Innovation Project. DIP allowed Prawira to put theoretical knowledge that he learned into practice and eventually he developed a product. His favourite prof is Dr Michelle Shao, someone he felt was very dedicated to the job. She was also his FYP supervisor and with her guidance, Prawira was able to develop a working progressive web application.