We are living in unprecedented times. The environment is under strain from the growing demand for natural resources combined with increased waste and carbon emissions, while infectious disease outbreaks threaten the lives and livelihoods of societies. For humanity to live sustainably now and in the future, these challenges need to be mitigated through advances in research and innovation.

From food delivery robots to rapid COVID-19 breathalyser tests, read and watch how NTU is taking the lead in turning bright ideas into real-world solutions. 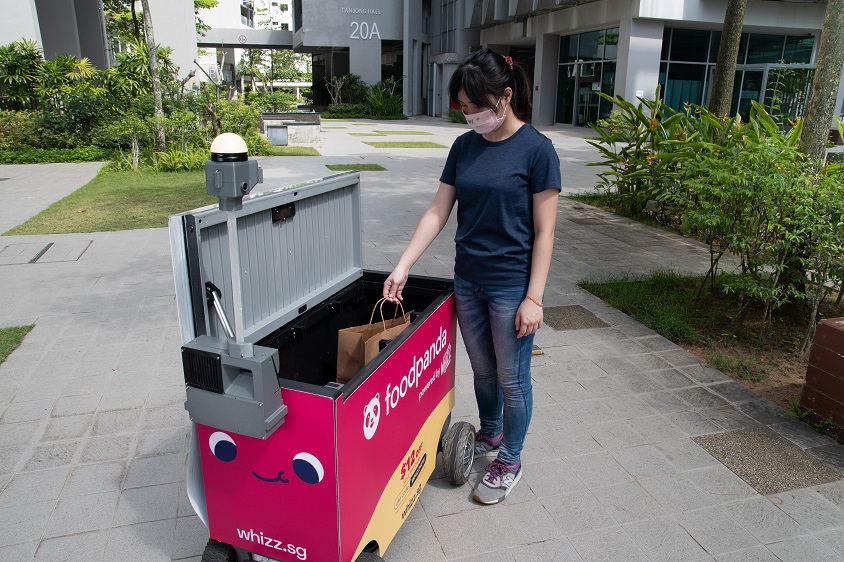 In collaboration with food delivery platforms, a fleet of NTU-created FoodBots has delivered over 12,000 meals on the NTU campus and nearby eco-business parks. Credit: NTU.

On the roads and pavements of NTU’s Smart Campus, you may see several self-driving NTU innovations whizzing along. FoodBots, created by NTU student startup Whizz Mobility, serve up lunch and dinner orders on the NTU campus. Programmed to travel on paths autonomously and controlled by a backend operator to accept orders, the semi-autonomous robots function as delivery drivers. Merchants load food and other items into the robot and the user unlocks the hatch to retrieve their order when the robot arrives at its destination.

NTU has also developed the world’s first full-sized autonomous electric bus in collaboration with Volvo Buses. Operating quietly with zero emissions, the bus requires 80% less energy than an equivalent-sized diesel bus. The vehicle has undergone rigorous testing at the Centre of Excellence for Testing & Research of Autonomous Vehicles-NTU and has been trialled on designated routes in the NTU campus, with plans to extend its route beyond NTU. Quieter and generating less pollution than fossil fuel-powered vehicles, the autonomous electric bus has the potential to enhance the efficiency of public transport. Credit: NTU.

Scan to watch how sustainable autonomous technology developed at NTU is shaping the future of transportation. 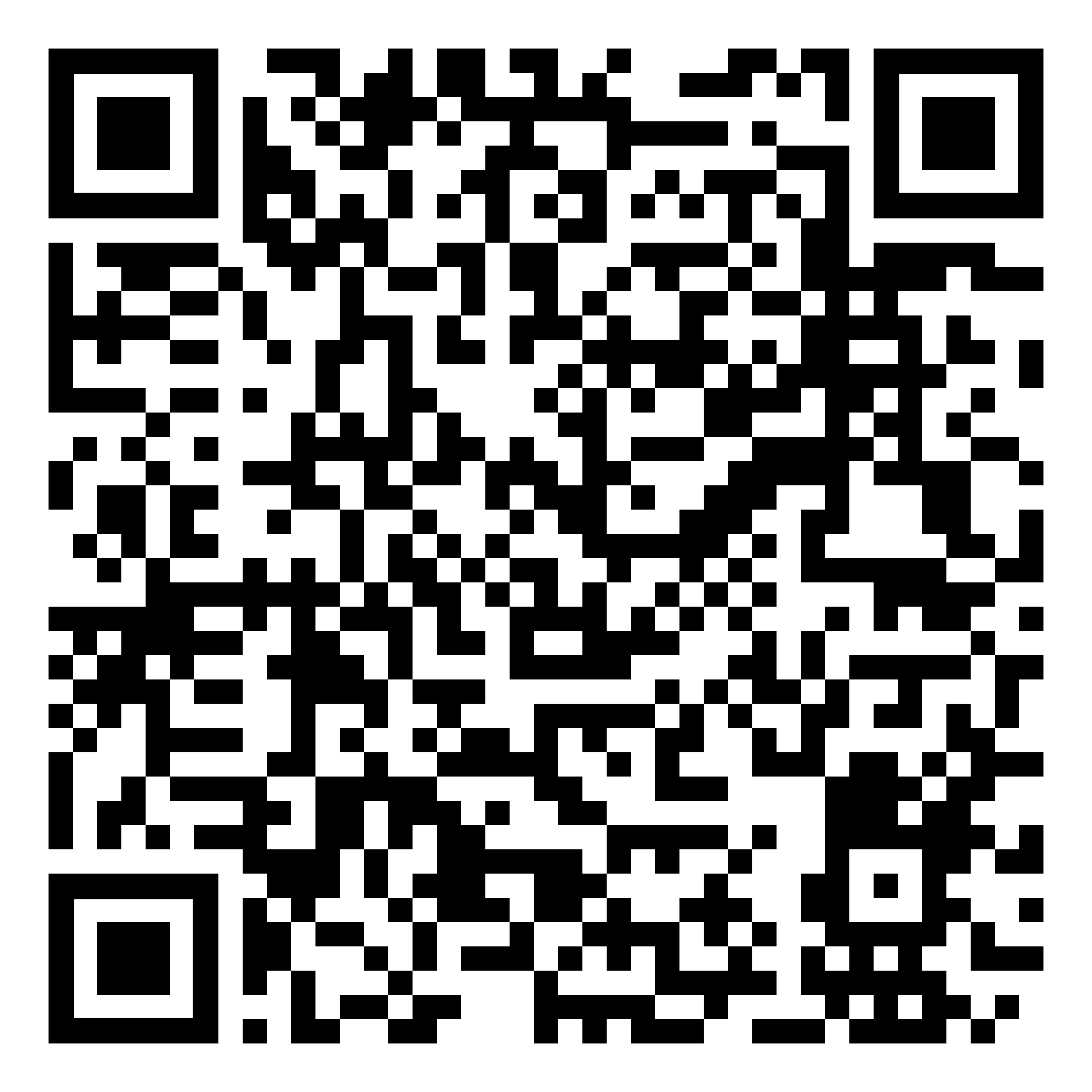 At NTU, the saying “one man’s trash is another man’s treasure” is more than a figure of speech.

Food scientists at NTU have developed an eco-friendly method of obtaining a natural biopolymer called chitosan from prawn shells by fermenting them with fruit waste. The chitosan can then be turned into biodegradable food-grade packaging that could potentially replace plastic containers used for food takeaways. The researchers have also repurposed soybean residue for use in the alternative protein industry and made antibacterial bandages from discarded durian husks (read more about NTU’s efforts to reduce food waste on page 15). 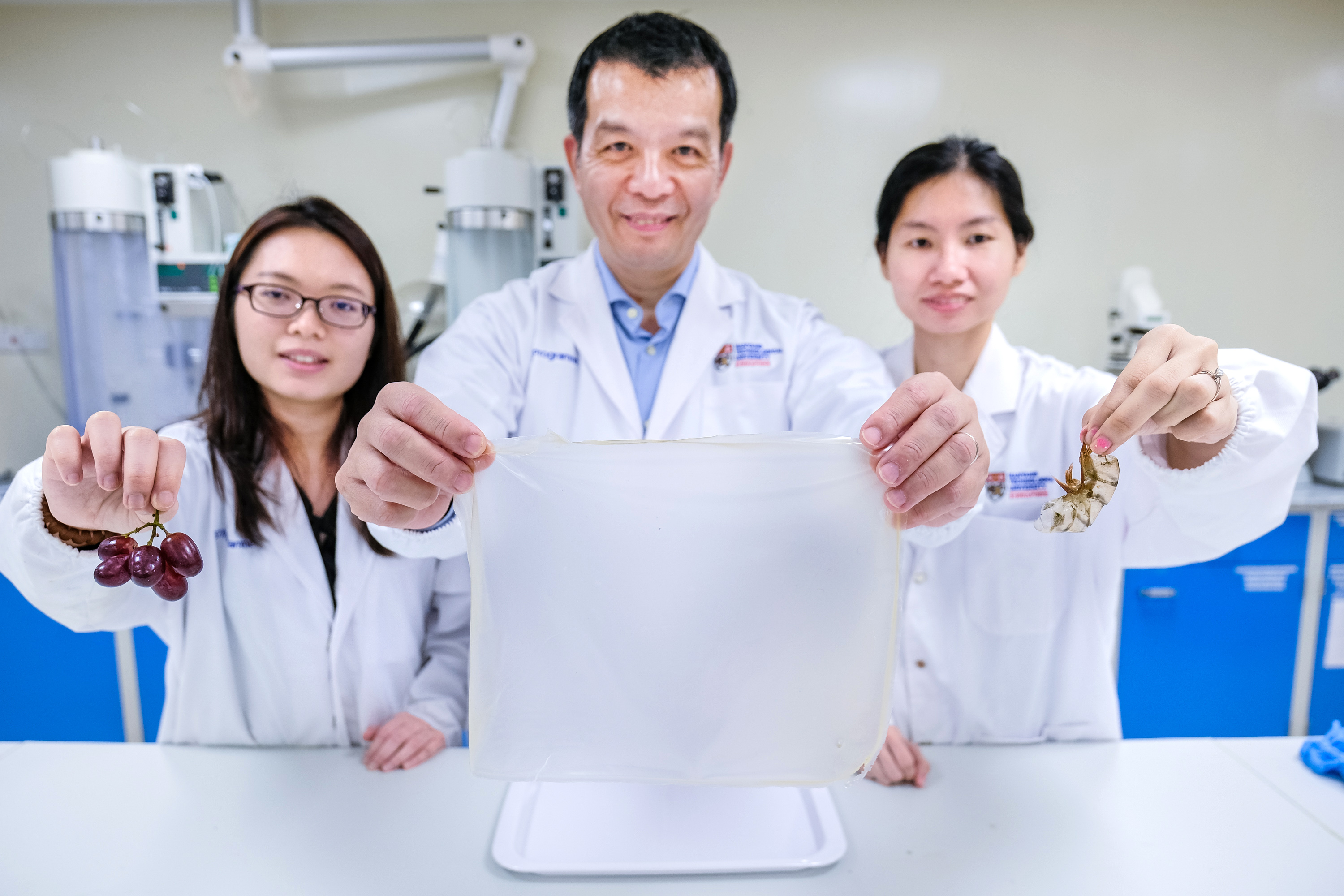 Elsewhere, NTU scientists have developed a novel method of treating spent lithium-ion batteries: using discarded fruit peels to extract and reuse precious metals from depleted batteries in order to create new batteries. By tackling both food waste and electronic waste at the same time, this waste-to-resource approach supports the development of a circular economy with zero waste generation.

Jointly developed by the National Environment Agency in Singapore and NTU’s Nanyang Environment and Water Research Institute and supported by the Singapore Economic Development Board, the Waste-to-Energy Research Facility is a unique waste treatment facility that turns solid waste into resources, thus taking some of the load off Singapore’s limited landfills. The waste treatment process produces slag – a glass-like material that can be used to make a construction material known as NEWSand. As the facility treats waste at much higher temperatures than typical incinerators, less ash is produced and discarded.

Scan to watch how research at NTU is giving waste a second lease of life. 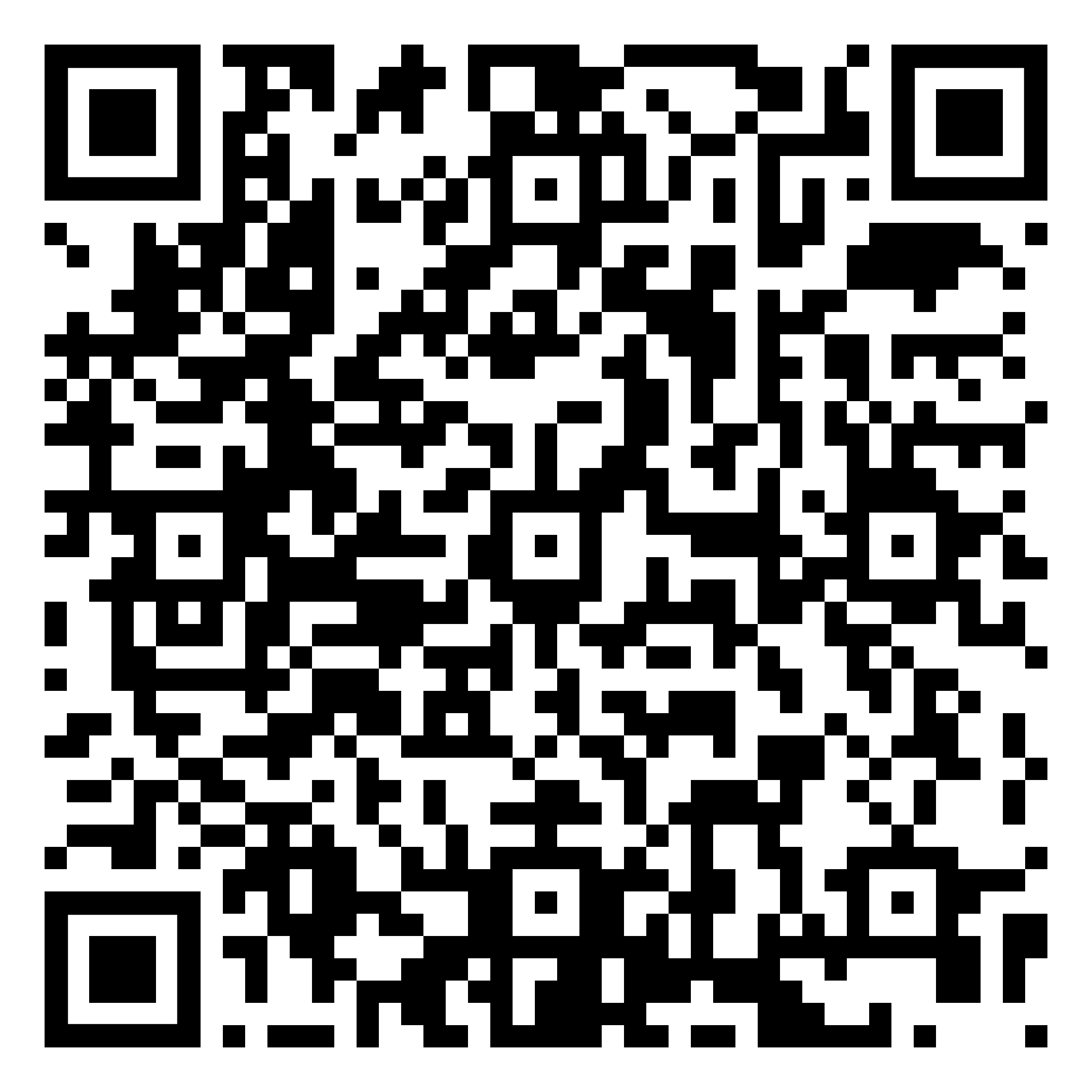 Amidst the ongoing COVID-19 pandemic, NTU scientists have answered the call to develop tools that help prevent

the infection from spreading. 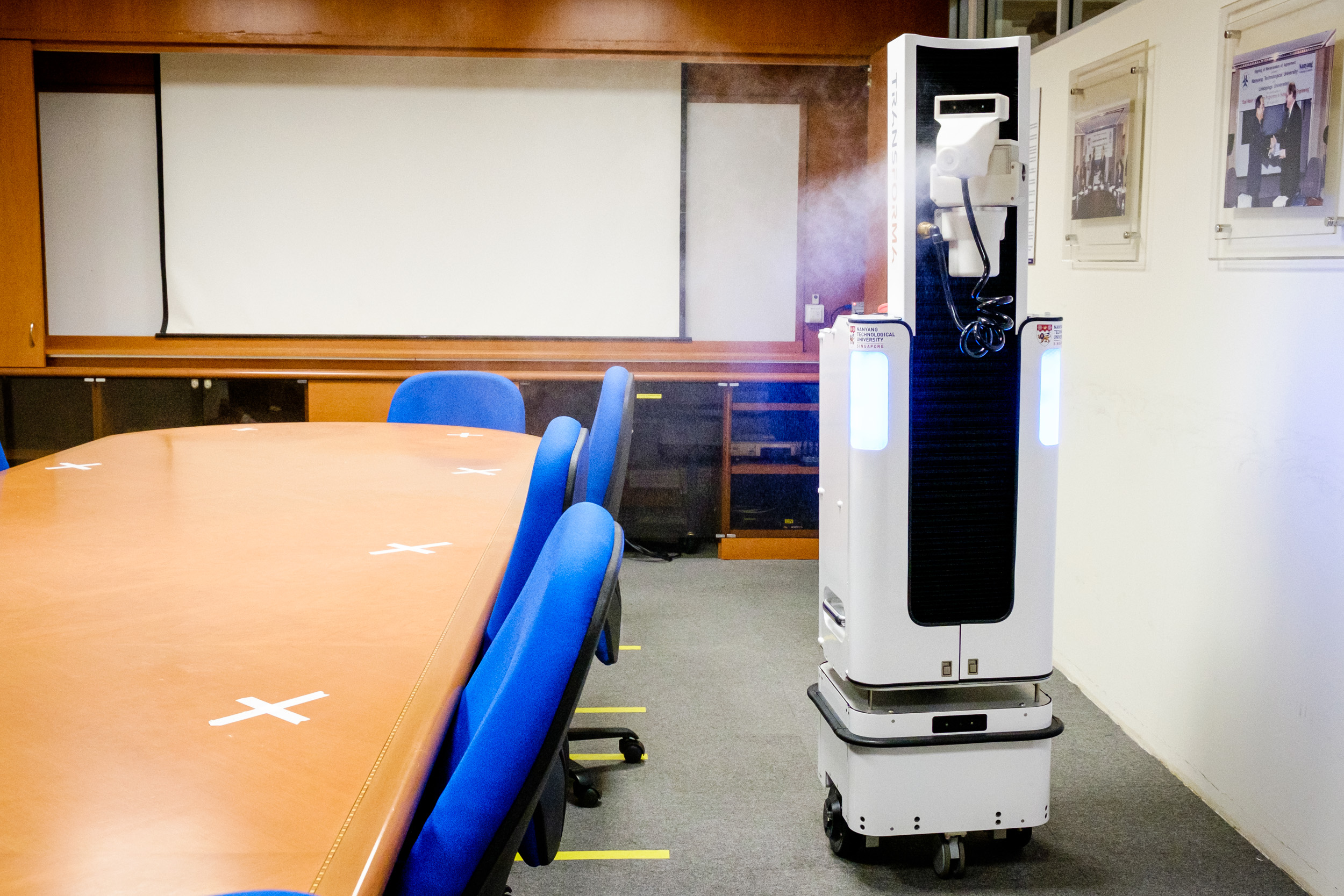 Thanks to its ability to disinfect large areas quickly, the semiautonomous XDBOT reduces the need for manpower to perform this labour-intensive and repetitive task. Credit: NTU.

To speed up mass COVID-19 screening, NTU scientists have invented a fast and accurate breathalyser test called TracieX that works in two minutes. TracieX has been commercialised by Silver Factory Technology, an NTU spinoff company founded by the team that developed the test, and has been approved for use in Singapore. The team hopes that it will soon be used at events to screenfor COVID-19 infections.

The frequent disinfection of public areas is another important strategy to stop further spread of the SARS-CoV-2 virus that causes COVID-19. The eXtreme Disinfection roBOT (XDBOT) developed by NTU researchers sprays disinfectant on hard-to-reach places, eliminating the need for cleaners to be in contact with surfaces and reducing the risk of picking up the virus from contaminated areas. XDBOT has been commercialised by NTU startup Transforma Robotics and is being used to disinfect healthcare and public facilities in Singapore and the US.

Scan to see how NTU’s inventions are combatting COVID-19.