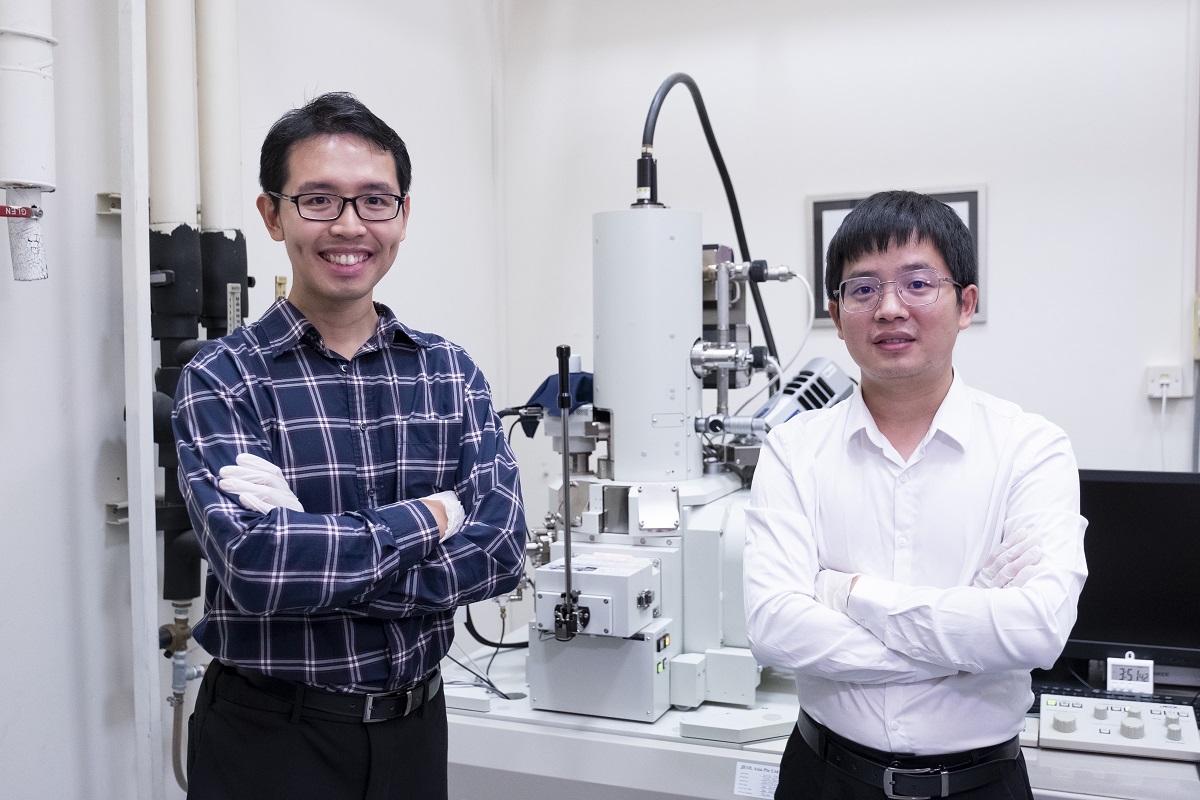 For the first time since it was proposed over 80 years ago, scientists from Nanyang Technological University, Singapore (NTU Singapore) have demonstrated the phenomenon of “quantum recoil”, which describes how the particle nature of light has a major impact on electrons moving through materials. The research is published online today in the journal Nature Photonics.

Quantum recoil was theorised by Russian physicist and Nobel laureate Vitaly Ginzburg in 1940 to accurately account for radiation emitted when charged particles like electrons move through a medium, such as water, or materials with repeated patterns on the surface, including those on butterfly wings and graphite.

This radiation is created when the moving electrons disturb atoms in the medium or the material. As the atoms return to an undisturbed state, they emit radiation, such as X-rays.

Although the electrons are supposed to lose energy and slow down when this happens, classical theory predicts that its impact on the emitted radiation is negligible.

However, Ginzburg posited that this assumption breaks down when considering the quantum electrodynamics theory that deals with how charged particles interact with an electromagnetic field, as well as how light interacts with matter.

The transfer causes the energies of the radiation released to shift from classical predictions and also affects the slowing electrons by causing them to deviate from their path of travel.

This phenomenon is known as quantum recoil. However, no one has been able to experimentally prove it – until now.

The Singapore scientists, led by Nanyang Assistant Professor Wong Liang Jie from NTU’s School of Electrical and Electronic Engineering, demonstrated the phenomenon through separate experiments that bombarded electrons from a scanning electron microscope onto two very thin materials, about 1,000 times thinner than a strand of hair.

The two materials were boron nitride in a hexagonal form often used as a lubricant in paints, and graphite which is used to make rechargeable battery terminals and also found in pencil lead.

Using an energy dispersive X-ray spectrometer detector, the researchers measured the X-rays emitted from this bombardment and found that they had energies that were different from those predicted by classical theory but could instead be explained by quantum recoil.

The researchers said that the quantum recoil effect could be much larger under certain conditions, such as when the materials bombarded by the electrons are tilted or if the direction from which the X-rays are observed is changed.

Their calculations suggest that if an emitted X-ray with a classically predicted energy of around 300 eV is observed in a few specific directions, the measured energy could drop to almost zero due to quantum recoil, although further research is needed to confirm this.

Scientists have been trying to conduct experiments for years to prove quantum recoil but have hit various snags.

One reason is that, in theory, to produce the effect at a level that is measurable, the materials that the electrons hit need to have tiny groove-like surface patterns repeated at very high intervals. It means that the distance between patterns needs to be less than 1 nanometre (nm), which is hundreds of thousands of times smaller than the diameter of a strand of hair.

Researchers have been trying to create these small patterns artificially with nanofabrication methods, such as those using laser beams. However, these methods have so far been able to create patterns with a distance of around 10 nm between them, which Asst Prof Wong said is already a huge achievement.

But he and his team made a paradigm shift that helped them bypass the current fabrication limitations – they used existing materials that naturally have such minute patterns.

The NTU scientists’ photonics research experience in X-rays played a big role in this, said Asst Prof Wong. Because they deal with X-rays that have wavelengths ranging between 0.01 nm and 10 nm, he and his colleagues constantly think about performing experiments at such scales, which coincides with the requirements for proving quantum recoil.

This led them to experiment with boron nitride and graphite as the researchers knew that these two materials are made of atoms in very regular arrangements. In particular, they consist of many ultra-thin layers each just one atom thick that form naturally occurring groove-like patterns repeating at intervals of less than 1 nm, the amount required to demonstrate quantum recoil in a measurable way. Their experimental results proved that they were right.

Professor Peter Baum from Germany’s University of Konstanz, who was not involved in the study but reviewed the research paper, said that the findings of the Singapore scientists are fundamentally significant.

"This work illuminates a so far unknown regime where free electrons interact with free photons with the help of a crystal," said Prof Baum, whose research focuses on the interaction of light and matter at the atomic scale.

He was referring to crystalline materials whose atoms are arranged in highly ordered and repeated patterns. They include the hexagonal boron nitride and graphite tested in the NTU experiments. The quantum recoil findings can be used to improve X-ray imaging applications. For instance, the NTU scientists have filed a patent based on the recoil results and earlier research on producing X-rays by using inorganic compounds about the size of computer chips exposed to moving electrons.

The patent indicates an approach to making smaller table-top sized machines that can be cheaper and tuned to produce specific X-ray energies accurately. It contrasts with the current, and few, tuneable X-ray machine facilities that can range in size from a bungalow house around 15,000 sq ft to a few soccer fields spanning more than 130,000 sq ft.

Tuneable X-ray machines would give biomedical imaging a significant boost. Typically in healthcare settings, X-rays are produced over a wide energy range for general imaging applications. But with a tuneable X-ray machine, a narrow range of X-ray energy can be generated. This ability to tune the X-ray source to a specific narrow range of energies opens up a new area of biomedical imaging applications.

Said Dr Edward Morton, the Chief Technology Officer of Singapore medical diagnostics equipment manufacturer CTmetrix which did not participate in the research: “By using different X-rays tuned to specific energies to probe the atomic composition of materials, we can gain new insight into the structure of cells in tissue samples.”

Such X-rays need to be generated accurately, as each X-ray energy is used to identify a different and specific human tissue in X-ray imaging.

If the X-ray generated and used is not of the correct energy because quantum recoil was not considered, the tissues being analysed may be incorrectly identified.

CTmetrix has applied to use the NTU patent to develop more compact and precise tuneable X-ray machines for the biomedical imaging of human tissue samples. The company is aiming to have a prototype ready by the end of 2023.

“We see the market for tuneable X-ray sources to be in medical diagnostics of tissue samples taken from patients, for the rapid analysis of a tumour or other biological materials. In this way, tuneable X-ray sources can help medical diagnosis be more accurate, with immediate analysis even within the operating theatre,” said Dr Morton, referring to the small size of the X-ray machines that could be achieved through exploitation of the NTU patent.

“This has great potential for improving clinical diagnosis and patient outcomes,” he added.

Another Singapore company interested in the patent is Component Technology, which provides visual inspection solutions for the semiconductor industry and was not directly involved in the research. The firm is looking to develop tuneable X-ray inspection machines to check different layers of semiconductor chips for defects. These include voids, which are bubbles of trapped air, that can lead to chip failure.

“We need X-rays of specific energies to interpret the inspection results accurately. If the X-rays’ energies are wrong, we might be making incorrect assessments on chip defects,” said Mr Chung.

Future research the NTU scientists are planning include studying the impact of quantum recoil in other types of interactions between light and matter, as well as using the recoil to design more efficient and compact sources of generating tuneable X-rays.

The researchers also plan to further study situations under which quantum recoil can be potentially so huge that classically predicted X-rays are emitted instead as visible light or even microwaves.

“This would be of great interest as quantum effects, especially those that are huge, are seldom observable in the absence of extreme conditions, such as intense lasers,” said Asst Prof Wong.

Details of the study can be found in “Quantum recoil in free-electron interactions with atomic lattices” in Nature Photonics (2023).

Counting on carbon to power the world