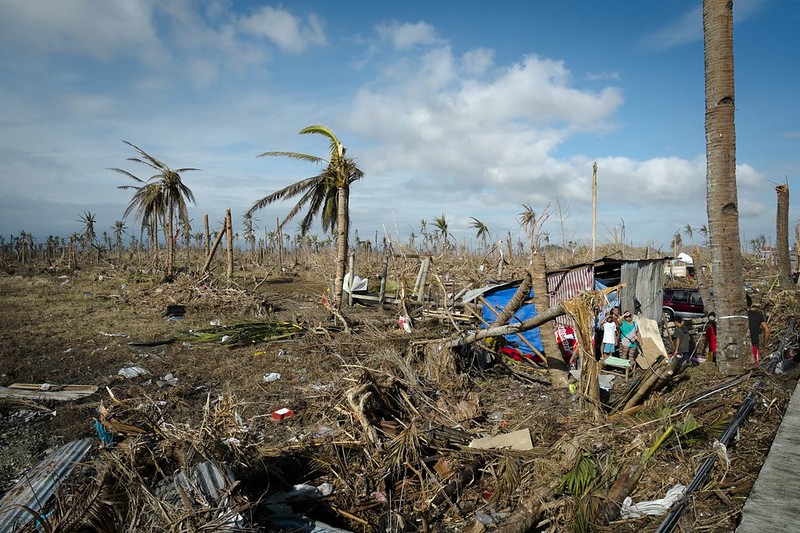 Natural hazards cause immensurable loss of life and damage to property so knowing the extent of damage helps emergency responders provide aid to those affected. Image credit: UNHCR/R. Rocamora.

In the last twenty years, natural disasters have claimed approximately 1.23 million lives –averaging about 60,000 per year – and have affected more than 4 billion people around the world. Natural hazards also caused approximately US$ 2.97 trillion in economic losses worldwide.

In 2018, through collaboration with the California Institute of Technology (Caltech) and NASA Jet Propulsion Laboratory (JPL), the Advanced Rapid Imaging and Analysis (ARIA) system developed by the two agencies was established at NTU’s Earth Observatory Singapore (EOS). The aim is to map the damage caused by natural disasters in the Asia-Pacific (APAC) region, one of the most disaster-prone areas in the world.

Known as the ARIA-SG system, it uses satellite technology to obtain information about the destruction caused by natural disasters and helps emergency responders visualise the extent of damage, allowing them to provide aid to the right place at the right time.

The ARIA-SG system can map the damage caused by a variety of natural disasters including floods, typhoons, earthquakes and volcanic eruptions within a day. 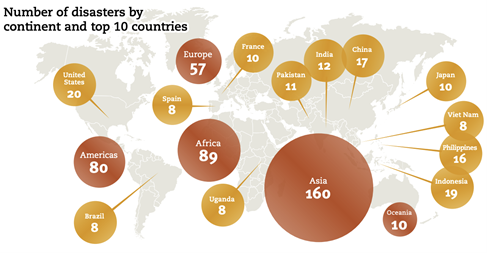 According to the Centre for Research on the Epidemiology of Disasters (CRED), the highest number of natural disasters occurred in Asia, accounting for 40% of the total number of cases worldwide in 2019. More than half of the top 10 countries in the world ranked by number of disasters were in the APAC region. Image credit: https://cred.be/sites/default/files/adsr_2019.pdf.

Responding to a disaster

EOS receives disaster-mapping requests from agencies such as the ASEAN Coordinating Centre for Humanitarian Assistance on disaster management (AHA Centre), an organisation that facilitates emergency responses to disasters in the ASEAN region.

“In the immediate aftermath of a disaster, disaster management stakeholders require far-reaching yet precise information about its impact for planning and allocating resources, search and rescue activity, setting up of relief shelters, and disseminating medical and food supplies. Responding quickly is key as delays may result in more deaths and casualties,” said Assoc Prof Emma Hill, Principal Investigator of the ARIA-SG project and Director of Research and Strategy at EOS.

“However, it may be difficult to coordinate and gather information quickly when communication networks and transport infrastructure are disrupted or damaged. This is where the ARIA-SG SAR mapping can be helpful, as it provides timely observations day and night, regardless of weather conditions.”

The ARIA-SG system obtain information from satellites that orbit the earth which are fitted with a type of sensor known as synthetic aperture radar (SAR). These SAR sensors actively emit microwaves which reflect off objects on the surface of the Earth. The reflected waves are then recorded by the sensor.

As features such as buildings, vegetation and water reflect microwaves differently, detailed maps of the surface of the Earth can be constructed by analysing the scattered waves that are reflected back to the satellites.

Leveraging the powerful capabilities of cloud computing, the ARIA-SG system automatically processes data collected by the sensors, enabling the scale and intensity of destruction caused by natural disasters to be visualised rapidly once a satellite captures the data. 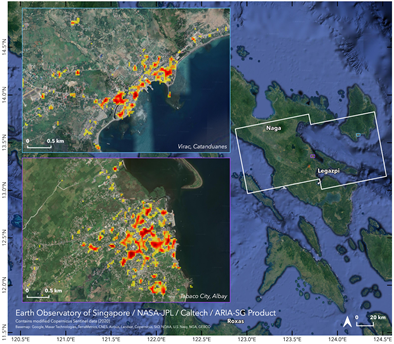 An impact map showing the areas that were damaged, represented by bright pixels, by Typhoon Goni which struck the Philippines in October 2020. Image credit: EOS and NASA-JPL.

By comparing maps before and after the disaster, the ARIA-SG system can identify the nature and extent of damage caused by the natural disaster, such as flooded areas, destroyed infrastructure or collapsed buildings. This information helps disaster response agencies make critical decisions which could save many lives.

Helping to save lives in the aftermath of natural calamities

Using the ARIA-SG system, EOS has responded to more than 28 requests to map the aftermath of natural disasters in APAC between 2018 and 2020.

ARIA-SG was used to map the damage caused by Super Typhoon Goni, an extremely powerful cyclone that struck the Philippines on 31 October 2020. The damage map of Super Typhoon Goni was used by the AHA Centre to estimate the number of people and homes affected by the disaster.

Likewise, the impact maps generated during the floods that ravaged Laos in September 2019 were used to help emergency responders distribute much-needed supplies such as kitchen and personal hygiene items and mosquito nets quickly to the roughly 100,000 people who were affected.

“The ARIA-SG system was founded on the vision to mitigate the loss of life from natural disasters in Asia and we are heartened that our maps have been useful to those working so hard to save lives following disasters,” said Prof Hill.

“We foresee that mapping of the impacts of natural disasters in Asia will become increasingly important as climate change, population growth and urbanisation are contributing to an increase in the number and severity of disasters in the region.”

“As the SAR technology and algorithms advance, our ability to monitor the impacts of natural disasters will improve and we will be able to save even more lives in the future.”

Transforming the future of industry