Demand for wearable gadgets such as smart watches and fitness trackers climbed sharply during the COVID-19 pandemic, as consumers became more health conscious and took up new forms of exercise.

Global shipments of wearables hit nearly 534 million in 2021, up 20 per cent from the year before, according to market research firm IDC.

But the batteries in wearables pose challenges for consumers. They may not last that long – the Apple Watch lasts about 18 hours after an overnight charge, for example – and they limit how thin devices can become. When wearables reach the end of their lives, disposing of them poses environmental issues too.

These challenges are addressed with three developments by researchers from Nanyang Technological University, Singapore (NTU Singapore) that aim to charge wearable gadgets on the go, and make their batteries thinner and greener.

Sweat it, bend it

All wearables eventually need their batteries to be recharged. Two prototypes developed by NTU Singapore scientists seek a different answer to this challenge by charging gadgets when they are in use, through physical activity.

The first is a thin, fabric-like battery that turns an exercising person’s sweat into a way of charging wearable devices. Tests have shown that four of the sweat-fuelled batteries around the wrist of a cyclist were able to generate enough power for a commercial wearable temperature sensor to send data to a smartphone through Bluetooth. The results were published in the Science Advances journal in July 2021. Each 2cm by 2cm battery, the size of a small postage stamp, was made by printing ink containing silver flakes onto a flexible, sweat-absorbent fabric.

When sweat meets the battery, the chloride ions and acidity of sweat cause the battery’s silver flakes to clump together and conduct electricity.

Professor Lee Pooi See, the President’s Chair Professor of Materials Science and Engineering in NTU Singapore, who led the team developing it, observed that the battery is more flexible and deformable than current technology. “We showed it could withstand the strain from a wearer’s daily activities and repeated exposure to stress or sweat,” she said.

A different approach has been taken by another team under Prof Lee, who have shown that body movements, like those from exercising and walking, can power a stretchable energy device. 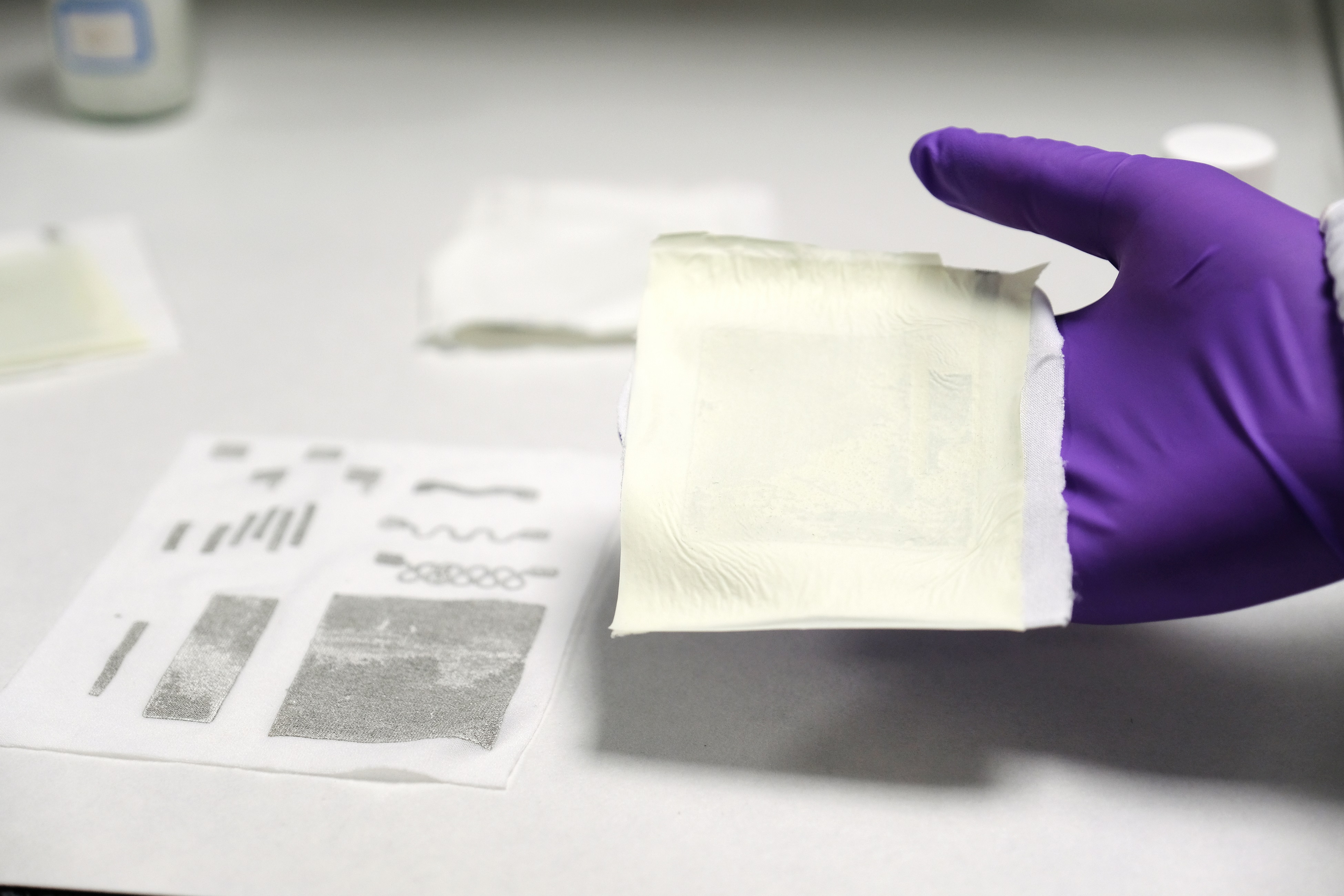 The stretchable fabric-like energy harvester that can generate power when stretched or squeezed. Credit: NTU Singapore.

The researchers found that tapping on a 3cm by 4cm sample of the fabric produced enough power to light up 100 LEDs. The research was published in the Advanced Materials journal in April 2022.

The sweat-powered and the stretch-powered energy devices are between five and 200 times slimmer than traditional button batteries, holding promise for future wearables with sleeker designs.

The sweat-powered battery is slightly thicker than a postage stamp at 0.2mm, while the stretch-powered energy harvester comes in at just 0.024mm, thinner than a strand of hair.

A third new energy device developed by NTU Singapore researchers is a 0.4mm thick rechargeable battery made of paper. 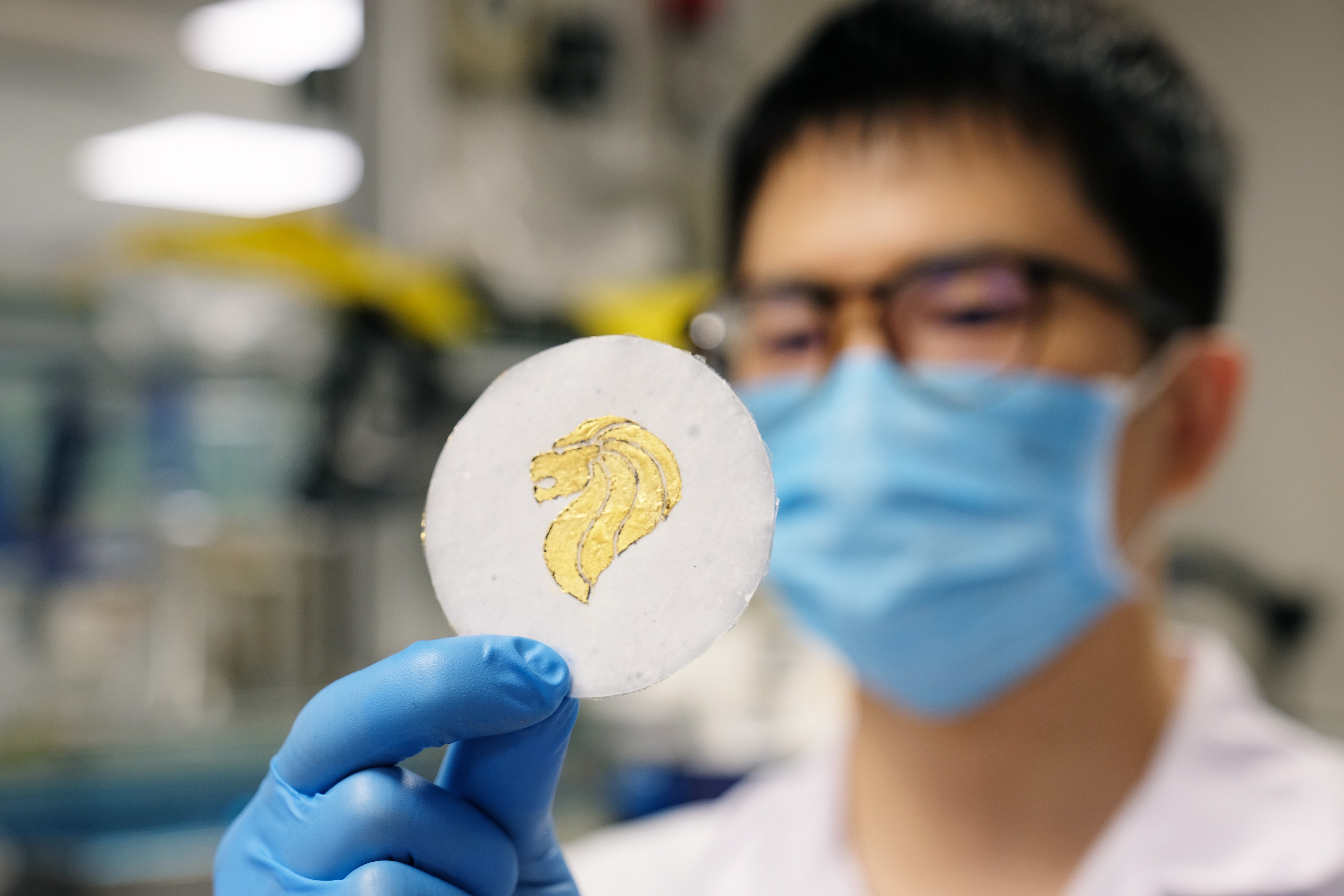 In tests, a 4cm by 4cm prototype of this battery powered a small electric fan for 45 minutes. Even when the paper battery was bent, twisted or cut, its supply of power was not interrupted. The findings were published in the Advanced Science journal in November 2021.

The battery comprises a layer of zinc and conductive carbon printed on one side of a piece of reinforced paper, and a layer of manganese or nickel printed on the other.

Professor Fan Hongjin, from the University’s School of Physical and Mathematical Sciences and a co-leader of the research, believes that the battery’s features, such as not losing performance even when cut, “make it ideal for integration in the sorts of flexible electronics that are gradually being developed.”

The paper battery also has the promise of being greener than a traditional battery as it is biodegradable.

The developer’s co-lead, Assistant Professor Lee Seok Woo from NTU Singapore’s School of Electrical and Electronic Engineering, said their battery could potentially help with the electronic waste problem, since “our printed paper battery is non-toxic and does not require aluminium or plastic casings to encapsulate the battery components.” 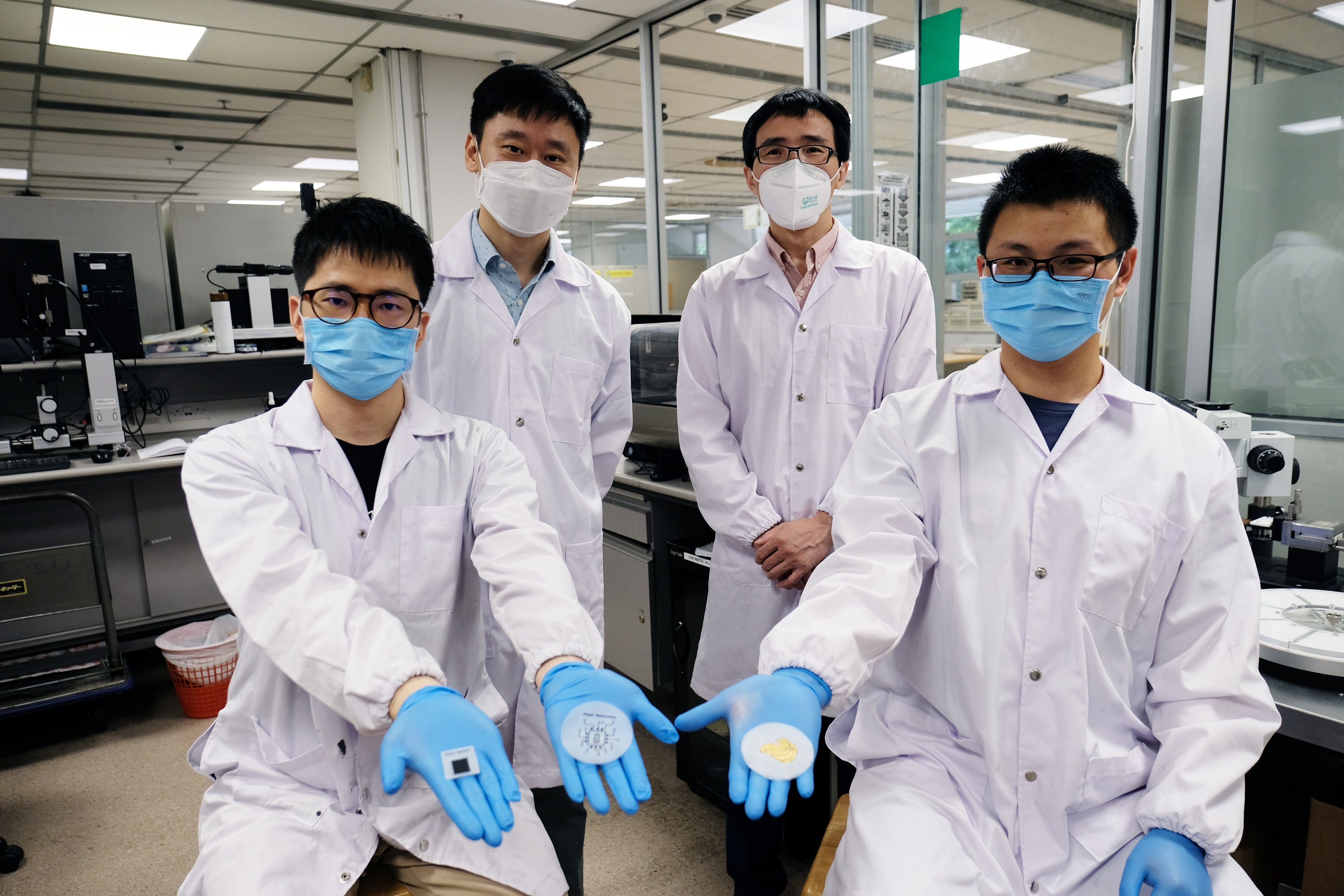 Some of the materials used to make the paper battery, such as cellulose, can be naturally decomposed by microbes, while metal components exist in forms that are not toxic or are close to those that are naturally occurring.

This means a used-up paper battery can be buried in the soil and break down within a month.

The University’s sweat- and movement-powered energy devices are also made with environmentally friendly materials.

Neither devices contain any heavy metals or highly toxic chemicals, unlike conventional batteries. The movement device also uses a greener form of a compound called perovskite, which can be used to convert solar energy into electricity. While perovskite often contains the toxic element lead, the version the researchers use in their battery is lead-free.