The past decade of technological innovations has given us everything from electric vehicles to next-generation computing applications. Just around the corner, new components such as highly sensitive sensors and ultrathin lasers will revolutionise the capabilities of these electronic applications and elevate their performance to the next level.

This wave of electronic applications has also driven the world’s appetite for energy to new highs. According to a recent report by the International Energy Agency, the global electricity demand in 2021 is expected to grow by 5 per cent.

With this increased demand in energy comes a growing demand for storage devices that can store large amounts of energy to power these inventions.

To address these issues, NTU scientists are turning to materials made from carbon, otherwise known as carbon allotropes.

Thanks to their unique properties, carbon-based materials such as diamond, carbon nanosheets, carbon nanotubes and graphene, have the potential to fuel the development of the electrical components and high-capacity energy storage devices of tomorrow.

Such research illustrates the University’s commitment to its NTU2025 plan which seeks to address some of humanity’s grand challenges, one of which is addressing technology’s impact on humanity.

Strong bonds between the carbon atoms in diamond make it the hardest naturally occurring substance in the world. While bulk diamond, being a non-conductor of electricity, may not be the first material that comes to mind for electronic applications, NTU scientists have discovered that they can engineer nanometre-sized diamond so that it is suitable for power electronics ranging from highly sensitive sensors to highly efficient light emitting diodes (LEDs).

Likewise, a breakthrough in NTU research may enable graphene – a carbon nanomaterial consisting of a single layer of interconnected carbon atoms – to be used to make the world’s thinnest lasers.

Leveraging on the ability of carbon nanomaterials such as carbon nanosheets and carbon nanotubes to store large amounts of electrical charge, NTU scientists are also exploring the feasibility of using them for energy storage devices. 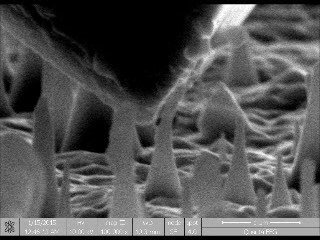 When pushed with a probe, the ultrafine diamond needles could bend and stretch without breaking.

By engineering the properties of diamond, NTU scientists are opening doors to previously unknown uses of the material.

In a surprising discovery that challenges common perceptions about diamond, an international team of scientists, led by NTU President Professor Subra Suresh, has discovered that ultrafine needles of diamond, each about a thousand times thinner than a strand of human hair, can be bent and stretched substantially without breaking.

Computer simulations also showed that when the nanoneedles were flexed, the bandgap of diamond – the energy barrier that electrons in the material have to overcome before they can act as carriers in an electric current – disappeared and the needles could conduct electricity at room temperature and pressure, just like a metal.

This finding could lead to diamond being used in power electronics, ranging from cars and electrical appliances to smart grids, highly efficient LEDs, optical devices, and quantum sensing, which enhances and improves what sensors can currently do.

In a media statement to announce the findings, Prof Suresh, who is also NTU Distinguished University Professor, said: "The ability to engineer and design electrical conductivity in diamond without changing its chemical composition and stability offers unprecedented flexibility to custom-design its functions. The methods demonstrated in this work could be applied to a broad range of other semi-conductor materials of technological interest in mechanical, microelectronics, biomedical, energy and photonics applications, through strain engineering."

Towards ultrathin graphene lasers that may revolutionise computers 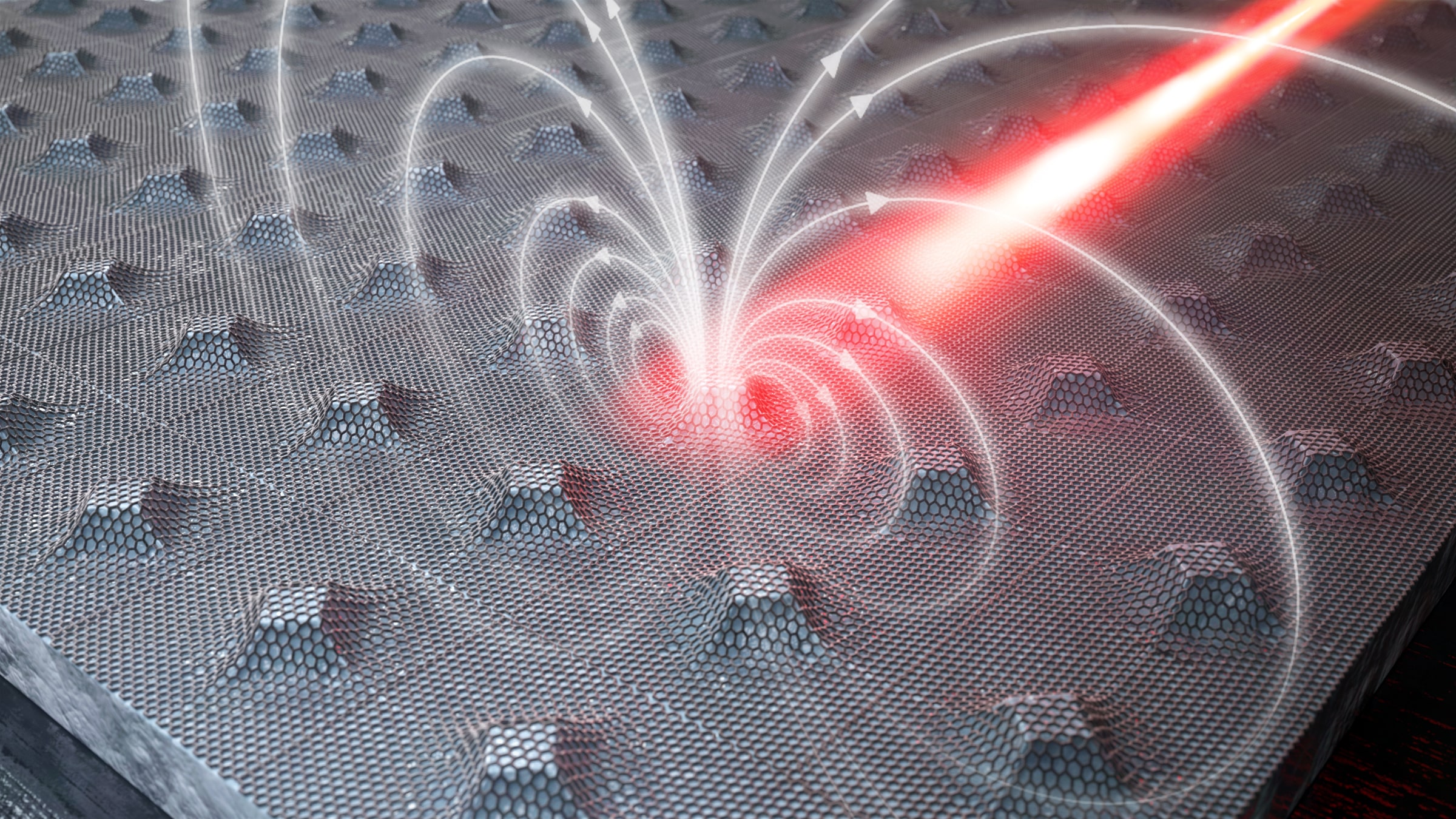 Nanopillars of graphene on a silicon wafer mimic the effect of giant superconducting magnets, pointing towards a new way to create ultrathin graphene lasers.

NTU research is also enabling high-performance computing applications such as photonic computing. Photonic computing – the use of light to relay information in computers, rather than electrical currents – is anticipated to be able to solve complex problems at blazing speeds far beyond conventional computers. The development of ultrathin graphene lasers could play a crucial role in the development of graphene-based photonic computers, by generating light that can transmit information between computer chips more rapidly.

Such graphene lasers may be possible when energy gaps – the energy difference between excited electrons and non-excited electrons in the material that determines the wavelength of the laser light – are created in graphene by giant superconducting magnets. However, the requirement to use bulky and costly magnets makes it impossible to consider using the resulting graphene lasers in compact and low-cost photonic computing chips.

By developing an array of nanosized graphene pillars on a silicon wafer, NTU scientists have invented a way to mimic the effect of giant superconducting magnets without requiring any external components. This recent discovery may pave the way to the creation of the world’s strongest and thinnest lasers for computing applications.

“Currently, transistors in computer chips communicate using electrical signals that consume a massive amount of power and cause a significant delay. Our discovery may enable ultrathin graphene lasers to be integrated into computer chips and allow data to be transmitted at the speed of light,” said Asst Prof Nam Donguk of the School of Electrical and Electronic Engineering, who led the research.

Producing carbon nanomaterials from waste such as tamarind shells and plastic packaging may be an environmentally friendly way of manufacturing materials that can store large amounts of energy.

The mining of raw materials to produce energy storage devices such as batteries has taken a toll on the environment. Hence, energy storage materials that can hold large amounts of charge and are also environmentally friendly are crucial foundations for supporting the oncoming wave of innovation.

This is something that NTU scientists keep in mind when developing high-capacity energy storage materials. At the School of Electrical and Electronic Engineering, in a collaboration with scientists from India and Norway, researchers are producing active carbon nanosheets, by baking tamarind fruit shells at high temperatures in the absence of oxygen. As tamarind fruit shells are porous and rich in carbon, they are an ideal material from which to make carbon nanosheets that may be used in energy storage devices, known as supercapacitors, to store charges.

“The large surface area of the carbon nanosheets enables them to store large amounts of charge and thus, function as an energy source for automobiles, buses, electric vehicles, trains, and elevators. Manufacturing them from tamarind fruit shells is an eco-friendly solution that will also reduce agricultural waste,” said Asst Prof Steve Cuong Dang, who led the study.

Likewise, plastic packaging waste can also be converted to carbon nanotubes, to be used in supercapacitors, as another team of NTU scientists and their collaborators have shown. The carbon nanotubes are produced from the gases obtained from baking the plastic waste at high temperatures in the absence of oxygen.

“Plastic consumption has been growing in recent years so there is an urgent need to reduce the amount of plastic waste generated. Manufacturing carbon nanotubes from plastic waste converts plastic into another material for other applications,” said Asst Prof Grzegorz Lisak of the School of Civil and Environmental Engineering, who co-led the research with Dr Tuti Mariana Lim, senior lecturer from the same school.

“Due to the promising physicochemical properties of carbon nanotubes, they are suitable candidates for high-tech applications such as structural composites, nanoelectronics, as well as energy conversion and storage applications.” added Dr Lim.

In both cases, the electrochemical properties of the tamarind fruit shell-derived graphene and plastic waste-derived carbon nanotubes were comparable to their commercial counterparts.

Harnessing the remarkable properties of carbon-based materials and uncovering more secrets about these materials, NTU scientists are set to make plenty more electrifying innovations that promise to charge up our lives.

More details of the research featured in this story can be found in: