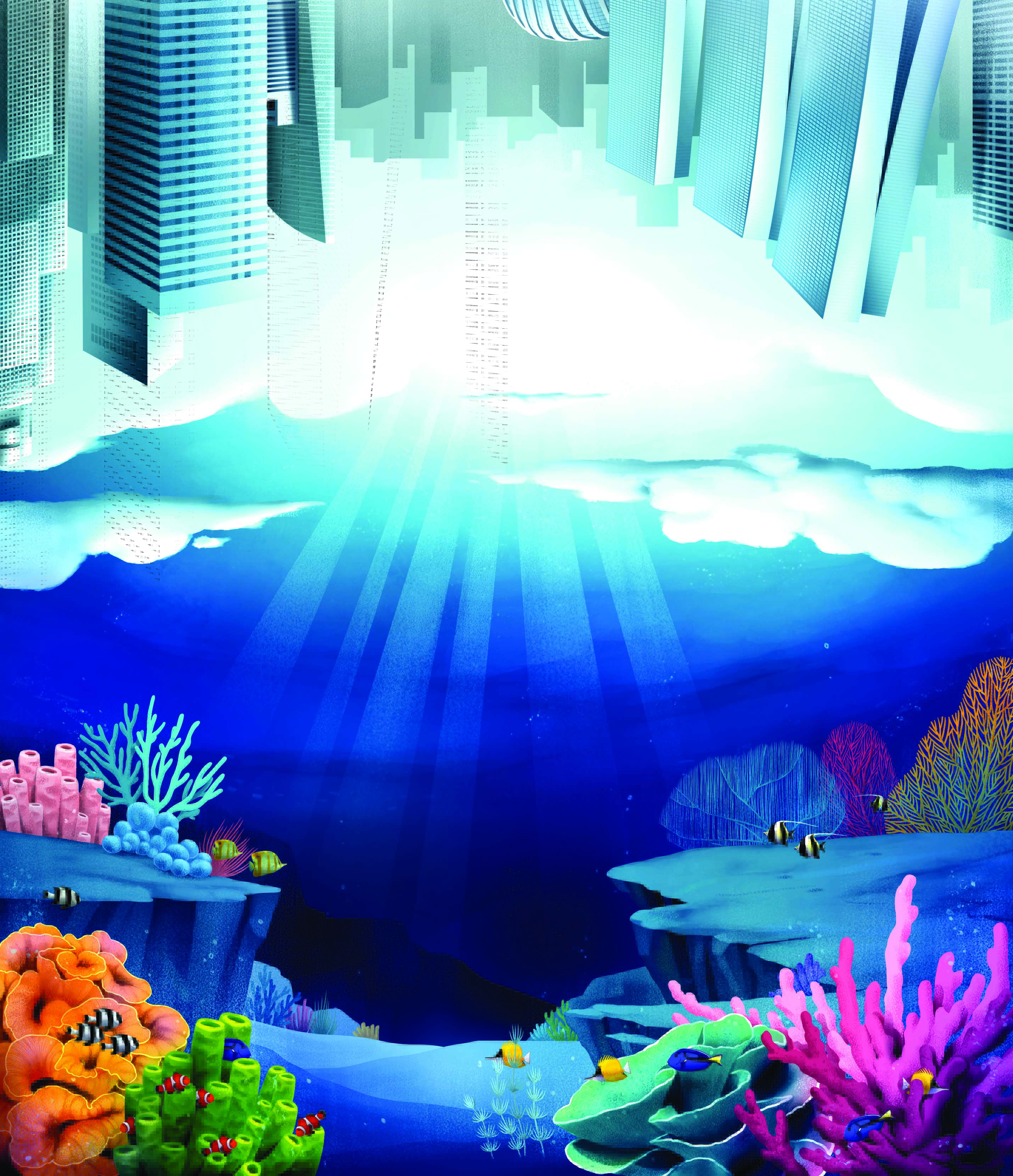 Sea-level rise poses an existential threat to Singapore and other coastal countries in the region. Here’s how science is addressing this challenge.

What do Bangkok, Jakarta, Manila and Ho Chi Minh City have in common? They are all leading capital cities of Southeast Asia, thriving and vibrant metropolises that are engines of growth for their respective economies, and home to millions of people. They are all also likely to be underwater in less than a hundred years.

This is the grim reality of climate change and the rise in sea level it is expected to cause. Human activities have rapidly increased the levels of carbon dioxide and other greenhouse gases emitted into the atmosphere, which in turn has increased the average global temperature. As the oceans warm, not only does this cause land ice to melt into the sea and increase the amount of water overall, but the higher temperature also causes the water to expand, exacerbating the problem of sea-level rise.

While sea-level rise is a certainty, what is not certain is the degree to which different parts of the world will be affected and, crucially, what countries should do to adapt to these changes. From generating accurate projections for policymakers to designing sea walls of the future, researchers across NTU are working to reduce this uncertainty and prepare Singapore and the region for the drastic changes that lie ahead.

As the most prosperous country in Southeast Asia, Singapore is in a better position than most to cope with climate change, having committed S$100 billion (US$74 billion) over the next 50 to 100 years to adaptation efforts. However, sea-level rise is predicted to devastate the rest of the region, which has over 450 million people living in low-elevation coastal zones, says Prof Benjamin Horton, Director of the Earth Observatory of Singapore (EOS) in NTU.

To make matters worse, the specifics of how sea-level rise will impact each country are hard to predict as they can vary widely depending on regional factors such as ocean and atmospheric circulation patterns as well as subsidence from tectonics and groundwater withdrawal. “The relative influence of these regional factors determines whether rates of local sea-level change are higher or lower than the global mean, and by how much,” Prof Horton explains.

At the moment, projections of sea-level rise in Southeast Asia are imprecise as tide records are incomplete, too short or “contaminated” by confounding factors like tectonics. To improve the accuracy of sea-level projections, Prof Horton is leading an interdisciplinary group of scientists at EOS who will be combining the best available geological and instrumental data with sophisticated modelling capabilities. Called the SouthEast Asia SEA-level programme (SEA2), the five-year project is supported by a large grant awarded by Singapore’s Ministry of Education in 2020.

“Key to making informed policy decisions for resilient future communities is the ability to forecast sea-level rise and understand its potential consequences on the built infrastructure and natural ecosystems that coastal communities depend on,” Prof Horton says. “The SEA2 proposal will push scientific frontiers to observe, reconstruct and model the regional processes of sea-level rise from instrumental and geological data.”

Providing data to Singapore’s third national climate change study due in 2022, the research will update projections of Singapore’s sea levels and help the Republic better prepare for the impacts of climate change.

For example, Prof Horton and his team have found that mangroves might not survive the predicted rise in sea level by 2050. In a study published in Science, Prof Horton and his team used sediment cores to show that mangroves were unable to grow if sea level rose more than six millimetres per year. These results suggest that mangroves—which provide essential ecosystem services like protection from storm surges, carbon sequestration and biodiversity preservation—will be threatened globally in as little as 30 years.

Failing to meet global emission targets would also cause sea levels to rise by more than one metre by 2100, and up to five metres by 2300, according to another study by Prof Horton, which was published in npj Climate and Atmospheric Science. “Coastal planners and resource managers at the local, national and regional levels need to plan and implement adaptation and mitigation measures to guard against sea-level rise to protect their economic, social and environmental security accordingly,” Prof Horton says.

The need for adaptation measures is keenly felt in land-scarce Singapore, as a one-metre rise in sea level would inundate some areas of the island, says Prof Chu Jian, Director of the Centre for Urban Solutions (CUS) and Chair of NTU’s School of Civil and Environmental Engineering.

“Another problem that Singapore faces comes from the need to discharge water during thunderstorms,” he continues. “If thunderstorms happen during high tide, the storm water cannot be discharged to the sea. For this reason, we need sufficient catchment areas to temporarily hold the water and prevent flooding.”

Prof Chu and his colleagues at CUS hope to simultaneously tackle both problems with an integrated seawall-catchment hybrid, a three-in-one solution that will create more living space for Singapore’s growing population at the same time. “When we build seawalls, it will be very expensive to cover the entire perimeter of Singapore. One way to save costs is to integrate coastal defence systems with land reclamation and space creation, combining it with other infrastructure,” Prof Chu explains. “This is a hard engineering problem, but one that NTU is poised to solve.”

Prof Chu envisages a coastal city built up from the seabed and protected by seawalls, providing dry land on the inside to be utilised for urban infrastructure. Floating platforms attached to the seawall could provide additional space, reducing overall costs of creating buildable areas. By using the edges of the floating platform as beaches or coral reefs to help re-instate marine ecosystems, the concept could also serve to create offshore islands as part of a coastal defence system.

The first challenge for this approach arises from the need to build the seawall in relatively deep water and to a considerable height exceeding 30 metres. “That’s about as tall as a seven-storey apartment block and very heavy. If you are going to build something like that on top of soft marine clay without a good foundation, the whole structure will sink,” Prof Chu explains. “In other words, if you have a 30-metre seawall, your foundation has to be strong.”

Addressing this problem, Prof Chu has developed a method called suction caisson foundation that allows the fast and cost-effective offshore installation of the foundation and the seawall as an integrated system.

“Designing this seawall will be challenging because on the inner side of the seawall will not be soil but open space usable for carparks, for instance, which therefore can’t provide a counterbalance to the pressure from seawater on the outer side of the wall,” he explains. More importantly, the concrete wall needs to withstand degradation for far more than a hundred years, in contrast to our current coastal infrastructure that is typically designed for an effective life span of a hundred years or less.

With these specifications in mind, CUS researchers have developed new construction techniques and materials that are up to the task, including durable concrete that can last for up to five hundred years. The team is also developing concrete with self-healing, self-sensing and bendable properties, as well as biocement—a new low-cost, sustainable construction material made with the help of microorganisms or plant-derived enzymes.

To tackle future problems of flooding if heavy rainfall meets with high tides on top of higher sea levels, Prof Chu suggests expanding Singapore’s water catchment areas by building coastal reservoirs in the sea. Besides increasing the catchment area, these reservoirs could then also serve to store fresh water, generate or store energy, or even support vertical or aquatic farming, Prof Chu adds on his vision of Singapore’s future.

With such dramatic changes to Singapore’s coastline on the horizon, protecting the natural environment and conserving its biodiversity is a priority of the Marine Science R&D Programme (MSRDP), supported with S$25 million (US$18.4 million) from Singapore’s National Research Foundation (NRF).

“Singapore lives within and is dependent on the marine system, which— including the port—is part of the country’s development and future industry,” says Prof Staffan Kjelleberg, Deputy Director of the MSDRP. “Singapore also understands that we have to address future challenges regarding climate change, including how to comprehensively preserve biodiversity, from higher organisms to microorganisms.”

“In the long-term, there will also be other changes to the coastline. Currently, we are trying to understand our existing reefs and seabeds, which are a mix of corals and other organisms like seagrass, as well as mangroves that are important for carbon capture,” adds Prof Kjelleberg, who is also the Director of the Singapore Centre for Environmental Life Sciences Engineering (SCELSE), a national Research Centre of Excellence hosted by NTU in partnership with the National University of Singapore.

The MSRDP has helped Singapore build a critical mass of experts for strategic research who are no longer in silos but work across various institutions, agencies and industry, Prof Kjelleberg says. “Importantly, we are training young scientists who can in the future appreciate the complexity and resilience of our marine ecosystems and understand the challenges, and who will work together, regardless of their institution and expertise,” he says.

In the nearly five years the MSDRP has been running, it has supported 25 research projects in both basic and translational research. One such multi-institutional cross-disciplinary project involves the conversion of “naked” classical sea walls into living ecosystems colonised by a diverse range of marine organisms. “To achieve this requires an interdisciplinary green engineering approach that merges engineering and life sciences,” Prof Kjelleberg says.

With two of Singapore’s well-funded Research Centres of Excellence—SCELSE and EOS—focusing on understanding our urban and environmental ecosystems, NTU is an ideal institution for national-scale collaborations involving cross-disciplinary, life sciences- and engineering-based research, according to Prof Kjelleberg.