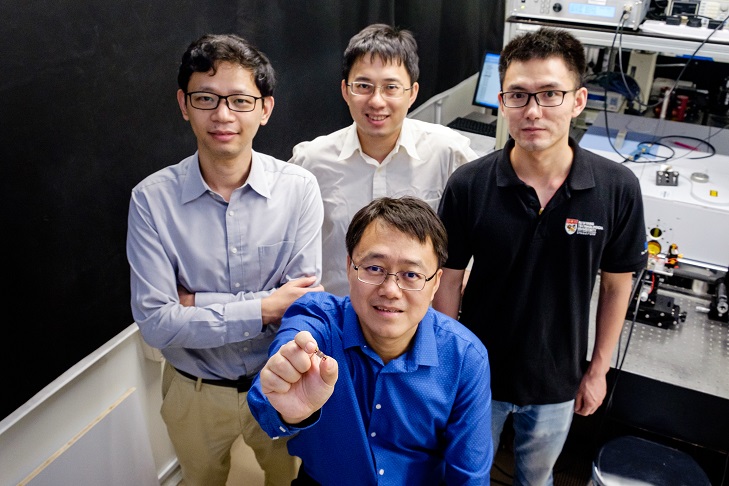 Scientists and engineers from Nanyang Technological University, Singapore (NTU Singapore) and the University of Leeds in the UK have created the first electrically-driven ‘topological’ laser, which has the ability to route light particles around corners - and to cope with defects in the manufacture of the device.
Electrically-driven semiconductor lasers are the most common type of laser device today. They are used in products such as barcode readers and laser printers, for fibre optic communications, and in emerging applications such as laser ranging sensors for self-driving cars.
However, their manufacture is an exacting process and current laser designs do not work well if any defects are introduced into the structure of the laser during these processes.
The Singapore-UK advance reported in Nature today (13 February) overcomes this long-standing problem and promises to lead to more efficient and less wasteful manufacturing using existing semiconductor technologies. This is accomplished by harnessing a concept from theoretical physics known as the topological states, in order to make a ‘topological laser’.
In the 1980s scientists found that electrons flowing in certain materials have ‘topological features’ – meaning that they can flow around corners or imperfections without scattering or leaking. The 2016 Nobel Prize in Physics was awarded to three theoretical physicists who pioneered the study of such topological states of electrons.
Now, an interdisciplinary team of engineers and physicists from NTU Singapore in collaboration with material scientists from the University of Leeds, have applied this topological approach to light particles, known as photons.
“Every batch of manufactured laser devices has some fraction that fails to emit laser light due to imperfections introduced during fabrication and packaging,” said Professor Qi Jie Wang, the lead scientist from NTU Singapore’s School of Electrical and Electronic Engineering. “This was one of our motivations for exploring topological states of light, which are much more robust than ordinary light waves.”
In the present study, the researchers worked with a type of electrically-driven laser called a quantum cascade laser, based on advanced semiconductor wafers developed at the University of Leeds.
A senior author of the study, Professor Giles Davies FREng, Pro-Dean for Research and Innovation in the Faculty of Engineering and Physical Sciences at the University of Leeds, said: “The topological laser is a great example of a fascinating fundamental scientific phenomenon being applied to a practical electronic device, and as our study shows, it has the potential to improve the performance of laser systems.”
To achieve topological states on a laser platform, the NTU and Leeds team developed a new design containing a valley photonic crystal, which was inspired by electronic topological materials known as two-dimensional valleytronic insulators.
The design consists of hexagonal holes arranged in a triangular lattice, etched into a semiconductor wafer, making it extremely compact.
Within the microstructure, the topological states of light circulate within a triangular loop of 1.2 millimetre circumference, acting as an optical resonator to accumulate the light energy required to form a laser beam.
“The fact that light circulates in this loop, including going around the sharp corners of the triangle, is due to the special features of topological states,” says Associate Professor Yi Dong Chong, a theoretical physicist in NTU Singapore’s School of Physical and Mathematical Sciences and co-lead investigator of the project. “Ordinary light waves would be disrupted by the sharp corners, preventing them from circulating smoothly.”
The researchers note that an interesting feature of the new topological quantum cascade laser is that the light it emits is at terahertz frequencies between the microwave and infrared regions of the electromagnetic spectrum. Terahertz light has been identified as one of the principal realms from which future technological applications in sensing, illumination, and wireless communications may emerge.
This research project spanned two years, and involved an interdisciplinary team of twelve researchers. Team members also include NTU physicists: Associate Professor Baile Zhang, postdoctoral research fellow and first author of the paper, Dr Yongquan Zeng; as well as Professor Edmund Linfield, Professor of Terahertz Electronics, and Dr Lianhe Li, Senior Research Fellow, both at Leeds.
Looking ahead, the joint team is working on lasers that make use of other types of topological states.
“The design we used in this project, called a valley photonic crystal, is not the only way to create topological states,” Professor Wang said. “There are many different types of topological states, imparting protection against different kinds of imperfections.  We think it will be possible to tailor the design to the needs of different devices and applications.”
In 2018, a team at the Technion – Israel Institute of Technology and the University of Central Florida in the USA developed a topological laser made from an array of connected optical resonators. The researchers showed that the topological states of light could travel efficiently around corners and defects in the laser array.  However, this prototype laser had the drawback of being much larger than most semiconductor lasers, as well as being ‘optically driven’, meaning that it was powered by another laser.
The research at the University of Leeds was funded by the UK’s Engineering and Physical Sciences Research Council.
###
Notes to Editor:
Paper titled “Electrically Pumped Topological Laser with Valley Edge Modes”, published in Nature, 13 Feb 2020.