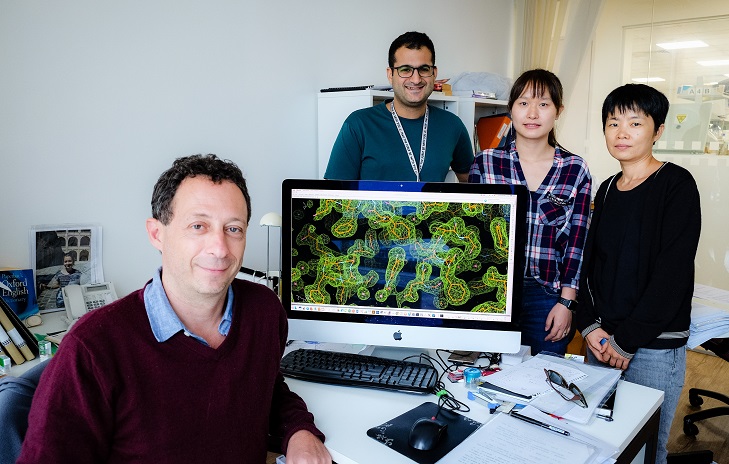 A team of molecular and structural biologists from Nanyang Technological University, Singapore (NTU Singapore) have found a potential new route to disabling respiratory syncytial virus (RSV) and human metapneumovirus (HMPV) after elucidating the structure of one of its key components.

RSV and HMPV are two closely related viruses causing severe and life-threatening respiratory diseases such as pneumonia and bronchiolitis in premature babies and infants, the elderly, and anyone with a weak immune system.
According to UNICEF, pneumonia killed a child somewhere in the world every 39 seconds in 2018, but there are no vaccines or effective antiviral therapies against it.
As they infect human cells, HMPV and RSV commandeer the cell’s machinery to make copies of themselves. To initiate the process, special proteins released by the virus interact with each other to make distinct protein complexes.
Writing in Nature, Dr Julien Lescar from NTU’s School of Biological Sciences and his team report how they have used cryo-electron microscopy to image the molecular structure of one of these large complexes, an enzyme called HMPV L:P polymerase.
Cryo-electron microscopy uses an advanced electron-scanning microscope, which can image a cryogenically frozen sample down to the sub-nanometre range, about ten times smaller than a strand of human DNA or one million times smaller than the width of a human hair.
The NTU images captured the enzyme at a resolution of 3.7 Angstrom, or 0.37 nanometres. Based on these two-dimensional pictures, the team then built three-dimensional computer models of the proteins’ L:P molecular structures.
Analysis of these model structures revealed key sites for molecules to interact at, offering new targets for designing antiviral molecules against both viruses.
Dr Lescar, who is a Principal Investigator at the NTU Institute of Structural Biology, said with this detailed structural knowledge, researchers can now hope to develop inhibitors that disrupt the enzymatic activities of HPMV L:P protein and potentially block infection by the virus.
“We hope that our work will help researchers in pharma and academia around the world to design much needed therapies for difficult viral infections that often lead to antibiotic-resistant bacterial infections,” said Dr Lescar, an Associate Professor at NTU's School of Biological Sciences.
Since the HMPV proteins they studied are essentially unchanged through evolution and very similar to those of RSV and other virus species belonging to the Pneumorivridae family, the scientists hope that inhibitors developed against HPMV could also work against a broad spectrum of viruses involved in respiratory diseases, and inform similar quests against other viral diseases.
Dr Lescar and colleagues have founded a spin-off company named Epitoire that is actively engaged in designing DNA replication blockers as potential therapies against these viruses, and the company is currently seeking investors and clinicians to support it.
###
Notes to Editor:
The article “Structure of the human metapneumovirus polymerase phosphoprotein complex” was published in Nature (7 Nov 2019), DOI: 10.1038/s41586-019-1759-1.