Holder of three technical patents and with more than 35 years of experience in Infocomm technology, foreign exchange, and eCommerce, Richard started his entrepreneurial journey with a failed business venture at the age of 14. Richard at his favourite hangout spot at the M-DAQ cafe

He gained exposure in foreign exchange working in a front office setting with two international banks for over a decade.

That was when the idea for the original M-DAQ product began. He wanted to know how much his bank’s restricted stock units in USD and listed in NYSE would be worth at any given point in SGD.

In late 2009, he was forced into a career crossroad that marked a turning point in his life. He decided to heed his calling and chose the risky path of technopreneurship. Richard set up M-DAQ at the end of 2009.

Going from strength to strength

Then came top prize in the inaugural SG: Digital Techblazers award organised by Infocomm Media Development Authority and SGTech in Nov 2018. The company won the Best Technology Company to Work For biennial award by Singapore Computer Society (SCS), and the Enterprise 50 (E50) Special 25th Anniversary Digital Economy Award in 2019. Richard was also named Entrepreneur of the Year by SCS in 2018, and the EY Singapore Entrepreneur of the Year (Fintech) 2020 award by Ernst & Young LLP.

But behind the success were years of struggle. ‘’Running out of cash, having to forgo salaries, and taking on personal loans were very real challenges, especially for me and my family’s mental well-being,’’ recalled Richard.

Strong family support and prayers lifted him, while close adherence to the values of servant leadership helped to attract and retain a critical core team. “As a business leader, intention and purpose are critical in sustaining this journey,” said Richard, adding that a good leader should be prepared to take the first hit during tough times, and have the heart to reward employees when the good times roll.

Explaining his approach to building his team, he shared that there will always be candidates who ace interviews and technical tests, but cultural and expectation mismatches will quickly determine the longevity of their tenure.

“One acid test is how much the new member is willing to forgo in terms of immediate cash compensation for future upside in equity plans,” said Richard. 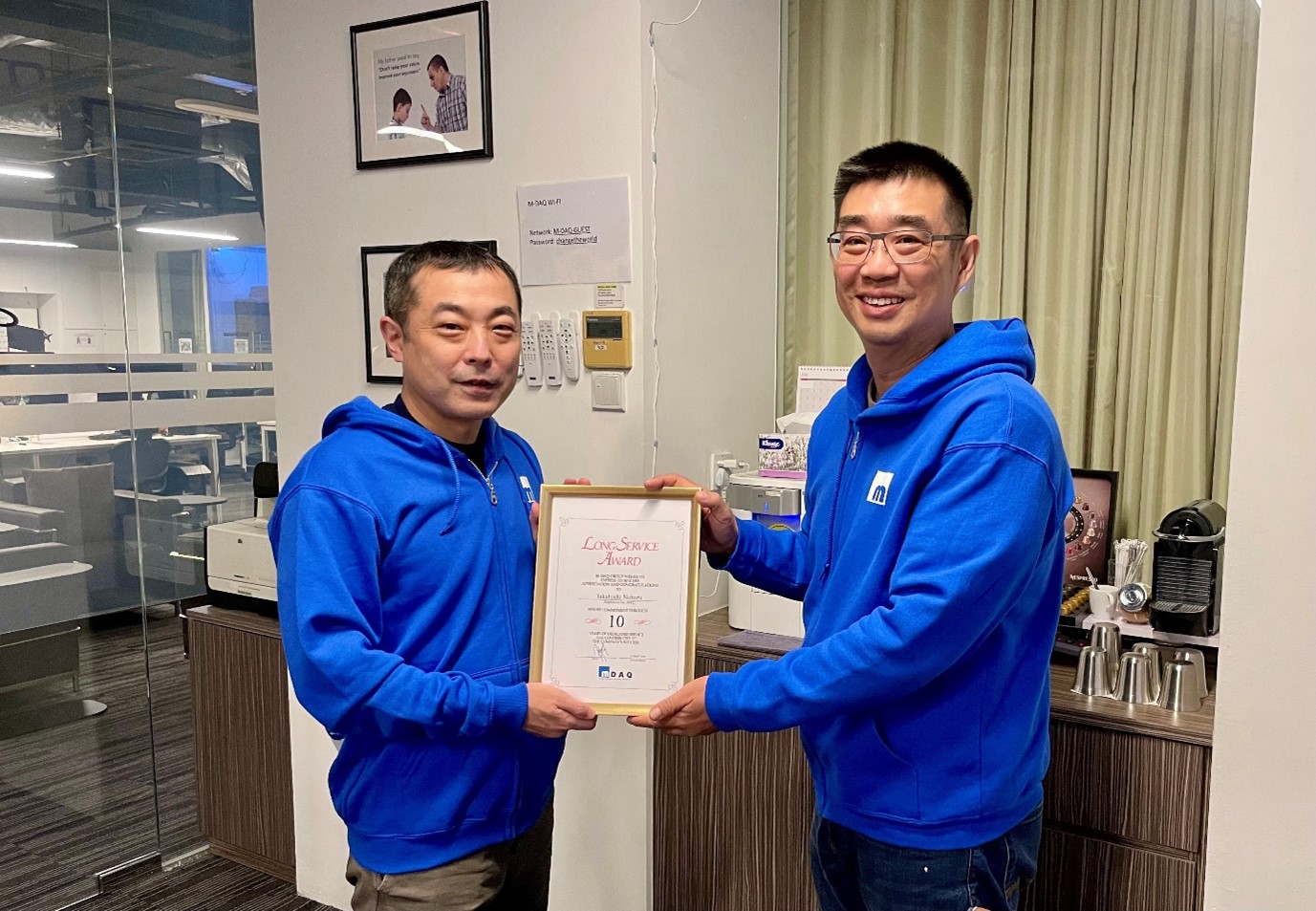 Today, M-DAQ has support from the Economic Development Board (EDB), Enterprise Singapore and the Monetary Authority of Singapore. EDB Investments (EDBI) has been a shareholder since 2015.

Series A and B funding were easier to obtain, thanks to efforts by government agencies, and a growing community of start-ups that have attracted investors.

“In 2010, there were hardly any venture capitalists (VCs) operating in Singapore or Southeast Asia and the US-based ones were unfamiliar with this region. Our Series A was funded by local industry leaders and not via the traditional VC route.

It was only during our Series B that we had a few US and regional VCs. In Series C, we took on strategic investments from China and EDBI. In our latest Series D, we expanded our investor base to Japan and Korea, as well as a regional private equity firm,” explained Richard.

“Although M-DAQ is better placed for the future thanks to past lessons and camaraderie from the earlier tough times. The next critical phase is to ensure that there are sufficient home-grown start-ups that can get a public listing and especially on the local bourse. Even then, the current decacorns and newly minted unicorns are mostly not founded by homegrown founders,’’ he remarked.

Tough and scary as it may sound, entrepreneurship is a rewarding experience.

“If you have an idea or a dream, pursue it and don’t wait. The only way to minimise your regret is to try it. Even if it fails, the experience you gain would be invaluable and highly sought after,” said Richard.

To succeed, his advice to the younger generation is to be more curious, hone their public speaking and networking skills, and practise servant leadership.

“Of course, finding the right co-founders and founding team is critical. Building a culture and finding believer-investors is super important. Be steadfast in your beliefs, and your enthusiasm and sincerity should be able to resolve everything else. Entrepreneurship is living a few years of your life like most people won’t, so that you can spend the rest of your life like most people can’t,” he added. 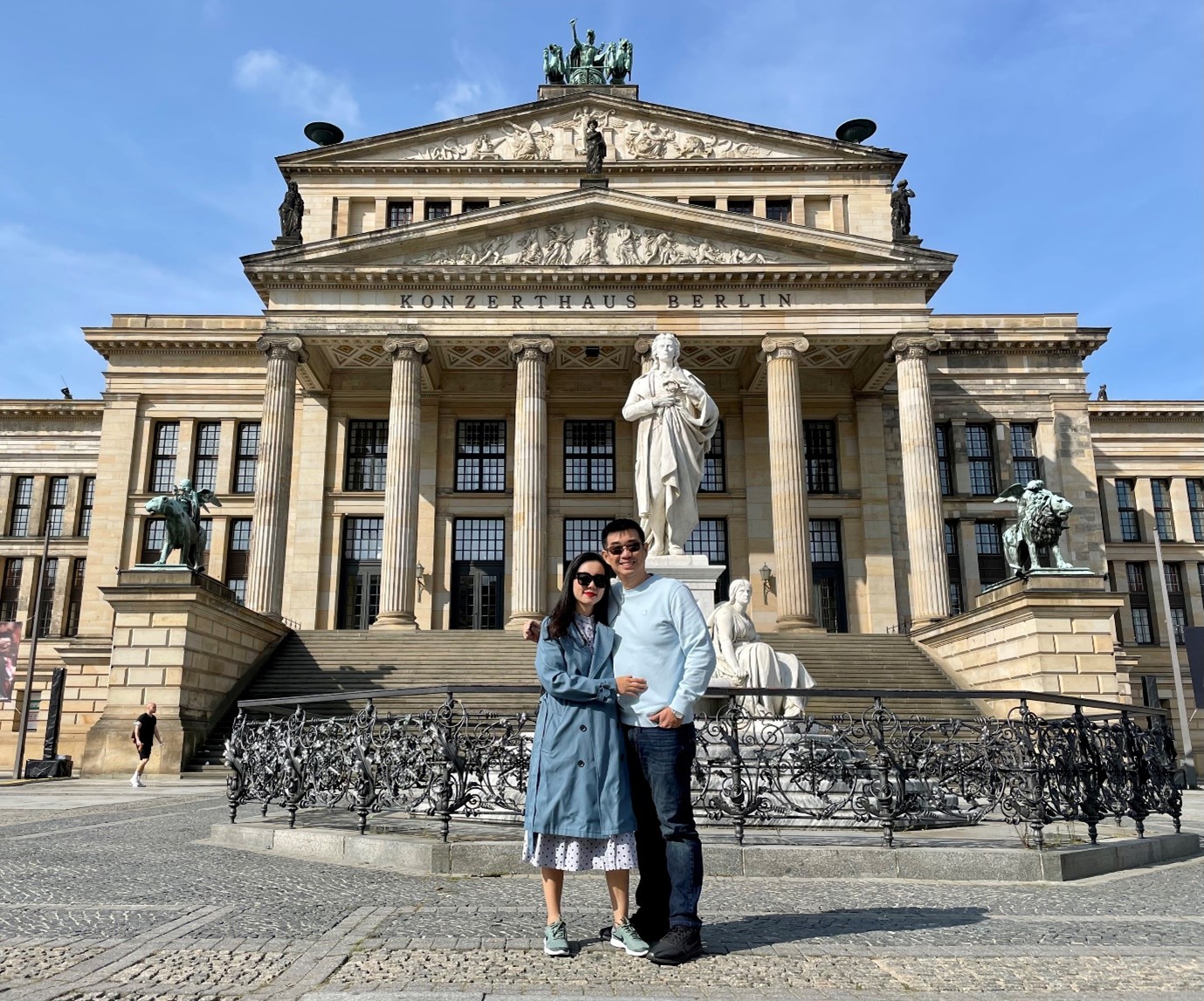 Richard with his wife (Si Si) in Berlin,
Germany circa Sep 2021, courtesy of VTL

Helping the next generation to succeed

Despite his busy schedule, Richard finds time to volunteer in the undergraduate mentoring programme and the Renaissance Engineering Programme, and has been serving on the NBS Advisory Board since January 2019.

“I have personally benefitted from several great mentors in my career and often felt that mentoring should be made available even before the students graduate so that they can be better prepared for the world. I believe in helping the next generation to succeed, which is why most of my voluntary appointments have been with educational institutions, including NTU, the National University of Singapore, Singapore Management University, Kuo Chuan Presbyterian Primary and Secondary Schools, and Ahmad Ibrahim Secondary School (my alma mater). At the same time, I feel I can learn from the unique perspectives of the next generation,’’ he shared.

Remembering his undergraduate days at NBS, Richard said he used to drive a weekend car to and from NTU in a bid to save with the $20 daily coupon that only allows cars on the road from 7 pm to 7 am.

“I had to reach school before 7 am and often set up a portable bed next to the toilets to catch up on my sleep. In the evenings, I had to roam around until 7 pm to go home (in Yishun) or go to my student’s homes (all over Singapore) for tuition income. I was literally living a “vampire’s life” – the car never got to see daylight,” he recalled.

Webinar: Rising to the Challenge: Strategic Leadership at a Beauty Giant in Turbulent Times