Over the past year, the OneLKC community has repeatedly shown that COVID-19 has not deterred the School from celebrating its achievements and milestones, and its 10th anniversary was no exception. To cap off the 10th anniversary celebrations, the School held a celebratory virtual dinner on 10 March, with great aplomb. 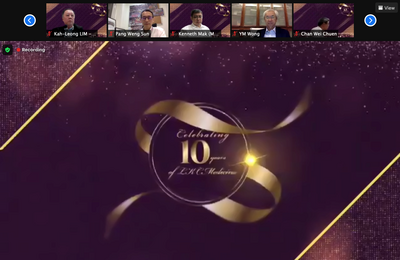 Close to 300 guests, including NTU, Imperial, and LKCMedicine leadership – past and present – faculty, staff, students, alumni, and key partners gathered online, as bento dinners were delivered to attendees based in Singapore before the start of the occasion.
The audience warmed up at the start with a live quiz on LKCMedicine, which was followed by a live chat with former Governing Board (GB) member Professor Judith Swain and current GB member Professor Desmond Johnston.
Dialing in from her home just south of Los Angeles, Prof Swain reflected on the School turning 10, saying, “If you think about LKCMedicine, starting a brand-new medical school in a country that has two other medical schools, and having a very unique curriculum that hasn’t really been done anywhere else, and having an international partner in Imperial, all those things together, it’s an astounding accomplishment.” 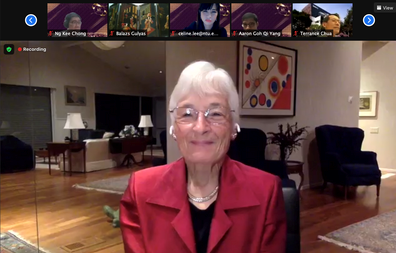 Joining from London, Prof Johnston said, “The students have been and the training has been immaculate, considering it started as a totally new medical school. And the graduates we can be so proud of. They are just the kind of people we would like to think would be looking after ourselves, or our friends and family.”
Prof Johnston also went on to applaud the exemplary quality of research contributions and exciting new areas of research to develop in the future, as well as the core leadership, paying particular tribute to Governing Board Chairman Mr Lim Chuan Poh and Dean Professor James Best. 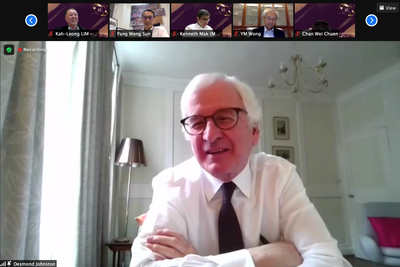 At 7.45pm sharp, the audience was treated to an opening video, and a pre-recorded virtual performance by LKCMedicine’s student acapella group, MedLee, who performed a rendition of The Weeknd’s Blinding Lights. 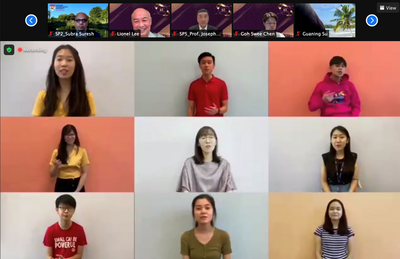 After their performance, Guest-of-Honour LKCMedicine Governing Board Chairman Mr Lim Chuan Poh delivered his welcome speech, which paid thanks to the many people that contributed to what LKCMedicine is today. 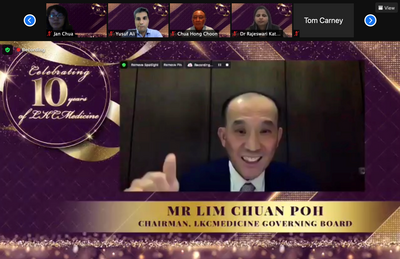 Addressing the attendees, Mr Lim remarked it would be fitting to report the high-level observation from the esteemed external Review Panel, comprising both local and international leaders, following a Programme Evaluation that LKCMedicine has just undergone.
He quoted: “LKCMedicine is undoubtedly a success story. While the School had gone through an initial difficult period, it is now thriving. The students are confident and feedback on the performance of LKCMedicine graduates has been positive. All these augurs well for the future of LKCMedicine.”
Next, the occasion continued with an emotive sand-art performance depicting LKCMedicine’s journey, highlighting its achievements over the past decade.
As the visual artwork unfolded, NTU President Professor Subra Suresh who lauded the achievements of the School and its graduates in the face of Covid-19, and particularly its researchers, saying, “Today, this dual mission is particularly salient as the world fights the COVID-19 pandemic. LKCMedicine can stand proud that its graduates have risen to the challenge in these unprecedented times”. 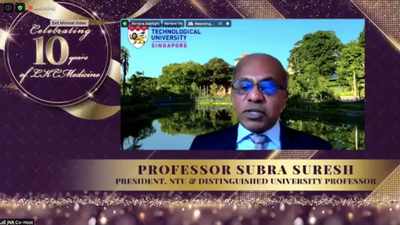 Towards the end of his address, Prof Subra added, “On the 10th year mark, we are on the cusp of achieving breakthroughs on the unimaginable in medicine such as the possibility of a drug-free cancer treatment and many more.”

Imperial College London President Professor Alice Gast added to Prof Suresh’s words by saying, “It seems just the other day that we laid the foundation stones to the beautiful buildings…Beyond the state-of-the-art buildings, it has been the people that have made LKCMedicine such a monumental success.” 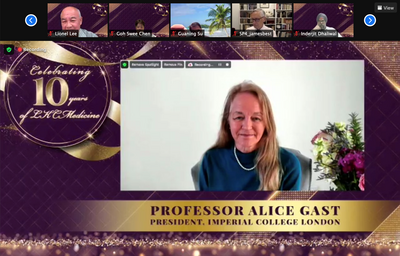 She went on, “In the last 10 years, LKCMedicine has reshaped medical education forever, and we congratulate the many colleagues and friends around the world who have contributed to its success.”
The congratulatory speeches from the Presidents of our parent institutions were followed by a video paying tribute to LKCMedicine Dean Professor James Best, in which a host of people from across the School and the School’s key partners shared their well-wishes for Prof Best, who will be stepping down as Dean of LKCMedicine at the end of March 2021.

In 2019, Prof Best received the Imperial College Medal in recognition of his exceptional contribution to making the School a success.

Thanking everyone for their kind words, Prof Best said in his speech that followed, “I truly am immensely grateful for the opportunity given to me by NTU and Imperial. I can’t possibly list them all, but there have been so many wonderful people in the School as well.”
He continued, “The past seven years have been a wonderful life experience, as well as an academic experience. It really has been my good fortune and privilege to be Dean of LKCMedicine.”
Dean-Designate Professor Joseph Sung, who will receive the baton from Prof Best on 1 April, commended him for his remarkable accomplishments over the course of his tenure as Dean for LKCMedicine. 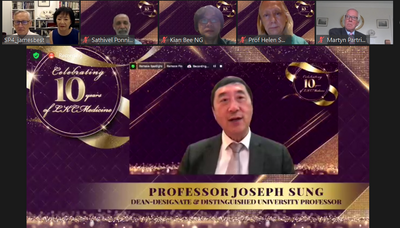 He said, “Being the first Resident Dean of LKCMedicine, appointed in 2014, he has made unparalleled contributions in the recruitment of faculty, staff and students, steering the School direction, overseeing the education and research portfolio of LKCMedicine and driving the strategy and goals.”

A congratulatory video which featured the OneLKC Family, Imperial, NTU and Friends of LKCMedicine was played towards the end of the occasion, before the dinner closed with a final performance by MedLee. 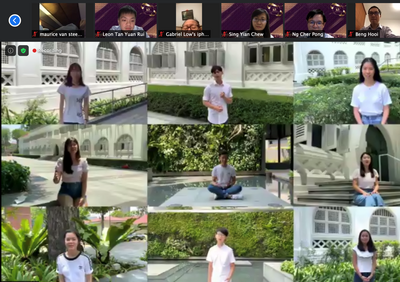 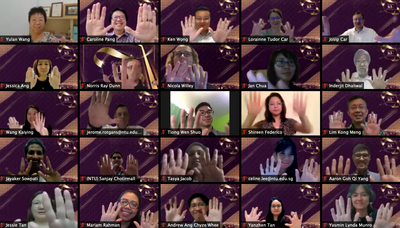 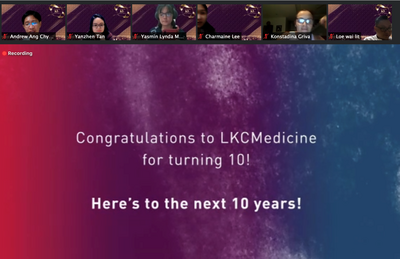 Here’s to the next 10 years of LKCMedicine!

LKCMedicine Town Hall with the Deans