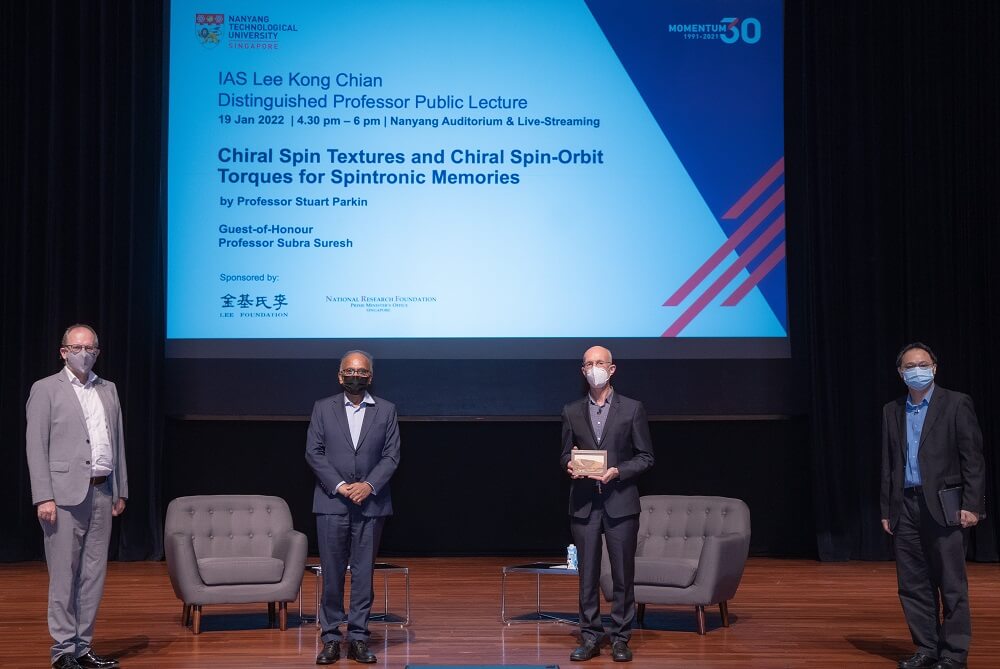 The hybrid format public lecture, held on 19 January 2022 at the Nanyang Auditorium, was organised by the Institute of Advanced Studies (IAS) at Nanyang Technological University (NTU) with support from the Lee Foundation and the National Research Foundation, Singapore. Our distinguished speaker, Prof Stuart Parkin, is the Director of the Max Planck Institute for Microstructure Physics and Alexander Von Humboldt Professor at Martin Luther University Halle-Wittenberg. For his work that enabled the “big data” world of today, Prof Parkin was awarded the Millennium Technology Award from the Technology Academy Finland in 2014.  He also received the King Faisal Prize 2021 for his research into three distinct classes of spintronic memories.

From household to industry and from security to ministry, the data is everywhere. This data is stored somewhere or the other on a disk drive. Also, the expansion of the digital world calls for a need to go beyond magnetic disk drives to bring down the size of the device and enhance the speed of data transfer.

In this public lecture, Prof Stuart Parkin addressed the problem which requires state of the art solution and introduced the “Racetrack memory”. The “Racetrack Memory” is based on the latest development in spintronics that turns spinning electrons into small magnetic units to store information. This makes it possible to build data storage devices with greater capacity than hard drives, are a million times faster and require less energy. He further elaborated on the working of this novel storage class memory device which has no moving parts, but works with spin-polarised currents via spin-orbit torques in synthetic antiferromagnetic racetracks.

The lecture underlined that these synthetic antiferromagnetic structures are highly promising for spintronics, especially since this allows for magnetic structures which have zero net magnetisation while simultaneously possessing magnetic surfaces that aid the detection of their magnetic states. The non-volatile Racetrack Memory has the potential to replace the density memories, namely hard-disk and solid-state drives. The lecture was followed by an interactive question and answer session, moderated by Prof Tze Chien Sum, Director, IAS@NTU. Prof Parkin addressed different questions extending from the working principle of novel classes of memories to fundamental physical entities such as skyrmions. A few students also put forward questions concerning efficient research practices and future outlooks.