Given the strong emphasis on fair value measurement in current times and its significant impact on financial statements, audit practitioners may encounter business valuation issues and challenges. It is therefore imperative for audit practices today to ensure that sound processes are in place and resources are appropriately managed to handle valuation-related matters on financial reporting requirements.​

Jointly created by Nanyang Technological University (NTU), Institute of Singapore Chartered Accountants (ISCA), and Savills, our Business Valuation Best Practices programme is specially curated for directors/audit practitioners of SMPs to equip them with the necessary knowledge and skills to effectively set up and manage a business valuation practice.

This programme is approved by ISCA for 28 CPD hours.

To minimise disruption from work, the 4-day workshop is staggered over two periods:

Participants do not need to contact SkillsFuture to apply for funding prior to course registration. NTU will facilitate the funding paperwork for both self and company-sponsored participants. Participants will be invoiced the net amount after funding and GST.

“This programme is very structured and well presented. It is more useful than I expected and I would strongly recommend it to other SMPs.”

“As a practising accountant, it is necessary to have the basic knowledge of business valuation best practices. The programme has served the purpose perfectly.”

“The 4-day programme has widened and deepened my understanding of this industry and it was a fast and comprehensive way to boost my confidence in dealing with business valuation matters in future.”

“I am glad that such a professional course has been made available as I am an auditor by training and experience. To be able to get an insight on how the valuation practice operates is quite an eye-opening experience. I am now able to better understand how the valuation process plays a part in relation to commercial proceedings. Some practices and principles of the valuation business are also good measures that I have learnt to adopt as part of my business.”

“I found that the course is very informative. The facilitators are very knowledgeable. As a practitioner, I received some information that clarified some of my burning questions.” 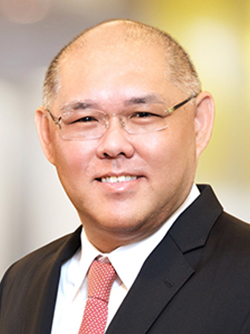 Eric Teo is the Head of Business Valuation and Advisory, Southeast Asia at Savills and is an adjunct associate professor at the Nanyang Business School, NTU. He also serves as an adjunct associate professor/faculty at other universities such as Murdoch University, SIT, SMU, SUSS. He was an Executive Director with Ernst & Young (EY) and has worked in both the Singapore and Australia Valuation Practices. He led the EY Asia Pacific Valuation Technical Standards Group from 2012 to 2015 and was involved in the development of learning curriculum and materials for the global valuation practice. Eric has conducted business valuation for transactions and financial reporting for companies from various industries and his clients include SMEs, GLCs, MNCs and public listed groups.

Eric is the Chairman of the International Valuation Standards Council (IVSC) Membership and Standards Recognition Board. The IVSC is the global organisation which produces the International Valuation Standards (IVS) for the valuation profession. Eric is also the Founding Chairman of the Council of the Institute of Valuers and Appraisers of Singapore (IVAS). The IVAS is an institute set up to advance the business valuation profession under the auspice of the Singapore Accountancy Commission. He also serves as a board member of the Intellectual Property Office of Singapore (IPOS). Eric is a Chartered Accountant (Singapore), Chartered Accountant (Australia and New Zealand), CPA (Australia), Chartered Valuer and Appraiser (Singapore), Senior Fellow of Finsia and Fellow of the Royal Institution of Chartered Surveyors (RICS).

The Chartered Valuer and Appraiser (CVA) programme is the national certification for the practice of business valuation in Singapore.

Our interactive Mergers and Acquisitions Programme at Nanyang Business School, Singapore, aims to provide you with a practical, end-to-end understanding of the whole merger and acquisition value chain. Learn more.

Our Nanyang Enterprise Risk Management programme gives management and risk executives a more holistic view of risk throughout the entire organisation, so they can better align their business model and strategies. Learn more.