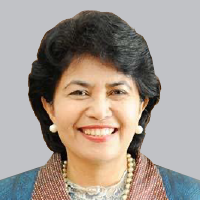 Prof Dewi Fortuna Anwar is a Research Professor at the Indonesian Institute of Sciences (LIPI) where she also held the position of Deputy Chairman for Social Sciences and Humanities from 2001 to 2010.

A member of the Indonesian Academy of Sciences, Prof Anwar is also the Vice Chair of The Habibie Center (THC) in Jakarta, after having served as Chair for THC’s Institute of Democracy and Human Rights.

From 1998 to 1999, she also held the positions of Assistant to the Vice President for Global Affairs/International Relations and Assistant Minister/State Secretary for Foreign Affairs during the Habibie presidency. Prof Anwar sits on the Boards of several organisations including the Stockholm International Peace Research Institute, the Center for Information and Development Studies in Jakarta as well as the organisation Shift and the Asia Society which are both based in New York.

Prof Anwar obtained a BA and MA from the School of Oriental and African Studies (SOAS), University of London and a PhD in Politics from Monash University in Australia. Prof Anwar joined the Centre for Humanitarian Dialogues’ board in 2019.