Eye’s retina is part of central nervous system crucial for vision as it transduces optical image into electrical signal which passes through the optical nerve. It is a complex system comprising several neuronal layers. Degradation of photoreceptors leads to blindness as, for example, in case of Retinitis Pigmentosa – a rare disease of genetic origin. There is currently no treatment for such disorders.

Prof Lanzani’s research focuses on rescuing vision in blind retinas. He was studying organic polymer which had light absorbance similar to eye pigment and this is how the idea arrived to use the material to replace photoreceptor. Advantages of using organic polymers are that they are compatible with their biological environment.

The team comprising Prof Lanzani, Prof Benfenati and MD Pertile  then used rats as an animal model. Nanoparticles were injected into subretinal space of blind rats. Their pupillary reflex was then examined and compared with that of healthy rats, blind rats and blind rats with injected glass nanoparticles. And reflex was rescued. Retina coverage was ~80% and after eight months, nanoparticle concentration was still significant.

Then visual acuity was studied for these groups and it was shown that acuity almost returned to the normal level unlike glass injected impaired rats. The effect was not gone after eight months. Prof Lanzani and his co-workers wanted to know if it is possible to rescue vision of rats blinded for ten months with disorganised retina. Although they managed to recover more than half acuity, recovery is not complete. 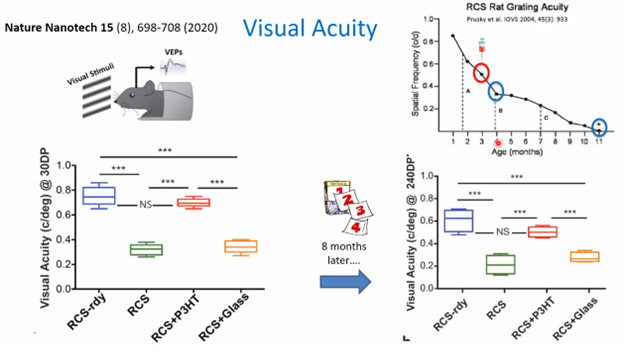 Finally, the nanoparticle absorbance maximum is to the right from that of rat retinal pigment and as Experimentum crucis, Prof Lanzani showed that due to this reason, treated animals were able to see red light that healthy animals cannot.

This research from Prof Lanzani showed exciting possibilities for rescuing vision in people with retinal disorders which are the main cause of blindness in the western world.