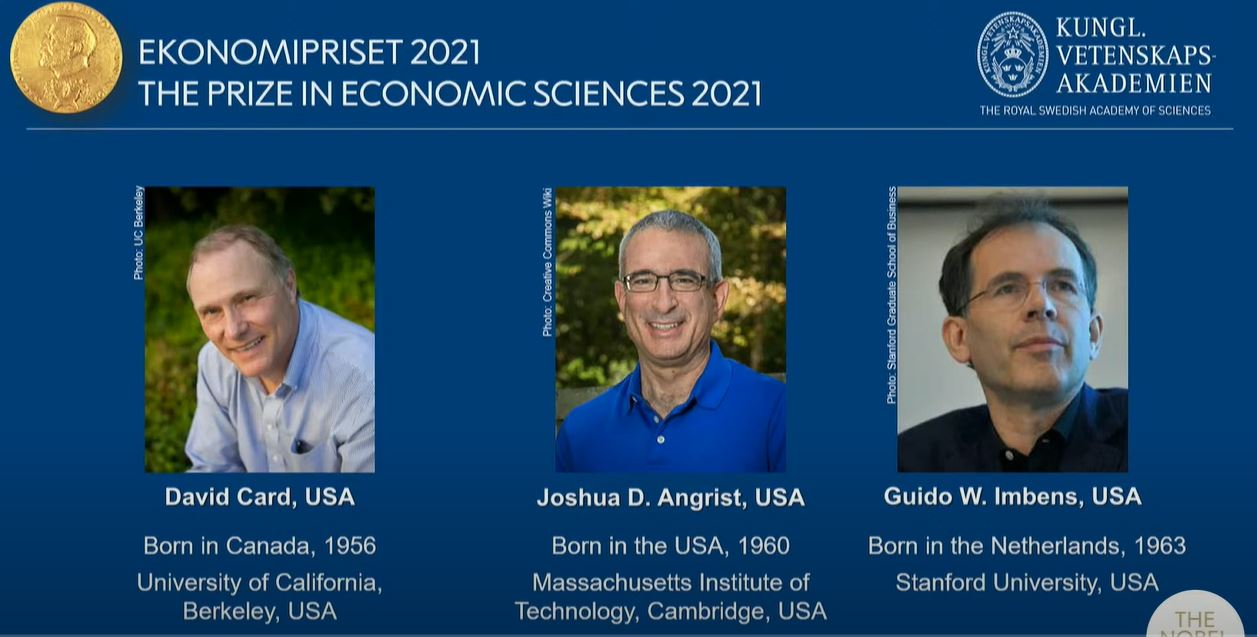 The 2021 Nobel Prize in Economic Sciences was awarded to Prof David Card (UC Berkeley), Prof Joshua D. Angrist (MIT), and Prof Guido W. Imbens (Stanford) for pioneering “natural experiments” to help answer important real-world questions e.g., Does immigration affect the wages and employment of natives? What are the effects of minimum wage on the employment prospects of low-skilled workers? Does receiving an extra year of education make people earn more?

These real-world questions and others like them are central to societies, firms, governments, and individuals. However, answering these big questions - particularly to demonstrate causal relationships among variables of interest - is inherently difficult because social scientists cannot run experiments on human beings like scientists run experiments on objects.

The 2021 Nobel Laureates provide a viable solution to this challenge - by using natural experiments. What are natural experiments? When certain events occur in the real world, causing different groups of people to receive different treatments, those events function as if the real world “naturally” performs a human experiment by randomly dividing individuals into treatment and control groups. For example, if the government suddenly announces that a randomly selected quarter of the population will receive a $500 cash bonus next month, this event is a (hypothetical) example of a natural experiment. Those who are randomly selected to receive the $500 bonus serve as the treatment group, whereas the rest of the population serves as the control group. Researchers may then use the data from this natural experiment to test a hypothesis, for example, on whether an unexpected income increase would increase consumption by comparing the subsequent consumption levels between the two groups.

Through their work, the 2021 Nobel Laureates have developed a rich set of analytical tools for empirical social scientists so that they do not themselves need to conduct human experiments. Instead, scientists just need to collect and analyse the data generated from natural experiments.

One of the works by Prof Joshua Angrist studies how military service affects lifetime earnings. Naively comparing the lifetime earnings between those with and without a history of military service creates an inherent bias because certain types of men could be more likely than others to serve in the military. This selection bias makes it difficult to draw causal conclusions. In a paper published in American Economic Review, Prof Angrist (1990) took advantage of the Vietnam era draft lottery since men’s military service was determined by a lottery draw. This event creates a natural experiment by randomly assigning a group of men into the treatment condition (military service) and the rest to the control condition. Prof Angrist found that, in the late 1980s, long after service in the Vietnam era had ended, white veterans’ earnings were approximately 15 percent less than the earnings of comparable nonveterans. Today, analysing data from natural experiments has become very common among economists and other social scientists. They grab opportunities arising from natural experiments - such as lotteries, natural disasters, policy changes, and even TV reality shows - to answer important questions.

For more information, watch the video here on 2021 Nobel Prize In Economic Sciences.