More than 9,200 Class of 2021 graduands attended the in-person NTU convocation ceremonies held over two weeks from 17 September to 2 October, the second convocation to be held during the COVID-19 pandemic. Safe management measures were observed in accordance with the Government’s advice, ensuring that graduands and their loved ones could come together to celebrate their graduation and achievements. The Convocation also marked the launch of NTU’s 30th anniversary celebrations.

Many outstanding and inspiring individuals in the Class of 2021 have overcome challenges and made the most of their potential through opportunities at NTU. We speak to three of them to find out how their university life has enriched their learning and what they are looking forward to doing next. 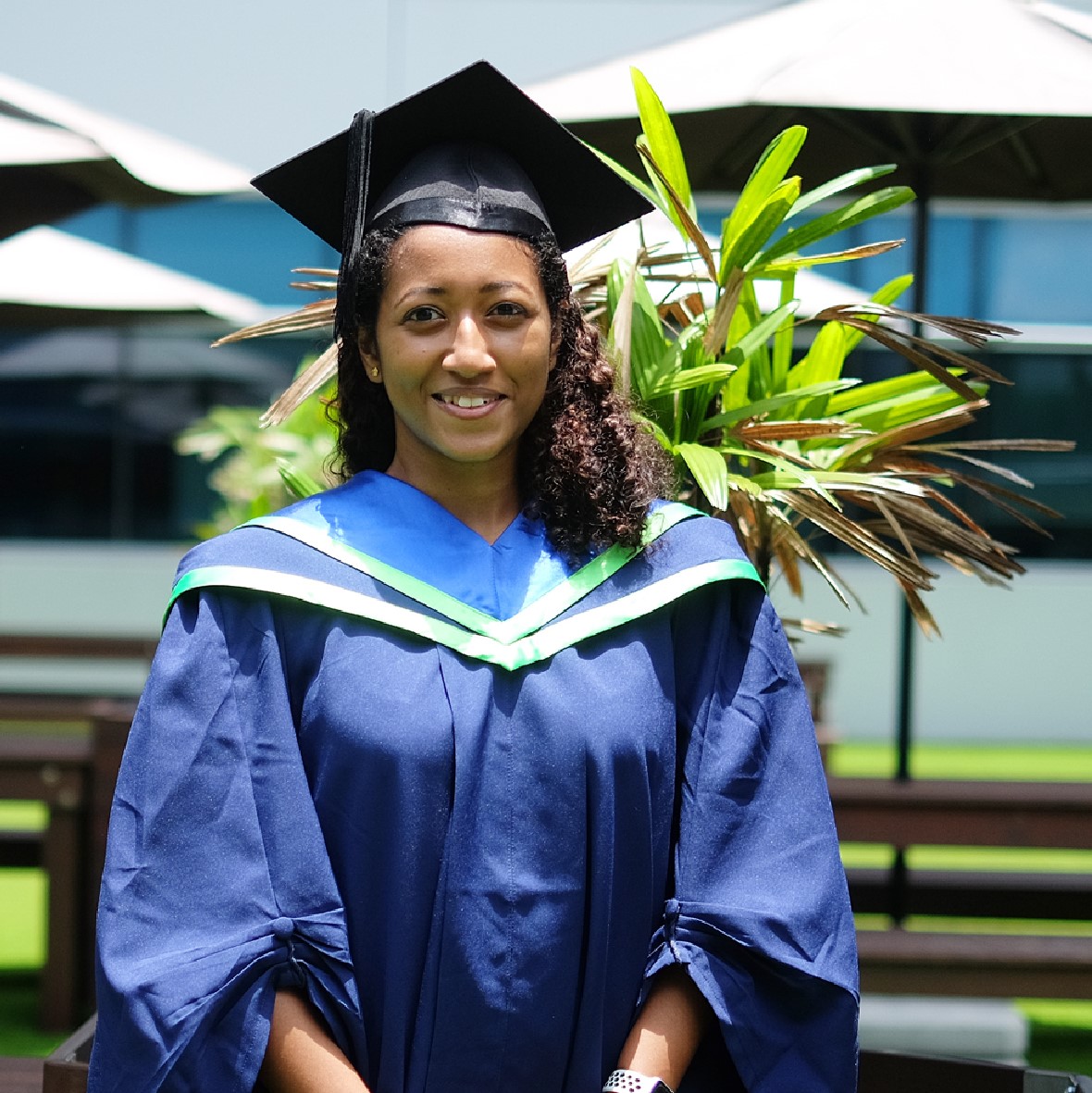 Stella Ferdinand was among the inaugural batch of graduates from the Biological Sciences and Psychology programme offered by NTU School of Biological Sciences (SBS). She was also SBS' valedictorian at the convocation ceremony on 27 September. Stella's elder sister, who studied Psychology, introduced her to the science of mind and behaviour and got her fascinated with how the human brain works. "When I asked her about the anatomy of the human brain, I was enthralled by its many functions. The way each small segment of flesh controlled a large part of one's behaviour was fascinating to me."

Stella said that the interdisciplinary programme has provided her with a wide range of skills. "Being trained in biology enables me to understand clinical terms better and build rapport with clinicians, while psychology enables me to constantly consider patients’ and clinicians’ personas to design more effective solutions to the complexities presented in healthcare."

The Biological Sciences and Psychology graduate seized many opportunities in NTU. Stella pursued a Minor in Entrepreneurship, which led her to start a kombucha venture with fellow course mates. She completed a URECA research project on neural response in zebrafish to understand how the human brain processes fear. She participated in the NTU PEAK leadership development programme where her team collaborated with Roche Pharmaceuticals to present a solution to a business case problem, for which she received the Most Promising Leader Award. She also learnt basic coding, which inspired her to join the Singapore-India Hackathon 2019 with her hallmates to see how she could "apply biology and psychology to a seemingly unrelated field".

Despite her busy schedule, Stella managed to find time to pursue other interests and hobbies. She was an active NTU Hall 2 resident, a hip-hop dancer with the NTU MJ Hip-Hop Club, and went to Canada for a student exchange.

Now a management associate at Woodlands Health, Stella hopes to continuously upskill and take up a role where she can "work on diverse problems that cut across various domains each day, which allows me to broadly apply my knowledge and synergise them to build a viable solution." 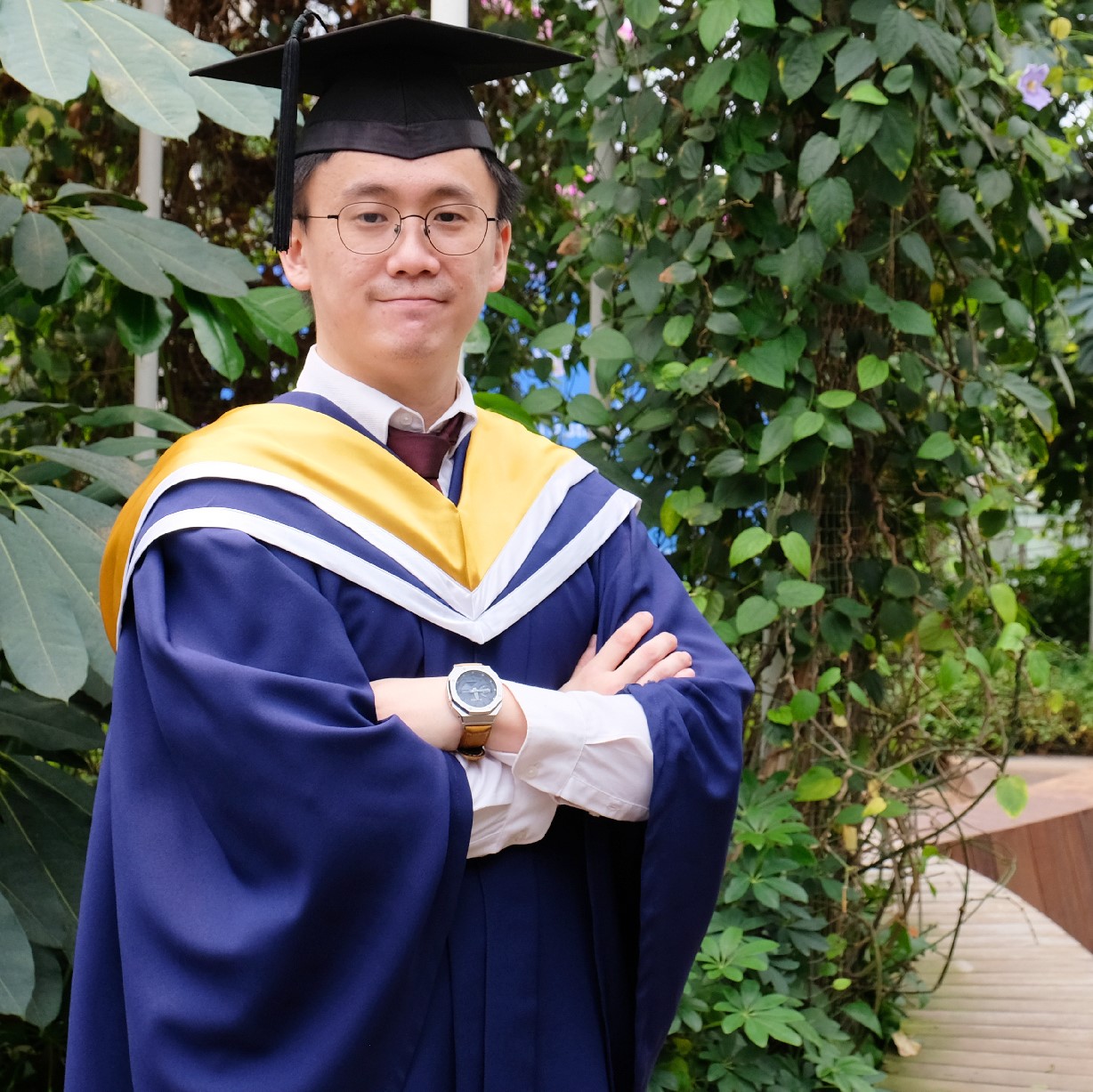 "I have always been a problem in classes, even in primary school. I was always being sent out of class and getting into fights. I was hard for my teachers to handle and life in school felt meaningless," recalls NTU's Mechanical Engineering graduate Samuel Fong, who was expelled from polytechnic twice for playing truant, missing exams and failing his modules.

In time, he began doubting himself and felt that he had let his parents down. "I could tell they were just really disappointed, and I was starting to think maybe they felt like nothing would work on me anymore," he told The Straits Times in an interview. Samuel said that he had struggled in school during his younger days, partly due to his attention deficit hyperactivity disorder (ADHD).

Things began to improve in 2016 after he re-enrolled into a polytechnic course for the third time. Samuel set himself a goal to attend classes every day. "It wasn't an overnight change. I didn't wake up one day and find that everything was  different. To me, starting to do well was not about leaping to the moon – it was about consistency and gratitude to so many who helped me along the way."

After eight years of going in and out of polytechnic, Samuel was offered a place in the mechanical engineering programme at NTU's School of Mechanical and Aerospace Engineering via the University's aptitude-based admissions system in 2018.

However, university life was not a bed of roses for him. "Adapting to the pace in university took quite a while, in terms of time and effort. I had to devise a better way to learn for myself. Instead of just studying passively, I learned to ask more questions. Even if I asked questions, sometimes I am unable to grasp the concept immediately, it takes some time for it to sink in."

Despite the challenges he faced as a university freshman, Samuel soon found himself enjoying the modules, especially those that required designing and drawing, such as creating CAD drawings of components. "It makes me feel I am moulding the components and seeing the final assembly spring to life," he said. "The sugarcane machine project in the Machine Element Design module and the challenge of designing a load transporter capable of scaling stairs in the Engineering Design module allowed me to appreciate the intricacies of the common machineries that we see in our everyday lives."

Asked about his memorable moments at NTU, Samuel said that NTU lecturer Dr Ho Shen Yong's experiment demonstrations during lectures were "fascinating to watch". He misses those times staying late in the computer lab rushing to complete projects and going for supper with his teammates afterwards. 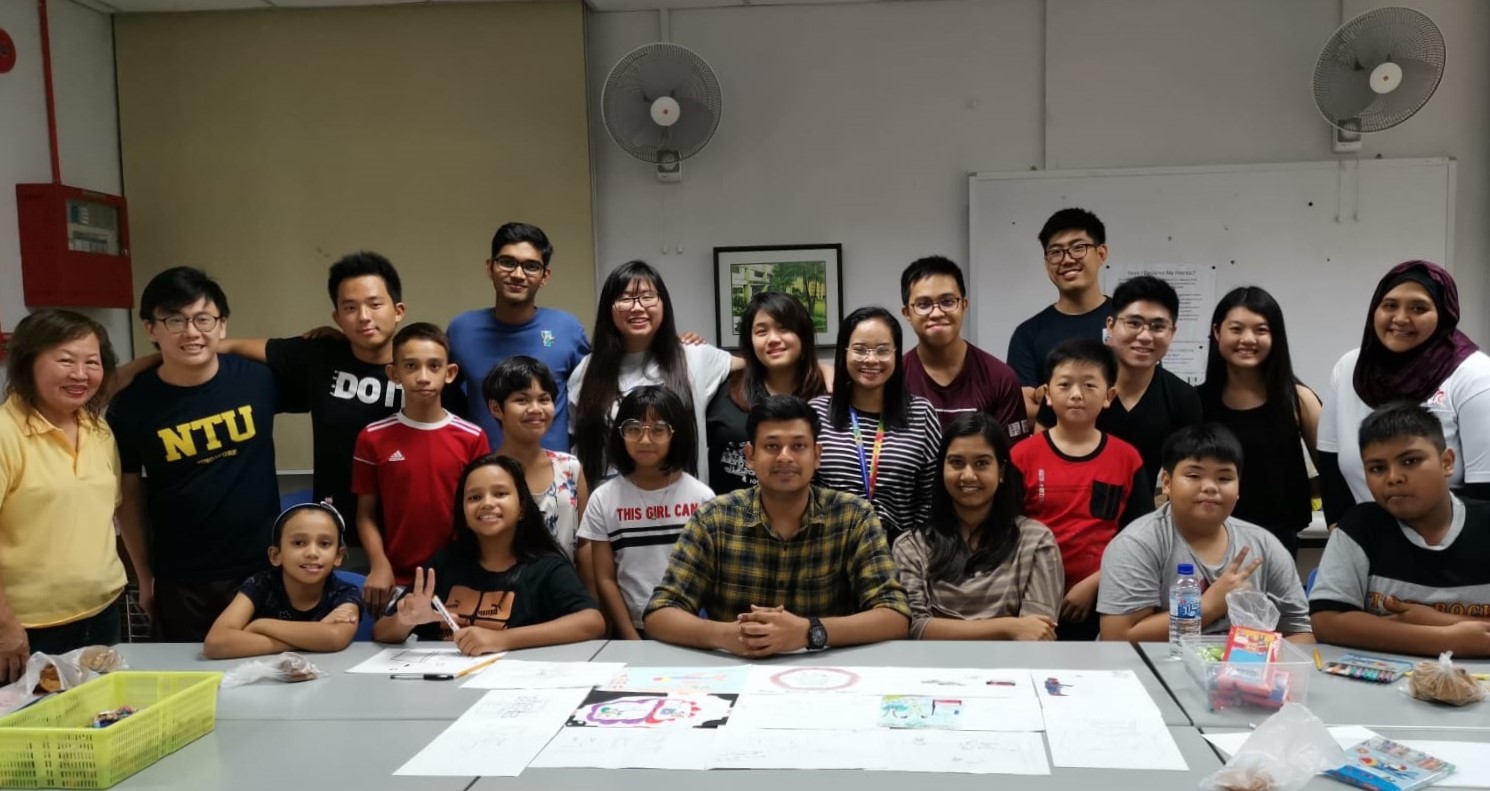 During his time in NTU, Samuel found time to volunteer at Happy Children Happy Future and SHINE Children and Youth Services, helping underprivileged children in their studies. "Relating to my experience dealing with failures… I keenly felt what it is like to be neglected, dejected, and feeling hopeless. While our experience may not be entirely congruous with the children I work with, I wish to show them that they are not alone, and everything is not hopeless just because they may not be performing well academically right now."

His resilience and hard work paid off. Samuel made the Dean's list in his final two years at NTU and graduated with high distinction. He also scored a scholarship from insurance firm Aviva, where he now works as a Data Analyst. He is considering becoming a teacher one day to help kids who are in the position that he once was in. 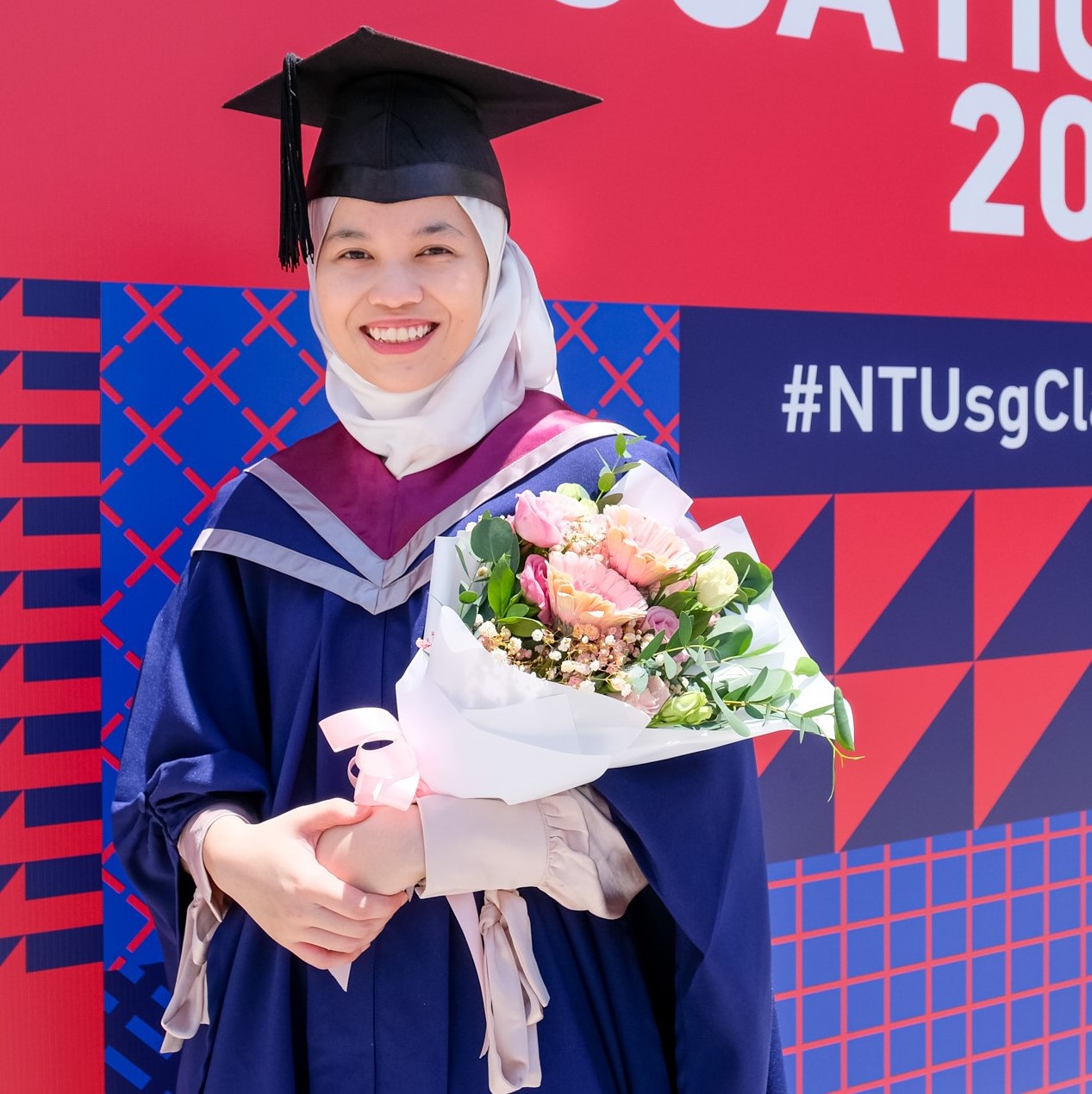 When Nadia Nasuha was twelve, she saw how her father struggled with cancer. "It was heart-breaking to see his health deteriorating. But I witnessed how my father faced his treatments bravely and it was uplifting and inspiring," recalled Nadia, whose father is in good health today. The Lee Kong Chian School of Medicine (LKCMedicine) graduate is now a House Officer at Changi General Hospital in the Orthopaedics Surgery department.

Her father's battle with cancer spurred Nadia to pursue medicine. "I wish to embark on a career where I can help others directly with my knowledge. I wish to be a doctor who understands my patients as people. I want to also learn from them, treat them, and accompany them during their personal battles to recovery," she said.

Nadia joined LKCMedicine in 2016 as she was attracted to the school's unique pedagogy - Team-Based Learning. It emphasised collaborative learning and teamwork, which she felt are vital for doctors who work in multidisciplinary teams. Nadia was a beneficiary of the Lee Kong Chian Bursary, given to students who require financial assistance when pursuing their first MBBS programme at NTU. 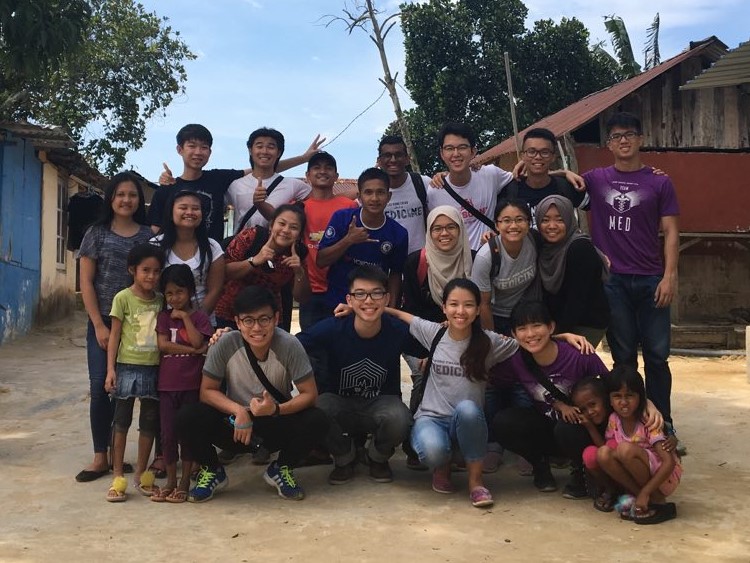 She vividly remembers her overseas community involvement experience in Project Daya that took place in Batam, Indonesia. "Back when we were able to travel, my peers and I would make quarterly visits to Batam. We conducted door-to-door health education to empower villagers with health knowledge. Being able to share beneficial knowledge to those who may not have the opportunity to obtain the information was heart-warming and satisfying, knowing that I was able to help them lead healthier lifestyles," she said.

Nadia fondly recalled both the friendships she has forged during her five years in LKCMedicine and the people who supported her along the way. "The LKCMedicine culture is very welcoming and friendly, with a strong tradition of giving back. My friends and seniors were always willing to give a helping hand whenever I faced difficulties, and this made my journey in medical school a little easier. I could not have reached where I am now without their help."

Nadia looks forward to exploring Family Medicine or Palliative Medicine in the future. "I am still very early in my career and would like to do postings in these departments and gain experiences before making my final decision."