The last thing that a student should worry about in school is money, says Mr Vincent Foo (NBS/Class of 2003). And for that reason, he has chosen to create a bursary to help needy students at NTU.

Vincent set up the Choo Gek Beng and Foo Chow Fu Bursary in his parents’ names to express his gratitude for the sacrifices they made to put him through university despite their “meagre monthly incomes”. Vincent with his mother, Mdm Choo Gek Beng, at The Fern, a renewable energy artwork located at the NTU North Spine.

He had initially thought that setting up a bursary would require a large sum of money – to the tune of a few million dollars – but when he learnt that that was not the case, he decided to give it a go and pledged S$40,000 over four years.

Last year, Vincent committed an additional S$30,000 as many people continue to face hard times due to the pandemic, bringing his total pledge to S$70,000. He hopes to continue funding the bursary beyond 2023."
"Growing up in a low-income household, I remember struggling constantly with financial stress,” says Vincent, whose mother was an office cleaner, and his father, a security guard. “They worked tirelessly as they had to provide for the family.”
“My neighbours had many toys and it felt like a luxury,” the 43-year-old real estate investor recalls. “As I didn’t have many toys, I used to sit at the corridor outside my neighbour’s grille gate to play with him.”
Although finances were a strain, Vincent's parents were still determined to put him through university. “Education is very important to my parents because during their time it was a luxury to be educated and go to school,” he says. His father was educated up to secondary school, while his mother did not get formal education. He remembers her telling him: “Don’t be illiterate like me, you must learn more.” 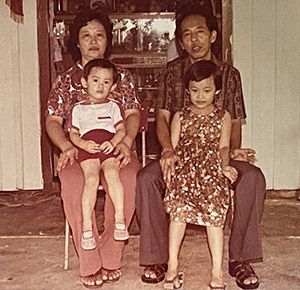 So when he could, he made sure to do whatever odd jobs he could find to help ease the burden. When he was in secondary school, he worked during the school holidays as a factory odd-job worker. While at NTU, he juggled tutoring and part-time administrative jobs.
“Fortunately, my life changed when I became a recipient of an NTU bursary. The bursary provided me with the crucial support I needed and helped alleviate the heavy financial burden my parents and I faced,” says Vincent.
“Today, I am a proud NTU graduate who has found success not only because of hard work and determination, but also thanks to the generous donors who aided me during my difficult times and made the bursary possible.”
“That is why I think bursaries are important.”

Vincent hopes that he is able to do his part to help disadvantaged students “attain a holistic education unhindered by financial difficulty and be inspired to also pay it forward in future”.

"The kindness of donors has supported me with my school allowance so I can work less and focus on my studies and  spend more time with my family. The bursary also helped pay utility bills. "  - Mohamad Salihin Bin Mohamad Kassim, NTU Bursary beneficiary

Bursaries are awarded to financially disadvantaged full-time NTU undergraduates. This Bursary Fund is supported by students,  alumni and friends. If you would like to make a positive difference to help needy students, you can make a donation of any amount today .