​Nanyang Business School (NBS) alumnus Jia Cai Lau (Class of 2016) has recently been listed in the coveted Forbes 30 Under 30 Asia, under the social entrepreneur category.

As we reached out to Jia Cai to congratulate him, we also took the opportunity to ask him to share his thoughts about his feature on Forbes, as well as his NBS journey and experiences in TreeDots.

"I am very honoured to be featured in Forbes 30 under 30 Asia. It is an affirmation of our business and the impact it has on the greater community. It gives us the drive to continue our effort," said Jia Cai.

Having graduated with a Bachelor of Business (Accountancy), Jia Cai shared his undergraduate experience – admitting that the undergraduate programme was the toughest part of his entire education journey, but also the most enjoyable part. Despite the rigorous three-year accountancy programme, he enjoyed learning and acquiring the knowledge and skillset that he knows will come handy in the future. What made his journey more fruitful was also the support from his fellow peers and professors, who were always there to provide a helping hand or guidance. It is the "kampong" spirit that makes Nanyang Technological University unique, added Jia Cai.

Jia Cai shared on a personal capacity, the rigour of the programme strengthened one's mind and his first job right out of university as an auditor prepared him well for the tough times. During the programme, he also had the opportunity to pick up classes and seminars that are out of the programme scope such as trading and investing, programming, which helped him grow so much over the period of time.

When asked how TreeDots came about, Jia Cai said it was a casual conversation between him and his co-founders, on the issue of food loss and this idea of redistributing unsold inventories. The conversation was brought up while he was having his exchange in Germany –  he saw many efforts by the different food companies trying to distribute unsold inventories by selling it at a discount in the store; something which is not seen in Singapore. After the conversation, he and his co-founders further researched into the area and noticed that majority of the food is lost during the B2B process of manufacturing to distribution and there was not a solution for it. Hence, they decided to go ahead and test the idea out. 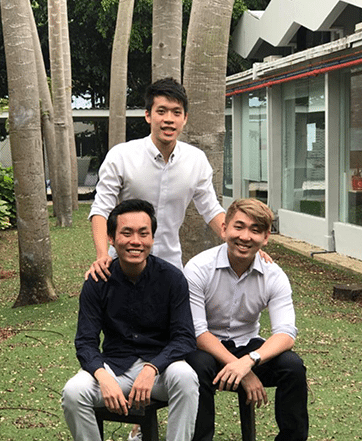 Jia Cai considers the amount of food that they managed to redistribute to the other businesses, as his biggest achievement. As of last year December, they have moved approximately 919T of food since the founding of the company. However, Jia Cai also had his fair share of struggles. He and his co-founders faced many obstacles in the business, given that this is a traditional industry with many inefficiencies that exist in the system. Not to mention, given their backgrounds in finance & accountancy, diving into a full F&B business was a challenge on its own. Fortunately for them, they have a great panel of mentors and advisors who guided them along the way on solving the obstacles one by one. It is also a plus that the company is very data driven and tech centric, hence they turned to technology to come up with scalable solutions for any problems they faced.

Jia Cai and his co-founders plan to expand TreeDots beyond the borders of Singapore by bringing the idea to other neighbouring countries like Malaysia. They are also exploring cross border transactions to move greater number of products across border. He believes that these initiatives will greatly broaden the impact of their efforts.

Jia Cai also shared his experience of being be a part of the President's Challenge Social Enterprise Award 2019. He was very honoured when TreeDots became a finalist. Despite being a relatively young start-up, to be given the opportunity to grace such a prestigious event, was a result of their hard work. He and his co-founders felt very appreciated and recognised for the impact that they have been driving.

This is an excellent reflection of NBS's goal to help leaders innovate, transform, forge new paths, create value, and deliver impact. We wish Jia Cai the very best in his current and future endeavours!

Our Alumni, Our Inspiration

Falling in Love with Sustainable Energy