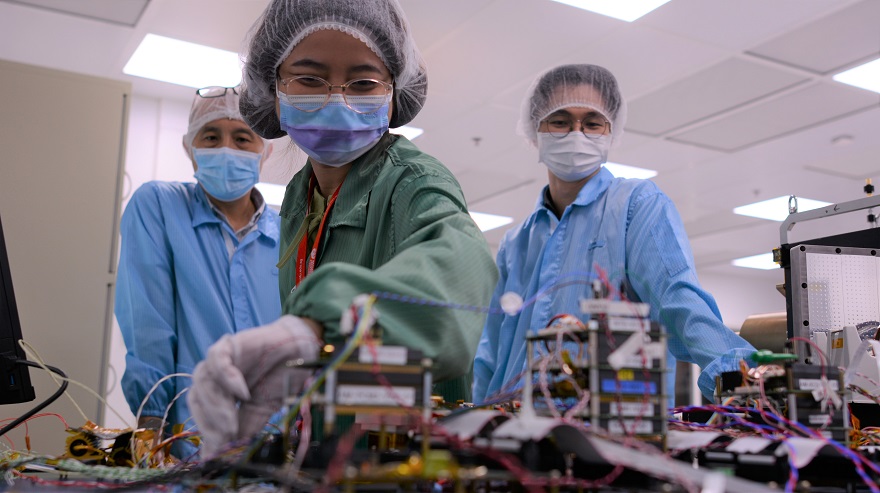 This pioneering project was announced today at the Global Space and Technology Convention (GSTC) held at Sheraton Towers from 9 to 10 Feb 2022. Minister for Trade and Industry Mr Gan Kim Yong was the guest of honour at the event and had also visited the consortium’s booth.
The announcement was followed by a signing ceremony for the Research Collaboration Agreement between NTU Singapore, Aliena, LightHaus Photonics, ST Engineering and NUS Temasek Laboratories, witnessed by Office for Space Technology & Industry (OSTIn) Executive Director Mr David Tan.
Led by NTU’s Satellite Research Centre, the consortium will build a 100-kilogramme remote sensing microsatellite – the size of a mini-fridge. Advising on the systems development and manufacturing of the satellite will be ST Engineering Satellite Systems, a joint venture between ST Engineering, DSO National Laboratories and NTU.
The new microsatellite will be designed to fly at a Very Low Earth Orbit (VLEO), some 250 kilometres above Earth, which is half of the Low Earth Orbit altitude (ranging from 500 to 800 km) conventionally used by many satellites, such as the X-SAT, Singapore’s first locally built satellite developed by NTU and DSO National Laboratories, launched in 2011.
Several developed-in-Singapore satellite technologies will be deployed in the microsatellite, including Aliena’s fuel-efficient thruster, which will enable it to fly at VLEO for over a year and high-resolution camera that is 20 times better than X-SAT developed by LightHaus Photonics.
This project is supported by Singapore’s national space office, the Office for Space Technology & Industry (OSTIn).